This was a big weekend, all around, for sports.  First, the Cyclocross World Championships.  And then the Superbowl.

I love watching cross, even if it has to be just on the internet.  They do a pretty great job of getting the cameras situated around the course so you can see all the action.

The Elite race was pretty predictable.  I picked the top three, in the correct order.  It wasn’t that hard.  But, I do believe Wout Van Aert when he said he had the legs to compete for the win.  He had a bunch of bad luck and maybe rushed it a bit trying to get back up to the front.

I’m not sure about having barriers that you can bunny hop.  I thought part of the sport was mandatory dismounts.  Mathieu van der Poel won the race, not because he could jump the barriers, but it did allow him some breathing room where he could ride the rest of the course within himself.

The women’s race was super exciting.  I didn’t pick the podium in that race.  I got two out of three, but not in the correct order.  I figured Marianne Vos would just do what she does and smear everyone.  Maybe a little too slick for her, I don’t know.  Maybe her hamstring being hurt?

Anyway, Pauline Ferrand Prevot  was a deserving winner.  It is funny how the reining World Champion on the road, in women’s racing, can double up and win the Cyclocross Worlds.  It isn’t that uncommon with Marianne Vos doing it a few times too.  That would be a real exception for the men.  Maybe Stybar?  Or Van Der Poel when he gets older?  Pascal Richard, a Swiss rider I road with a whole season when I was living in Switzerland, won Cyclocross Worlds and the Olympic Games in Atlanta.  That was a good doubling up.  Not in the same year, though.

Now, the Superbowl.  I’ve already stated that I’m not a huge football fan.  But, come on, that play calling by Seattle on the goal line was regoddamndiculous.  They had 3 more downs to run it, what, 2 yards, with the maybe the best running back in the NFL, Marshawn Lynch .  What was that all about?

I didn’t have any favorite, but I guess I was for Seattle since I’m in Seattle and there would have been some craziness on the streets.  I’m not sure Seattle deserved to be on the goal line.  That catch by Kearse was pretty lucky, so in reality, it should have been 4th and long instead of 1st and goal.

Walking around downtown Seattle last night, after the game, it was a morgue.  Really a lot of pretty unhappy drunk people.  This town is super depressed, rightfully so.  They had that game won and blew it.  For football, that was a pretty good sporting event to watch.

It is supposed to rain the whole next week here in Seattle.  It is raining pretty hard right now.  I took Trudi around yesterday for a couple hours, just touring the city.  It was wet, but not really raining.  I think it usually clears for a few hours sometime during the day.   Today it looks like it might be okay after 1 pm.

It is still sketchy riding around here.  Lots of paint on the roads.  Manhole covers, remnants of leaves.  That isn’t even taking into consideration the cars, pedestrians and other cyclist.  If I lived here, I would be falling all the time for sure.  Hopefully I can manage to be safe the next few days. 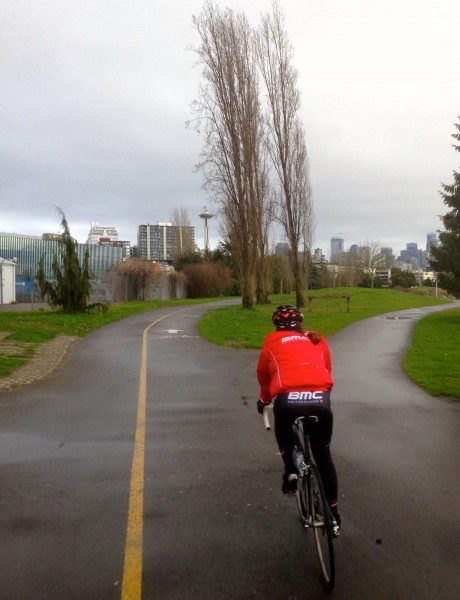 Trudi riding back towards town yesterday. 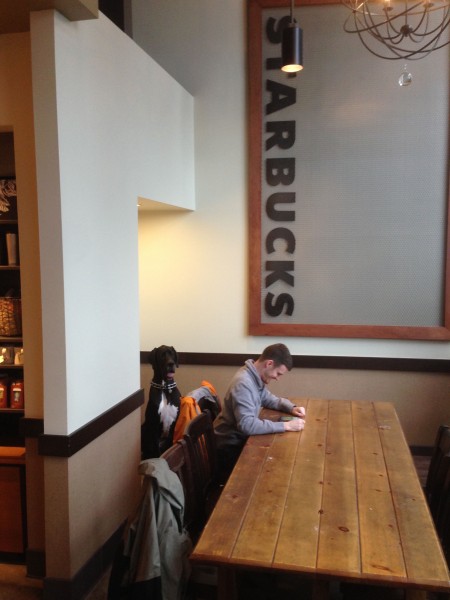 This might be the most dog friendly city I’ve ever been to. There were at least 4 dogs in a big Starbucks, on 1st Ave, at all times yesterday. 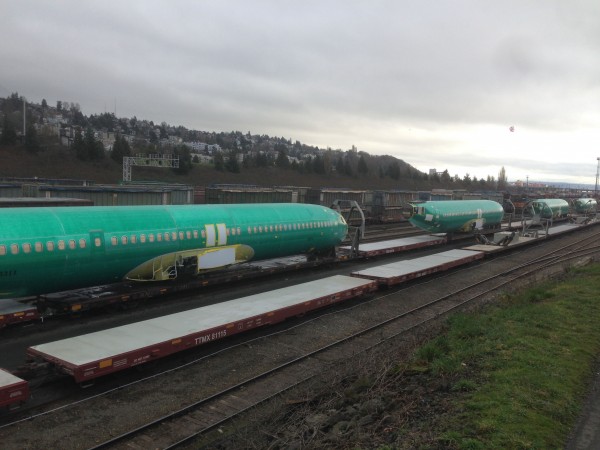 This is the home of Boeing, so I don’t know why it surprised me to see air plane fuselages on a train. 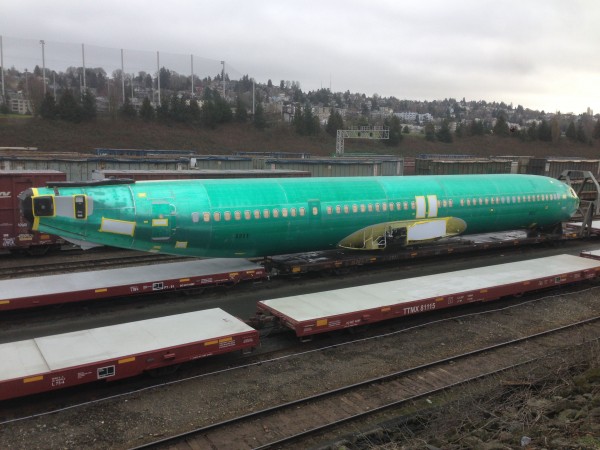 I would have liked to see the train moving though. 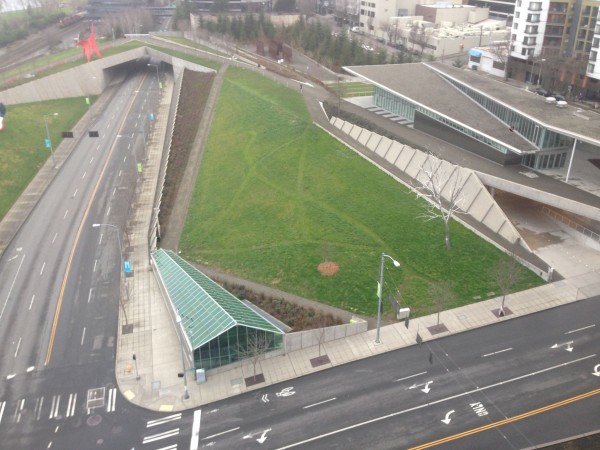 This was a picture out of the Walberg’s apartment during the Superbowl yesterday. It was a ghost town.