I never would have thought that my first race this year would be riding a 24 hour MTB race on a team.  But, that is what I’m doing, I guess.  My friend Vincent convinced me to ride The 24 Hours of Old Pueblo on his team.   It was a spontaneous decision that I’m still not sure how it got made.

I’ve heard of the race for years and it looked like a really good time.  The race is down by Tucson Arizona and they advertise it as “The Burning Man of MTB Racing”.  Sounds fun.  I am pretty competitive and usually wouldn’t be going to an event unless I though there was a fair chance to win.  Maybe we do have a chance to win, I really don’t know.  I don’t even know 2 of the other guys I’m riding with, so how would I know?

I’ve done three 24 hour events in my life.  The first one was the Spenco 500, way back when I rode on the Wheaties/Schwinn Pro Road Team.  It was a 500 mile race that you could race solo or on a team.  The race wasn’t really 24 hours, because we averaged way over 21 mph.  We won that event.  It was really good prize money back then, I’m thinking around $7500 to win.

The next two 24 hour races were the 24 Hours of Telemark.  Nordic skiing.  I skied both on a 5 man team and we won both times.  I think one year I skied something around 175 km, which was a lot at the time.  All three of the 24 hour races I‘ve compete in before have created life memories for me.  I’m sure this one will too.

Both on the bike and skiing, I really enjoyed the night laps.  At night it seems like you are going so much faster and it is out of the ordinary, riding, or skiing, at race speed, at that time of the night.

I have no expectations here.  For sure I’m going to try my best to do well.  But I have no experience at all, so it is going to be a learning process.  I just would like to enjoy it and see if it these events are something that suits my abilities.

I’m a little apprehensive about my physical ability to handle the race.  My hip is much better than even a month ago, I think, but the last couple weeks, it has been feeling a little weird.  I actually limped some just last week, which bummed me out.  I hate going backwards in the healing process.  But, it is easy to fall back to the limping stage if you are me.  I have to consciously try to not limp a lot of the time.  Plus, I’m really not in race shape for actually racing bicycles.  But, riding multiple laps, on a MTB bike, in February, might be just the thing?

I’m not too worried about falling down and hurting myself. It is about time I fall and get that over with.  My hip bone is healed.  It is just the muscles that don’t want to function correctly.  I’d like to get over the psychological barrier and just hit the ground hard, maybe not SO hard, be hard enough to know I can still bounce and not stick.  I did it a couple times skiing the Double Birkie after Christmas, but that was snow, not dirt, rock or concrete.

The race is in just two weeks.  I’d better get working on my MTB.  Other than Chequamegon, I haven’t done a MTB bike race in a year and a half.  Might be a little rusty, me and the bike.

All three of the 24 hour races I’ve competed in before have created life memories for me.  I’m sure this one will too. 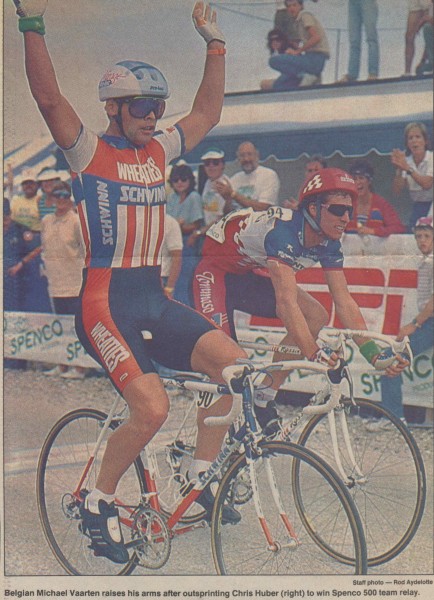 Michael Vaarten winning the Spenco 500. Michael rode the first lap, then went back to the hotel and ate, slept all night, then came back and rode the last lap. He was World Kerin Champion and was pretty much a ringer to win the sprint, even though Chris Huber gave him a good run for his money.

Click to enlarge. Check out Chris Petty’s time. The guy was unbelievable. When the group split at 2 am or so, he made the split with me, and Hegg and I’m not sure who else. There were 5 of us. After a few rotations at 28 mph, he said, “Hey Steve, do you mind if I sit on? I’m an individual.” He’d been riding for 14 hours at the time. I told him he could do whatever he wanted, he was incredible.