I officially kicked off the 2015 road season last night by going for an actual road ride on a road bike.  According to Strava, I’ve actually ridden 282 miles in January, but all those miles were on a cross bike, but nearly all on the road/gravel.  So, road season is underway.

It wasn’t all smooth sailing though.  I was doing stuff all day and didn’t get a chance to go for a ride until there was only an hour and a half of daylight left.  It was pretty nice, close to 40 and pretty sunny.  I overdressed because I’ve been feeling a little under the weather the last couple days and know, by experience, that the easier you ride, the more clothes you need to wear.

I checked my tire pressure and was surprised that it wasn’t below my minimum, which is a thumb going in easy, or around 50 psi. I nearly always ride pretty low pressure training.  I rarely put more than 80 psi in and don’t add air until it feels squishy when I’m standing climbing.   The roads around here are nearly all chip and seal, so they are pretty rough and lower pressure makes for a smoother day.  When I’m out in California or Colorado, doing long descents, I tend to pay way more attention to it.

Anyway, I start out the driveway and my bike is handling like it is going to throw me on the ground, like no gyroscopic effect.   I can tell my headset is not working properly.  I stop and move my bars back and forth.  It feels pretty rough, but not enough to be causing such a horrible ride.  But, something is really wrong, so I turned around and went back to the garage.

I took my handlebars off to take my fork off.  My Erikesen has a 1 1/2″ bottom cup and 1 1/8″ top.  This allows for a tapered steering column on the fork and makes for a much stiffer ride. The bottom bearings were totally seized.  Like frozen more than any bearing I’ve dealt with.  I’m really not sure what happened there.  I usually keep my bike in pretty good shape and was really surprised.  I power sprayed my road bike, along with my cross bike, before Christmas, since I’d been riding on some gravel and there was a bunch of salt on the road, but I try to not spray directly into the bearing of my hubs, bottom bracket or headset.  Obviously I did, because rust doesn’t happen without moisture.

It took me forever to get the bearings working.  They were sealed and wouldn’t move at all.  I took the seals out, soaked them in rust penetrator liquid for a bit and then put them in a vise and used Vise-grips to free them up.  I finally just took them apart and used steel wool to get them working, somewhat.  They have something like 30 individual bearings, so it was sort of tendious.  By the time I had them back into my bike, it was dark.  I decided to go riding away.

The ride was great.  I don’t usually just go out and ride at night, on the road.  If I’m riding at night, I tend to ride gravel or off-road.  Riding at night makes it seem like you’re going super fast.   I ended up riding harder than I’d anticipated.  I had a 19.3 mph average, with 241 a watt average.  Much harder than I had thought I’d be riding when I headed out.  Probably from the frustration of the repair?

Anyway, while I was riding I was thinking about getting in some bigger miles and how it is so important early season, to get a base.  It is so much harder getting in a base when it is cold.  It is a double whammy to your body, riding long hours, plus trying to stay warm.   I’m normally pretty naturally/generally fit, so I can usually just start off with a big block and it comes pretty easily.  But with being so broken all last season and only have raced once since May, I’m sort of in new territory.

I saw this article over at Velonews, by Phil Gaimon where he, so eloquently, explains his experiences with peaking or not peaking, historically.  He has a few issues with acronyms,  but that is to be expected from a professional athlete.

I’ve never been big on peaking.  I try to stay consistently fit all season long.  I think there are too many important and fun races to do, nearly every month, to be “out of shape” anytime.  Plus, I find it very hard to control when you are injured or get sick and then all that peaking is wasted, so I find it more rewarding to try to be good as much as possible.

I tend have a few times during the season when I’m going considerably better and during these times, I try to get to the biggest race around.  You can’t wasted good form on training.

I’m planning on getting somewhere warm  and getting in some big miles.  But don’t stress if you don’t have that ability.  Cycling is a great sport because there are races throughout the year and it isn’t imperative that you put in big miles in January or February, even March.  April is when I used to start riding consistently, and it worked out fine.  All this social media gets us all antsy, seeing the miles all our friends and competitors are doing.  It doesn’t matter, necessarily, when you start your base miles, it just matters that you do them. 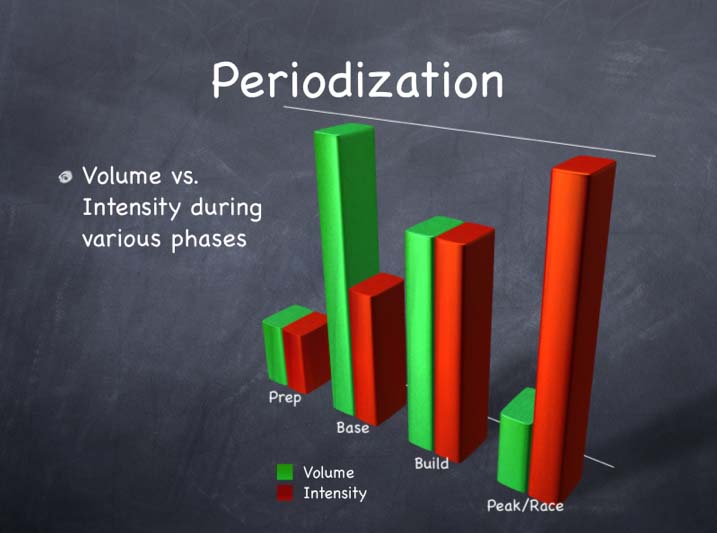 The illustration here is from CXmagazine.  The article was about doing base training in June, for cross, but it works anytime of the year.