I’m not really into analyzing bike races.  You could do it all day and probably not be more than 25% correct.  There is so much stuff going on with each rider, that it is impossible to really know what truly happened.  That is for sure the case yesterday at Cyclocross Nationals in Austin.  I might have got to see more of the race, sitting in a basement in Lawrence Kansas, than actually watching it in person in Austin, but I only got to follow what the cameras allowed me to see.

With that said, it is easy to analyze what happened yesterday in Austin in the U23, woman’s and men’s Elite races.  At least at the front.

Logan Owen is really just that much better than everyone else in the U23 category.  He has now won 11 straight National Championships.  That isn’t a fluke.  The course was much more tricky when he was racing than when the Elite men were competing a couple hours later.  More moisture and less of a ridden in groove.  But, he rode a pretty flawless race and won easily.

The women’s race was interesting.  I missed the start because Vincent was trying to stream the BTB TV directly from Youtube and it wasn’t streaming.  We started it about 1/3 a lap in, and Katie Compton was buried.  At least for her.  I have no idea how she got back there.  After the race, from her interview, it sounded like she wanted to start easy and then ride into it.  In my opinion, that is a horrible tactic.  The chances of having a catastrophic issue back there trying to pass people, especially on the first lap, are multiplied by 20.

She is so much better than most other American women, that she should be able to start at the front and stay there.  I would love to get a few weeks of riding with Katie.  She is so good in most aspects of the sport, but missing some really important ingredients.  Enough that she sometimes struggles early in big races when she should really be settling in.

But, it took less than a lap to catch the front and she led over the finish line after one lap.  It was pretty much done from then.  I don’t think Katie was having her best day on the bike, but it was good enough.  The fight for 2nd was good until Rachel Loyd fell hard and screwed up her bike a bit.  That was just enough to separate her and Kaitlin Antonneau.   That was how it finished.  Kaitlin rides cyclocross beautifully and is only going to get better.  It seems like she can ride in treacherous conditions about as good as anyone.  Her finishing less than 30 seconds behind Katie was a victory in itself.  Rachel keeping it together after crashing and not getting rattled, still finishing 3rd, is also a victory.  They both rode pretty great.

The men’s race, well it was pretty predictable.  We all made our pre-race predictions.  I picked Powers winning, Page, 2nd and Summerhill 3rd.  Summerhill finished 4th, ruining a perfect guess.

I wanted to pick Jonathan Page to win, but the course had dried up too much by the time the men were ready to start.  It wasn’t nearly as slick as when the U23 guys rode and the lines were starting to form.  I think if it would have be just a tad more wet, Jonathan, and maybe even Zach McDonald, might have given Jeremy Powers a little more of a challenge.  Not that Jonathan didn’t keep Jeremy right there.

I was mildly amazed how many guys were riding into the 2nd pit to change bikes, when the pit line was maybe 3-5 seconds slower than the racing course line.  Even the guys racing for 4-6 kept doing it.  If I would have been there, advising a rider, I would have told them to stay out of that pit as much as possible.  But, from the streaming video, it was hard seeing how gummed up the bikes were getting, so it is really hard to know exactly how many times they truly needed to get a new bike.

Jonathan Page had bad luck again, flatting early.  I was mildly surprised that not more riders flatted yesterday.  Rocks with mud are usually a recipe for that, but it seemed that didn’t really happen much.  I think Zach McDonald might have flatted too, so I guess 2 out of the top 3 did, so maybe it was more common than it seemed.

Jeremy Powers really just rode like a machine.  He didn’t even look like he was trying that hard.  That is a sign that he was pretty under control the whole race.  He was a very deserving winner.  He’s concentrating on going fast one day a week.  And it seems like it is working out for him perfectly.  Hopefully he can keep his season long form until the end of the month for Worlds in Tabor. 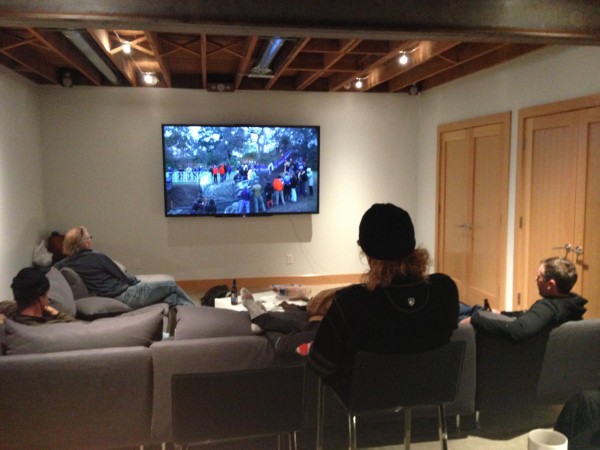 We rode 35 miles over to Lawrence to watch the race on a big screen at Matt Gilhausen’s house. 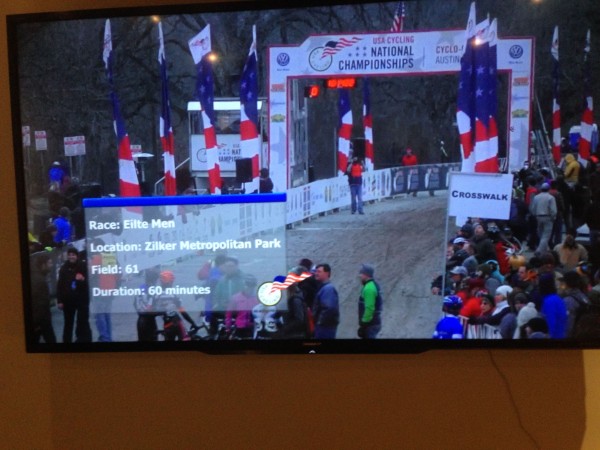 61 starters. They could have used a few of those Masters that they ruled out of competition. 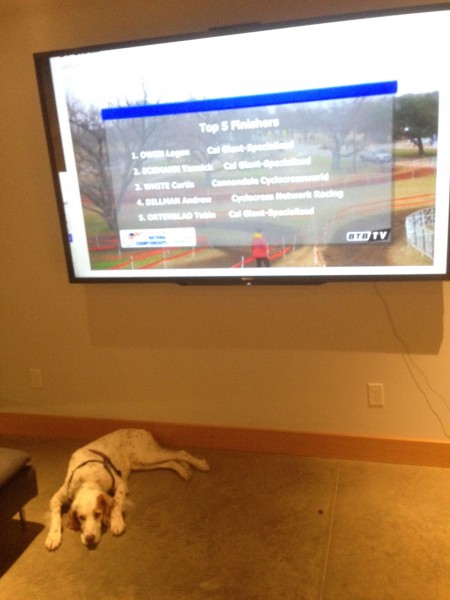 Bromont was uninterested in watching the race. He much prefers seeing it live.