Yeah, the title is right.  But, it isn’t as bad as it sounds.  Yesterday, I decided I needed to suit up and go out to set a precedent and get a ride in, since it was January 1st.  It was in the 20’s and there was a couple inches of new snow on the roads, on top of 6 inches a couple days ago.

I had my cross bike with tubeless Hutchinson’s Bulldogs, so it wasn’t going to be that big of a deal, I thought.  The snow was pretty loose and since not many cars had driven on the road, it was pretty unpredictable.  My front wheel kept breaking away and I had to just let it float.  I wasn’t that worried about crashing, especially since my “broken hip” has been pretty stellar ever since I got up here and started skiing.

I started out and thought I’d just ride to Cable, which is about 4 miles away , and see how the bigger roads were.  A couple cars passed me from the other direction and the blowing snow coming off their wheels nearly blinded me.   It was pretty slow going, maybe around 12 mph, but it felt great turning my legs in circles again.  I had ridden since Christmas Day, which seems like an eternity ago.

About 10 minutes into the ride, I see 2 kids walking in the middle of the road with their dog.  As I approach them from behind, the dog sees me and runs directly at me, full speed.  I wasn’t too concerned.  I’m not scared of dogs.  He veered last second, did a U-turn and start chasing me.  When he got his mouth close to my leg, I just put my hand down and thumped his nose.  He seemed pretty harmless.

But, he kept going and as I rode past the kids, one of them tried to tackle him.  He veered again and I thought he quit, but next thing I knew, I feel this tug on my right leg and look down and the dog is back, and he had chopped down on my bootie.  I was surprised and just reached down and wacked him on the snout again.  He let go instantly and stopped.  He didn’t get a hold of me and draw blood, but he ripped a hole in my bootie.  I can’t think of the last time a dog actually got a hold of me.

Then I rode just a minute or two up the road and was turning a sweeping left corner and my front wheel slid out and I was on snow covered ice.  I thought I saved it, but nope, hit the ground pretty hard.  Luckily, it was only a flesh wound.  I landed on my bad hip and it was good.  My neck, which I’d sprained pretty good on the long ski day last Saturday, got tweaked a little again, but that isn’t so bad.

So, I was fairly unscathed even though the ride couldn’t have gone too much worse.  I only rode 8 miles since when I got to Cable, they had put down salt and the road was a mess, so I just rode back.

We’d already hiked in the fresh snow two hours in the morning and then we went out and skied under a bright moon for 15 km, so I had nearly 3 1/2 hours of exercise in my between the three different adventures.  I felt pretty good skiing.  The new snow made it super stable, so I didn’t have to use all those micro balancing muscles I use when it is icy.  It was pretty great.

Today we’re gonna ski the whole Birkie Trail from the North End to Hayward.  It’s 40 km.  It isn’t supposed to be warm (16 degrees) until midday, so I think we’ll wait until then.

Hopefully, yesterday was really a good omen and I got that stuff done early and the rest of the year will be incident free. 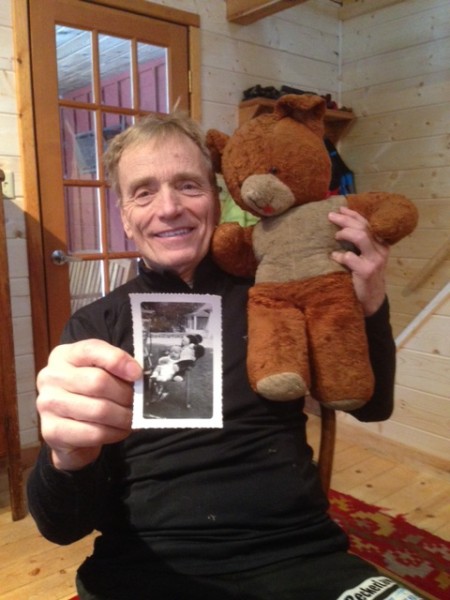 Here’s a picture that Keith took of Dennis with a bear that his father got for him on his birthday in Paris at the end of World War 2. 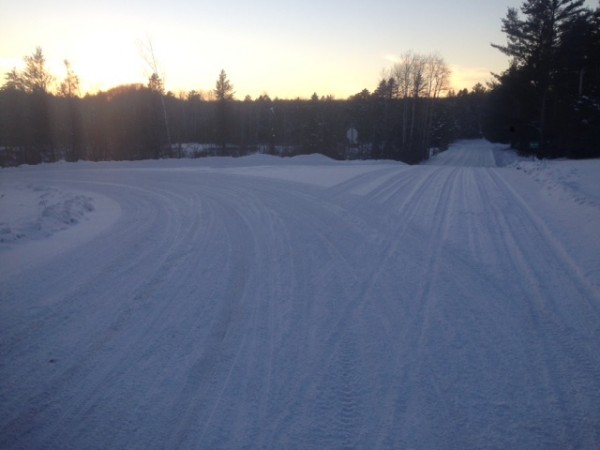 The road I was riding on yesterday.