Okay, I’ll state it right up front, I’m racked.  Not as badly as I could be, but for sure, racked.  Yesterday was the probably the hardest Double Birkie I‘ve done, and I’ve done a few.  The main issue was that it snowed somewhere between 4 and 6 inches super early morning, after they had groomed.  So there was a semi-deep layer of snow covering the whole trail, which made it nearly bushwhacking most of the day.

I’m not really sure how many people started down at Fish Hatchery at 8 am.  It seemed around 30 people for the photo, but I think some guys had already left and a few were late and started behind us.  Normally a bunch of people start at OO and ski south, but pretty much no one did that because it was groomed a bit at OO and then it abruptly stopped about 3 km south.

There were a bunch of “real” skiers doing it.  Brian Gregg and Adam Swank, but luckily I didn’t really ski with them.  I skied most of the way up to OO with Bryan Fish, US Ski Team Developement Coach.  He was back here on a holiday break and it was nice he could get a long ski in.

Anyway, it stayed pretty tame and I got up to OO, about 20 km in, okay.  Okay, meaning pretty tired, but not destroyed.  The next 20 km didn’t go so well.  It was groomed, sort of, up to Boedecker, worse again.  I was getting tired by then and not picking my skis up enough, so was tripping more.   I was tripping more going downhill too.  I fell 3 times, once really augering face first into the snow.  All the way down to the grass.  That was the my biggest issue for the rest of the day.  I hurt my neck and shoulder.

Up at the North End they had soup and cookies.  I ate a bowl of soup, ate some cookies, drank a coke and headed back south.  I really didn’t have any desire to ski any more.  I’d already been out nearly 4 hours and was pretty tired.  But, it was the principal of the whole thing.  You can’t go quitting things because you are just tired and it’s not much fun.

I didn’t have anyone to ski with on the way back, so I stopped and put in earbuds.  So, I was listening to music most the way back to OO.  Luckily, my dentist friend from Winona, MN, David Gilmer, was skiing up north from OO and met me.  We skied about 10 km together and the trail got pretty good, at least compared to the rest, back at Boedecker.

David turned back around at OO to ski back north again to meet his wife and I just kept going south.  I had 20 more kms left.  I felt pretty good right then, but that didn’t last long.  Just where the lights stop, it got deep, the snow that is.  And the snow stayed deep all the way back.  I was pretty much doing single stick up all the hills.  My lower back was getting pretty tweaked by this point, probably from lifting my legs so high to clear the fresh snow.

At Mosquito Brook about 5 km from the car, I ran into a Birkie board member, I think John Garrett.  He ski with me back to Bitch Hill.  I told him I wasn’t too happy with the grooming, as did a couple mother’s that were waiting from their kids that were skiing down from the North End.  He said he would hear about “what happened” later that day.  I think what happened is that they just didn’t groom the trail after it snowed.   I know there are reasons for this, but it is probably the biggest weekend of the year up here, after the Birkie weekend itself, so it would be good time to show case, maybe the best ski trail in the world.  It wasn’t a good showing in that regard.

Anyway, I pretty much walked up Bitch Hill.  There were only a couple ski tracks in the snow going up.  I got back to the car with plenty of light to spare, which was nice.  I think it was around 82 km, which is a little over 51 miles.  Pretty far and pretty long to stand up.  I have to be pretty stoked that my hip was good.

I drove back into Hayward and got a large hot coffee.  It was great.   Then back to Dennis’, showered and headed to the Rivers Eatery for dinner.  Mick had a bunch of “test wines” that he just sat at our table.  Like one bottle per person.  It got a little ugly, but not stupid ugly.  Stacie, my orthopedic surgeon friend from Louisville, came over to chat.  We stayed pretty late at Mick’s.

Stacie had given us some Christmas presents, plus we had some presents for the Walberg’s and Bill.  We opened them at Dennis’.  I got some good stuff.  Stacie gave me a Lululemon shirt and hat.  Keith and Catherine gave me 3 Ralpha base layers tops.  Pretty great.

Dennis went to bed and we went back to the Kansas garage.  My right foot had been throbbing and two of my toenails turned black.  The problem was that I over tightened my ski boot and my foot got cold, so I loosened it up about an hour out, too much and my foot got sloppy in the boot.  I never considered that my toes were jamming up to the front of the boot.

So, I needed to relieve the pressure.  Luckily, the blood was all the way to the top of the nail, so all I needed to do was stick a needle under the toenail and a geyser of blood came out of each.  The pain instantly was gone.

I slept pretty great and, but am pretty tweaked.  Mainly  my neck and shoulder from falling.  Plus, my toes are super tender.  I’m not so sure about skiing much today.  Everyone here is itching to get out, so I’ll probably tag  along.   I’d really like to just go out and ride Fat Bikes, but I haven’t arranged one, as of now.

Okay, everyone is getting antsy, so I’d better try to catch up. 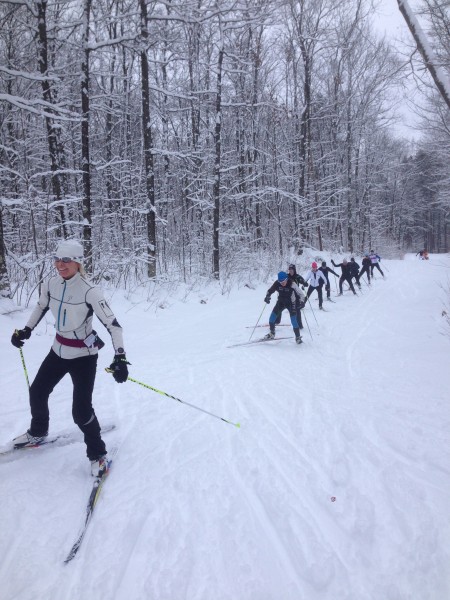 I like the look of guys skiing in line. 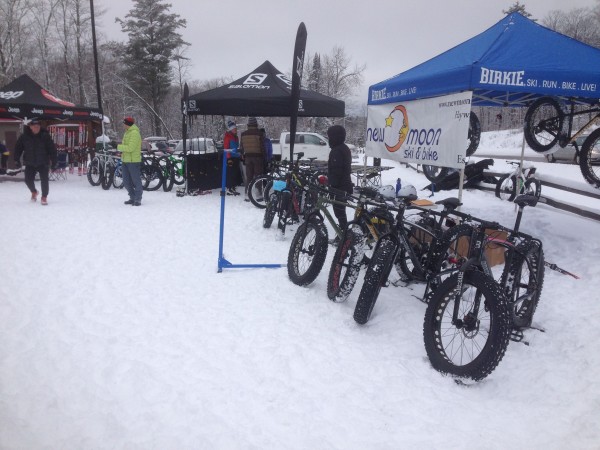 The bike shops were doing a Fatbike demo at OO. 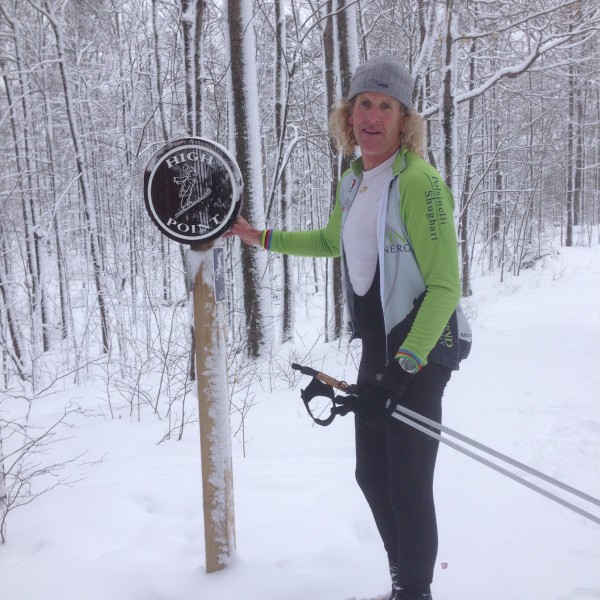 Portrait at the high point. 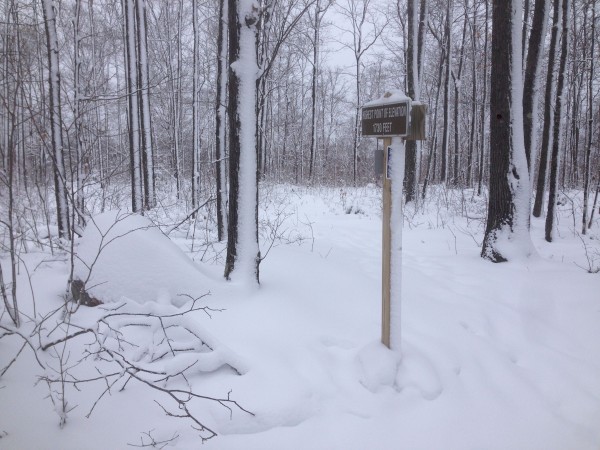 Other side of the high point. I spread the ashes of my friend Harold here, back in the 90’s so I always have a little private conversation with him as I ski by. Now there is a MTB singletrack coming right by the rock, so I come back here way more often.