I was hoping to change pace a little today and get into the holiday theme, but after reading a few articles the last couple days about Riccardo Riccò, I can’t help myself.

Where to start?  Obviously, by the guy’s actions, he’s not a smart man.  And that would be a generous statement.  But, we can’t just rely on his actions, he goes ahead and talks.  And that just more that emphasizes how he got to where he is in the sport.

Let’s go over some of his recent history.  First, the guy is killing everyone on the bike, finishing 2nd in the Giro, behind Contador, and then going to the Tour and winning a couple stages etc.  But, alas, he get’s popped for using CERA-EPO.  So, he serves his ban and makes his comeback.  But, once again, he has issues.

Next thing he knows, he’s  in an emergency room because he botched up a home blood transfusion and he nearly kills himself.

So, he goes and makes a ton of excuses and denials, but ultimately he gets a 12 year ban for a 2nd doping offense.

So, he won’t be able to race again until he is 40.  So he decides that he is going to travel around the planet and set records on all the most famous climbs.  So, in preparation for this, he is caught trying to buy EPO, that was stolen from a hospital, in a parking lot in Italy.  He said that “I was in the wrong place at the wrong time, the matter has nothing to do with me.”   Even though he had $1500 in his jacket pocket at the time.

So, he somehow stays out of jail, but keeps training and writes a book.  For some inexplicable reason, his publisher lets him speak at a book launch.  Maybe the publisher is brilliant because he knows Riccardo.

Anyway, he talks about testifying to the UCI commission on doping for 7 hours.  He said he gave “first and last” names of guys still involved in the sport that are involved in doping.  Wow, last names too?   And then after, called the commission a “joke” because they won’t half his suspension.

He did talk about racing and how he thinks it’s impossible to win a Grand Tour without doping.  And how everyone knew Ullrich was a better athlete than Lance, but Lance had better drugs and Jan couldn’t control his lifestyle.

His last statement is beautiful.  It doesn’t even need a comment.

“I wouldn’t make the same mistakes that I made. I wouldn’t dope, or I’d at least do it differently.”

Along the same lines –

These Italian guys are pretty unlucky, or just stupid, at least compared to the American guys that were “caught”.  Mauro Santambrogio was serving a 18 month suspension for EPO use.  His suspension was supposed to expire on November 2, 2014, but on October 22, he turned up positive for testosterone in an out of competition test.

Guess he’s gonna be sitting out a while longer.  Maybe he can join Riccardo on his climbing record attempt extravaganza?  They would make a great couple. 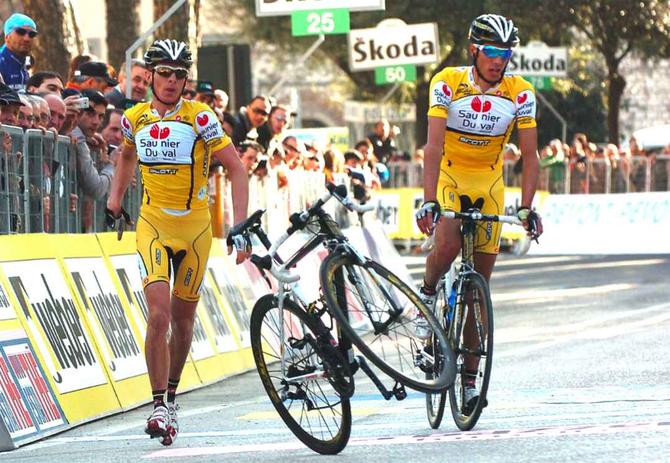 Maybe Riccardo wasn’t using all those drugs and was actually riding a motorized bicycle? Seems his bike goes so fast sometimes he can’t keep it under him.

32 thoughts on “Riccardo Riccò is an Idiot”