You know when all the best, new generation riders of American riders, say how clean the sport is, and how we need to believe, and then a current, systematic doping program is exposed within the Astana program, then it is all bullshit.

It’s not such a surprise that there are still full teams of riders doping, it is distressing that guys like BMC’s Tejay Van Garderen and Garmin’s Andrew Talanski say that the peleton is clean and we just need to believe.  They are experiencing the results of the doping first hand and they go and say it is all normal.

Tejay says – “I think the sport has turned a corner.” When asked about doping within the peloton.

And here are a couple tweets from Andrew after Danilo Di Luca, who contributed greatly  to the Padova investigation, made some public statements about doping within the pro peleton. –

Thankfully his statements are delusional. I wouldn’t be in this sport if it was not possible to succeed at the highest level and do it clean.

I guess Andrew, you were wrong and Danilo was right.

Here is a link to today’s Cyclingnews article about the results of the Padova police investigation released in Italy.   It says that Vino and his guys are still doping and dealing with Dr. Ferrari and his son, Stephano.   17 guys on the Astana team are using their services.   And yes, Tenerife is one of their favorite locations for blood transfusions etc.

Here’s a full list of the guys that are named in the investigation.  Vino is last, but not least.

So, UCI, it’s Wednesday.  Let’s hear what you have to say about all this shit. 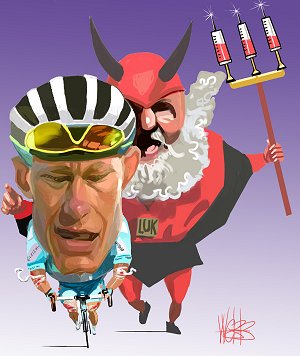