I was over at Big RIng Cycles, in Golden, CO, a couple days ago and talking to the owner, Scott, about bike costs and equipment.  He said that he sold a 23K road bike a few months back.  He said that it had a SRM on it, but the rest was just “regular” parts.

I was blown away.  I couldn’t add up the individual parts to get up to any number close to that.  We talked about high end mountain bikes and he said that it is really hard to get over $10,000 on the most tricked out mtb bike.  He said that he thought the manufactures and customers both realized that a 10K mtb bike could become a 3K mtb bike with one bad 2 hour ride or race.  So, there is a maximum that most people would spend, which makes sense.

But, the whole thing doesn’t make much sense really.  There are some really great bikes out there for less than 10% the cost of his $23,000 sale.  You’ll probably have to get some stuff 2nd hand, but that is part of the sport.  You’re not going to get 1000 gram carbon wheels, but you’ll get a bike that is much better than anything you could ride even 5 years ago.

I pretty much hate that the bike and components manufactures are changing everything so quickly nowadays.  How many different types of bottom brackets are there?  Shimano kept their freehub standard 8 speed through 10 speed.  Now the new 11 speed wheelset won’t work with 10 speed cogs.  I have a full garage full of 10 speed wheels that won’t work with my 11 speed shifters.

I like the practice of using my old road wheels for cross in the winter.  But with the choices of 10 or 11 speed, plus disc or rim braking, you pretty much have to have wheels dedicated specifically to cross, doubling up the equipment, thus the costs.

The new and the greatest equipment is a very attractive part of the sport for most cyclists.  It is for me, for sure.  I like the mechanical aspect of the sport.  I’d hate to just have to have a pair of running shoes and that was it for equipment.  Most hard core cyclists are somewhat equipment geeks.  But, there is a limit.

I feel so bad when I’m at a local criterium and there is a pile up in the Cat 4 race, or junior event.  Those guys are usually all buying their stuff.  And it is super easy to ruin $1000 worth of equipment in even a harmless crash.

It is getting ridiculous.   I have no problem with guys riding the newest and greatest stuff.  But, if you don’t have the means, don’t worry about it.  You can get a very good, competitive race bike pretty affordable still.  And it isn’t the bike that makes the rider. 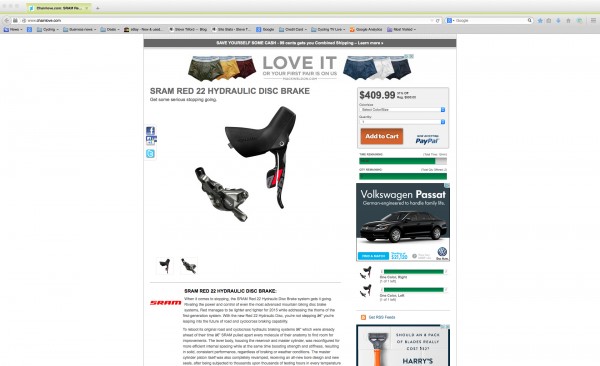 This is what got me thinking about this. Over at Steep and Cheap, each shift lever, left and right, for $409 each, regularly $590. I’d never consider paying $1200 for a pair of hydraulic shifters and calipers. It’s just nuts.