I rode around the city of Seattle yesterday, mainly in the rain, and just checked out some of the neighborhoods.  It is pretty hilly, the roads were wet, plus there are a ton of painted lines, crosswalks, and leaves on the ground.  My broken hip was whispering, “be careful, be careful” all day.

Anyway, it was a pretty good day other than I got super cold before I got back.  One thing I noticed was there were a ton of homeless people.  I guess the climate is good enough that they can stay here all year long, because most of the ones I saw seemed like permanent fixtures.

I got thinking about this last week when I went through Venice on the way to the Mike Nosco ride.  There are a bunch of down and out people there too.  It got me thinking about what turns in a person’s life gets them to the point they’re sleeping on the sidewalk.

Some of the people are obviously mentally ill.  At least compared to general society.  So, they can’t function within the normal parameters of our society.  But others seem alright.  It seems like they just had a few unlucky breaks and next thing they knew it started spiraling out of their control.

I watched a street musician in Venice when we were eating lunch.  The guy was super good.  I wish I would have video’d some of his music.  He should have been a super star, a rich artist.  Maybe he was and was just out on the street doing what he enjoyed?   I don’t know.  All I know is that it seemed out of place for a guy that good to be sitting on a step and playing for a few bucks.

But that is the way of life.  People that have the same talent sometimes have vastly different lives.  I know it’s the way of music and acting.  It is sometimes that way in sports.

I’ve run into quite a few cyclists throughout my lifetime that are super talented and possess nearly all the goods to ride at the Pro Tour level.  They just never had the contacts, or maybe just the luck, to get the opportunity to be seen.  So they just do the local stuff while all the guys they race against just shake their heads in disbelief.

And then, you end up sleeping on the hard, concrete sidewalk some. 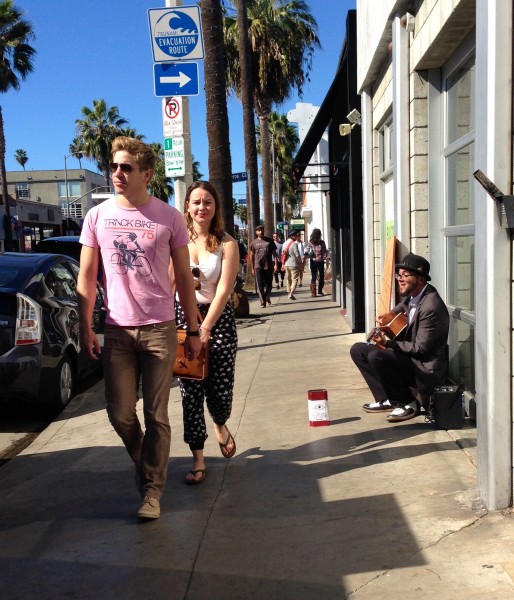 This guy was really great, singing, what seemed like, original music. Most people, like these guys, just walked by without a glance. Funny the guy is wearing a cycling t-shirt. 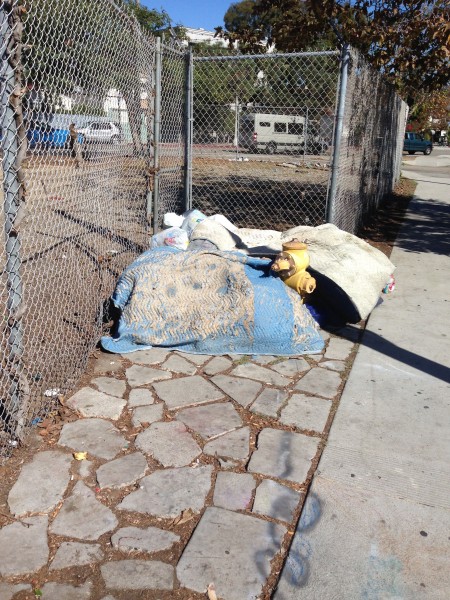 I think there were a couple people sleeping under these blankets near Venice Beach.

21 thoughts on “Talented or Lucky or Homeless?”