Thor retired and what do you know, a book is coming out.  I have no interest in either.  I wrote a post in 2010, just after he won the World Road Championships about what I thought about Thor.  It is probably just easier pasting it below.  In the book, I guess he says he didn’t know anything about drug usage in the sport before 2011.  I don’t believe that a rider can be as successful as he was and be stupid, so he must just be a liar.   There really isn’t any other option to his statements and observations.

When Lance said to Thor that he and everyone else used drugs, Thor though, I presume to himself –
“I wanted to tell him that he was wrong. That it wasn’t at all correct that everyone doped themselves. That I didn’t do it. I should have said that I myself was clean, that I never used dope and would never do it. Because I think Lance believed that I drugged myself too.”

Maybe Thor’s vocal cords just wouldn’t work at the time or maybe he’s just a shy guy.  I am really not sure what stopped him from just saying the statement above?

Anyway, I won’t read the book and don’t really have anything much else to say about it.

I was pretty glad to see Thor Hushovd win the World Championships. But, now, after this statement, I’m less enthused. Condensed, the statement says that he has never seen drugs in the sport of cycling and that they wouldn’t help him anyway.

That is the statement of a very, very naive person. Or a very stupid person. Or a flat out liar. One of those three explain it. I have a hard time believing it could be one of the first two. A guy that gets the results that he does can’t be dumb or naive. I don’t know him, but I’ve heard he is a likable guy, so it is hard for me to call him a liar. I hate problems with answers that can’t be reasoned.

I’m not sure why the current World Road Race Champion would give an interview and say what he did. It is impossible to be at his level in the sport and not understand the situation with drugs. And to say that it wouldn’t help him since he is a “sprinter”. That is just idiotic. The only thing I can think is that it was taken out of context and that the writer screwed it up somehow. Maybe that kind of explains it.

Below is an interview I did with Mountain Bike Action (MBA) back in 1998. That was 12 years ago. This was before the Festina doping scandal. It was so obvious then, without the all the media attention.

You have to click on the pages to make them readable. 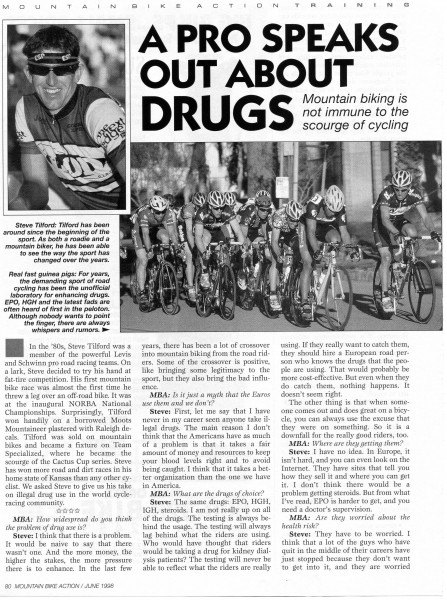 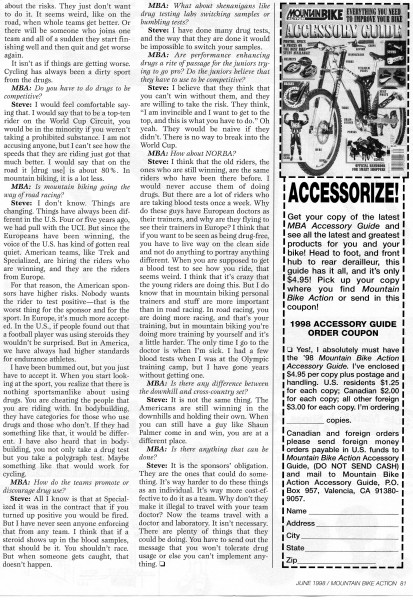