I’ve considered cycling a pretty hard man’s sport. The sport in general, all aspects. Road, cross, MTB, even track. But when officials make spur of the moment decisions that detract from that description, it pisses me off.

Stopping the race 10 km from the finish yesterday was a really bad call. Horrible. No matter what you think about what happened, it changed the outcome of the overall race and you can’t take that back. They, the officials, have no ability to “correct” the results because they made a really bad call previously.

First, let’s first address the situation. They were running a road race, in Colorado, on a dirt/gravel road climb and descent. And they were having the race finish mid afternoon. The chances of an afternoon thunderstorm are really high, like sort of guaranteed. So, there shouldn’t have been any surprise when it happened. Even if the weather conditions might of dictated a race stoppage, which I don’t think existed, the race obviously didn’t have the infrastructure to insure the safety of the riders with an neutralization. They couldn’t get the race neutralized until the riders had descended the dirt/mud and were on the pavement.

2nd, when do we start stopping bike races that are scheduled to be held on dirt, because of rain? I understand lightening, but by the time the race was held up, there wasn’t any. All the neutralization did was screw up the results majorly.

Our sport is dangerous. That is an accepted aspect of the sport. I’m not sure if the officials at the Pro Challenge have been watching too much Tour de France TV, where the riders themselves neutralize the race because of “wet descents”, or Giro TV, where the officials screw up the call and try to neutralize a wet descent and change the results of that race, but for whatever reason, they think that they have an official obligation to insure the safety of the riders, which they do, but not in this instance.

There have been so many road races held all over the world, for over a century, on wet, dirt roads, it’s really an insult to us, as cyclists, that the UCI officials think that we can’t handle those conditions. How about every Tour de France before they paved the climbs? How about the UCI, Battenkill, that is famous for being held on many dirt climbs. In 2010, I raced Battenkill and it down poured nearly the whole 200km. I don’t think anyone there, riders, officials, promoter, remotely considered calling the race. It was epic and that is sometimes what cycling is all about.

How do you think the 1988 Giro turns out if the officials decided to call that race? Think the conditions that day were worse than a little mud in Colorado yesterday? By like 1000 X’s. Check the pictures below, or read a recap of the race here. That race went down in history as epic. It’s a stage that riders dream of racing/winning. It decided the overall classification at the Giro, as it should have.

Of course the radio thing comes back into play. Riders saying that they need radios to make racing safer. Maybe they need to give better radios to the 100’s of cars drivers and motorcyles out on the course so they can adequately inform the riders of race situations and dangers. Obviously, yesterday they didn’t have that ability.

There was a fair amount of displeasure from the lead group upon the stoppage yesterday. I heard, “This is bullshit, absolute bullshit! Get your shit together!” That is pretty mild compared to what I would have been thinking if I’d been forced to stand there. BMC’s Brent Boowalter tweeted – “Again our livelihood & hard work affected by incompetence of officials. Chief comm should be sent home NOW…”

I think the only upside for the call was that Hincapie Sportswear Development Team rider Robin Carpenter won. He wouldn’t have made it to the finish line first if the debacle wouldn’t have occurred. But, I was happy to seen him get rewarded for aggressive riding. That small upside doesn’t make up for all the problems this horrible decision caused.

Yesterday wasn’t an epic day. It was a dry, 90 something mile road race, with 20 something minutes of rain, that caused some road spray. Our sport isn’t an objective sport. Normally, the officials don’t dicate the flow. More and more now, it seems, the officials overstep their boundaries and make the racing pointless. 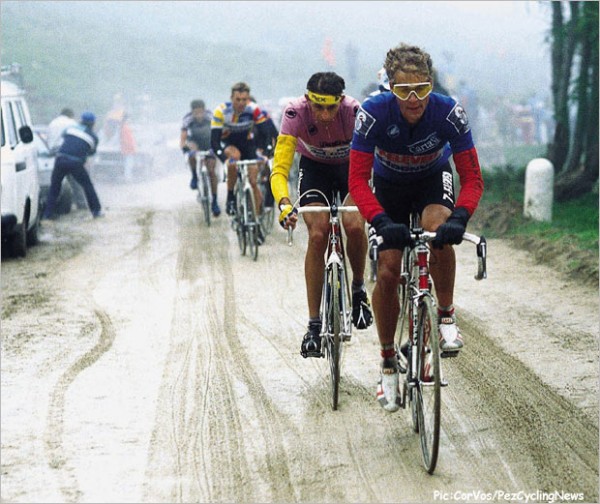 Andy starting the climb early. Think these conditions are worse than yesterday’s in Colorado? 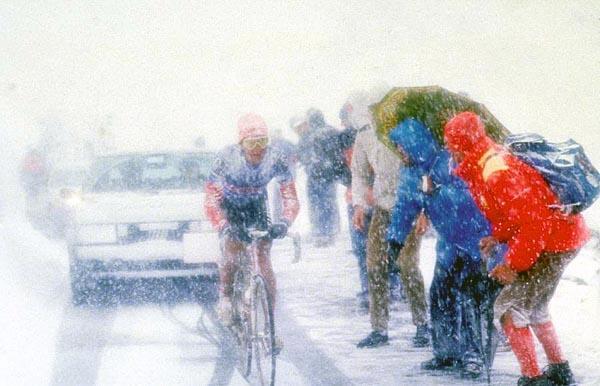 How about now? They didn’t call that race.