I woke up yesterday with a super bad neck kink? I’ve sort of have had a neck issue for a long time now. Cycling forever makes for poor posture and most long time cyclist have on and off issues, but, this is different.

My neck issue started back in the late 90’s when I ran into a low hanging branch on a descent in a mountain bike race in Hawaii. It was the World Cup Finals and I was just cresting the top of a steep hill, which then descended into the “jungle”. Right then, a freak, isolated rain storm started and it was a deluge. I stayed on my bike, the two guys in front of me fell and slid down, something like out of the movie Romancing the Stone, where Michael Douglas and Kathleen Turner slid down a muddy trail through the jungle. Anyway, I stayed upright, but about 30 meters down there was a tree branch, wrapped in ribbon. I didn’t see it, even though I’d already done a few laps of the race, I guess I was more intent on staying upright. I hit the branch head-on, helmet first, and just stopped, wedged upright. I felt my neck compress and crunch, I swore I broke it.

When I finished, I couldn’t move it. It got better after a few days, but has never been the same. I went to a Neurologist after a few months and he did a MRI and said it was good, no structural damage, but it didn’t, and still doesn’t, feel right.

Anyway, now the symptoms are that after riding for a long time, 4 hours plus, I get a shooting pain up the left side of my neck. I can reach back there and there is a tendon or something, that moves under my finger like a guitar string. It is attached to a vertebrae. I can usually alleviate the sharp pain by just digging my finger in there real deep and pushing on it. But, it comes back after a few minutes.

But, yesterday was different. I’m not sure if I slept on it wrong or what. It didn’t feel bad at all when I woke up, but mid morning, I couldn’t move my neck. It is so sore I can’t look at all to the left. I’m scared to even try, the pain is so sharp and severe.

I’m thinking it has something to do with my shoulders. Before I broke my hip a couple months ago, I had the neck thing pretty much under control. I was doing a lot of shoulder stretching and chest stretching, trying to not be so hunched over. It was working. I was riding 6 hour rides with no pain what so ever. But, that was then.

I rode to Vail yesterday and it pretty much hurt the whole time. I took a bunch of ibuprofen last night and this morning, but it doesn’t seem to help. Plus, my stomach hates that stuff. I guess I’ll just wait and see if it gets better. It makes riding pretty not enjoyable.

It’s supposed to rain here in the next two hours, and there is nothing like getting stuck in a cold, mountain storm to stiffen it up even more, so I’d better get going. If anyone out there has any do-it-yourself, fix-it solutions for this, let me know. 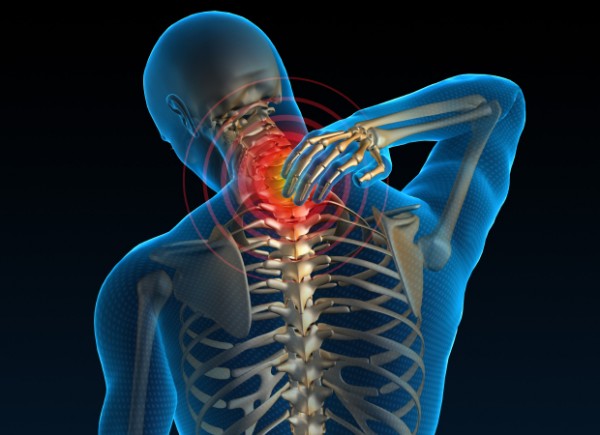