Jimmy “Mac” McIlvain has left Mountain Bike Action after serving as its Editor for an unprecedented 13 years. Mac and I go back a long way and he asked if I was interested in doing an exclusive interview about his departure. I said yes, even though it’s the first interview I’ve ever done. Anyway, it’s kind of no nonsense and pretty much focuses on his reason for leaving a job he loved. Here it is.

Steve: So Mac, you feel like it is the right time to move on?
J.M.: Well, no, not at all (laughter). Being Editor of Mountain Bike Action was an awesome job. I worked for Roland Hinz, the publisher, a little over 20 years and while a tough boss, he always treated me fairly and was very generous. He was really hands-off for the most part. I hated leaving that job. I am going to miss it, big time.

Steve: Then why would you quit? (More laughter)
J.M.: It all comes down to Mr. Hinz’ feeling that electric powered mountain bikes are a growing segment of mountain biking and they should be reviewed and featured in Mountain Bike Action. I spent 13 years building trust with my readership and I couldn’t betray that trust.

Steve: How would you be betraying the readers?
J.M.: I feel E-bike companies want riders to believe there is some gray area when it comes to usage of their products. There is no gray area. It is black and white. E-bikes are classified as motorized vehicles by every land management agency I have ever met with and are not welcome on multi-user trails. If there is a trail network somewhere that allows them, great, but that place is the exception, not the rule. How would you feel if you bought a $5000 electric mountain bike based on a review in Mountain Bike Action only to find out the first time you took it “mountain biking” that you are asked to leave or fined? These things are very fancy commuter bikes or really bad dirt bikes, but they are not mountain bikes.

Steve: I saw on the Bicycle Retailer website, Pedego Electric Bikes called you close-minded and suffering from a superiority complex.
J.M.: I didn’t see that, but it is very common for a company who feels threatened to turn the discussion into a personal attack. They hope riders lose sight of the real issue.

Steve: And what’s the real issue?
J.M.: That electric powered mountain bikes are, under today’s laws, not permitted or welcome on multi-user trails. According to the California Highway Patrol, these things aren’t even allowed on paved bike paths. They are only allowed in bike lanes. Electric bike companies have talked about banding together and getting the laws changed, but if you are buying an e-bike today, you have to deal with today’s laws. That’s not being close-minded. That is being realistic. I’m sure if I had a warehouse full of these contraptions, I’d be looking to put a positive spin on them too.

Steve: You’re calling them contraptions?
J.M.: That sounds harsh, but look at what these companies are pushing on unsuspecting riders. E-bikes are equipped with components that are not tested or approved for motorized use. It usually says as much within the first two paragraphs of any suspension fork owner’s manual. They are putting single-crown forks with tapered aluminum steer tubes on these bikes. That is just crazy. Isn’t anyone interested in rider safety? I guess these e-bike companies buy components through distributors. I can’t believe companies like Fox or RockShox would sell to them directly. I see it as a giant liability issue.
Electric Bike Action did a revealing story in their June issue where they pitted Pro rider Neil Shirley against a friend of mine, Pat Carrigan. Pat is a solid Sport-class rider. Neil is super human. The course was a 3.8-mile dirt road with some climbing. Neil was on a Pivot cyclocross bike and Pat was on an electric-assisted Easy Motion Neo Jumper. Neil blazed up the road and set the fastest time ever recorded by a cyclist. Pat still blew him away. It wasn’t even close. The magazine’s editor told me that they had to stage the photos because Neil couldn’t keep Pat in sight. More telling, Pat’s time was half that of his normal time on a human powered bike. He doubled the speed he could get up that road.
E-bike companies have said to me the additional weight of their motors shouldn’t make a difference to the durability and safety of mountain bike components. The only reason these bikes are coming in at “only” 50 pounds is that they’ve got a bunch of lightweight trail bike components on them. I’m saying there is a lot more going on here than just adding weight when a Sport rider can bury a professional. You have increased weight and increased velocity.
I’m not against electric powered bicycles. I just think riders should be aware of what they are getting into. I do not understand how they can be called mountain bikes.
Richard Cunningham, who was Editor of Mountain Bike Action when it set the record for the biggest issue ever and is now at http://www.pinkbike.com, wrote a great editorial about e-bikes that deals with their impact on trail users. I could not have said it better. (Here is that link.)

Steve: So what’s next, Mac?
J.M.: Leaving a company that has been my home for over 20 years is really scary and exciting at the same time. I’m going to load up Big Red and do a little road tripping to the Pacific Northwest with Gail [Jimmy’s wife] and Jake [their dog]. When I get back, I’ll get serious. Still, every time I get on my bike, I come up with 25 ideas of what I want to do next and about half of them are good ones. I’m fired up. 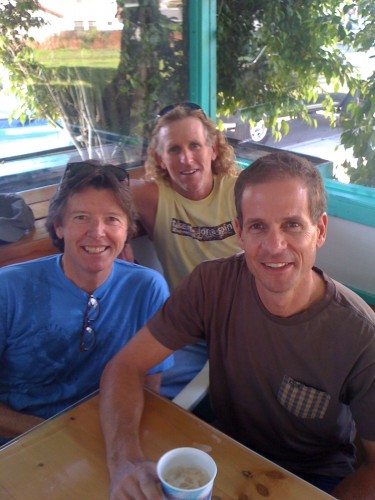 Jimmy Mac, me and Andy Hampsten. I’ve used this photo a few times, but it is one of my favorites. 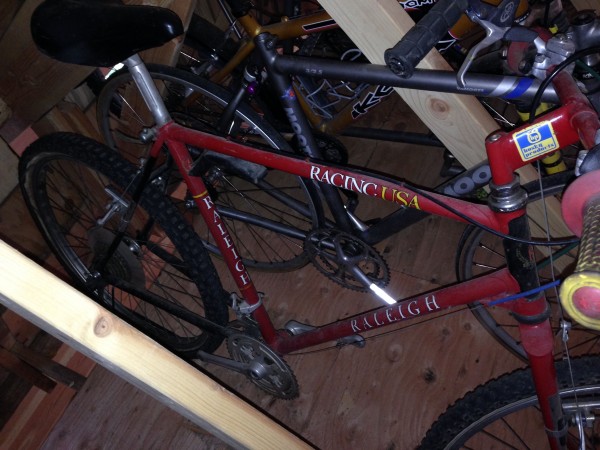 I took this picture a couple days ago at Kent Eriksen‘s. This is the original bike that Roy Knickman rode at the 1st MTB National Championships. It went from Roy, who raced it (flatted, then finished on a rim), then Jimmy Mac kept it. It still has Mac’s Husqvarna sticker (he worked there then), on the stem. I once rode it from Cardiff to La Jolla, on the beach, and in the surf. That bummed Mac out immensely, which I completely understand. Anyway, it is a classic and it was so nice for Mac to get it back to Kent.