Yesterday was a weird day. First, my van started driving like shit. It has 360,000 miles on it, but I’ve kept it in pretty good shape. Plus, it is diesel. But yesterday, when I started it, I think the EGR valve is stuck and it would barely get up to speed. I’m going to mess with it today and see if I can fix it some.

I decided it was about time to try to ride again. I hadn’t ridden in two days and my hip was feeling alright, so I decided to go out and do the 6 o’clock club ride. They were riding out to the start of the Kansas State Games Time Trial, in Auburn, which is a 30 mile ride. I started out and pretty instantly, my rear tire was flat. So, I turned around and went back to the house to fix it. It is tubeless and there was latex spraying out the sidewall, so I just took a small amount of the bead off, used some brake clean to get the latex off the rubber and patched the tire. It took a total of maybe 4 minutes.

So, I was behind. I didn’t mind because I didn’t have any idea what speed I was going to be able to ride. Especially uphill. I didn’t feel that bad. It was headwind heading south and I was riding alright. The transitions between sitting and standing is pretty painful, but I’m not going with pain now. I’m just doing it. I am 7 weeks out and the bone is supposed to be pretty healed at 8 weeks, so that is close enough.

I was maybe only 20 minutes from my house and all of a sudden, it felt like someone grabbed my hair. It was so strange. I whipped my neck around and saw nothing. I stopped and looked around. The only thing I saw was a bird up on a wire. He seemed too far away to be the culprit, but there wasn’t another explanation. So, I turned around to see the bird. All of a sudden the bird took off and dived bombed me again, grabbing at my head, then back to the telephone wire.

I took out my phone and put it on camera, to try to get a picture of the bird. It looked sort of like a owl, at least it had an owl’s face, but it didn’t have owl ears. The rest of the bird was sort of gray/blue. The beak was definitely hooked like a Predatorial bird. Anyway, I rode back and forth three or four more times and each time, when I least expected it, the bird would dive and grab at me. I took some burst pictures on my camera, but never got a great one of the bird right there. The bird was very mean. Like scary mean.

I eventually, after about 10 minutes, thought I should get going. It was super interesting playing with the bird, but I wanted to get to the time trial before it was all done.

I rode out there and it was finished. The official said something about me not wearing a helmet. I told him the bird story and it never would have happened if I were wearing a helmet. See, there are some other upsides of going helmet-less, attracting birds to attack you.

Steve Watke, a local that does the club rides, won the race. I didn’t feel like hanging out there much, so left pretty quick. Bill, who’d met at my house, rode back with me. By the time I was half way back, my leg was pretty done. Actually, I was done. I was finally able to go hard enough to be winded. And I was, winded. Climbing was a challenge. My weighted wattage was 219, so it wasn’t that bad.It is amazing how quickly any type of form leaves when I takes so long to attain.

It did feel pretty great getting on a road bike. So much quicker and lighter than my MTB bike. I couldn’t have leaned over enough before, so it was the right time to switch over. I’m happy to feel the wind again.

My legs were wasted, so I used a new foam roller that just showed up in the mail when I got home. It is from Christian Hon, he invented it. It’s called a Muscle Knead and it worked super well on my IT band. It has handles so I didn’t have to roll on the floor on it. Plus it had different surfaces, so I could pick how aggressive I wanted to be. I rarely get surprises in the mail and this was a good one. Here’s a link to their website.

I’m going to try to ride again today on the road. I woke up this morning pretty sore, but I have pretty much for the last 7 weeks, so that is nothing new. I was more cycling sore though, which is a good thing. It’s gonna be baby steps for a while. 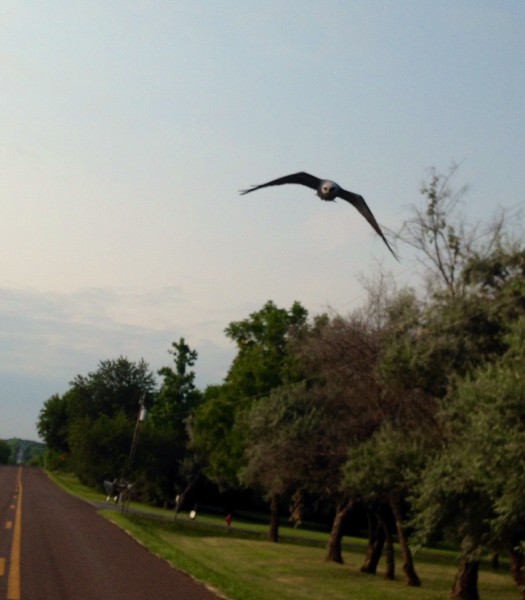 The bird attacking me. 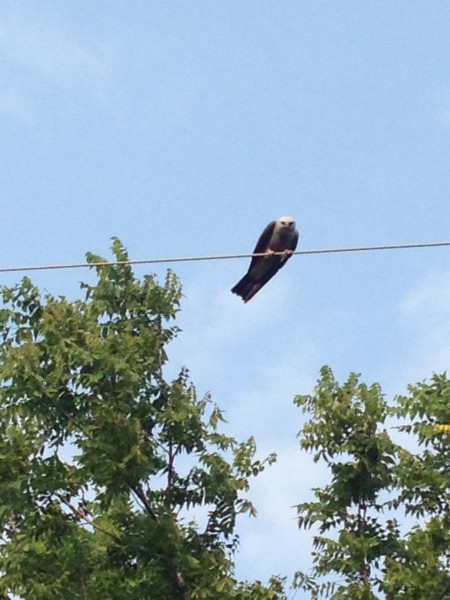 Best photo I got of it. You can click to enlarge. Any idea what kind? 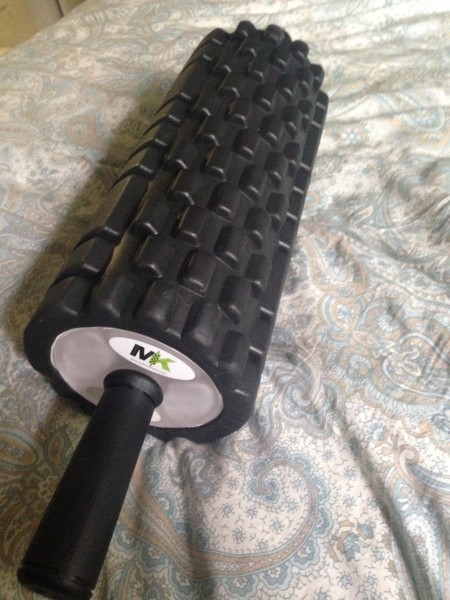 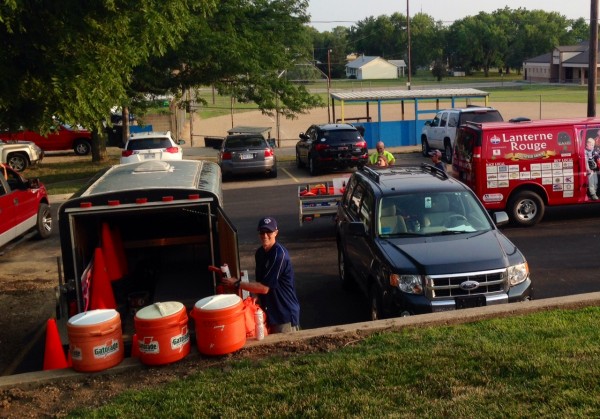 Jeff Unruh, the promoter of all Kansas State Games Cycling events in Kansas, doing his thing.

18 thoughts on “Strange Day – First Day on a Road Bike”