I’m watching NBC Sports and they just did a segment on the course reconnaissance by the Giant Shimano team. I found this somewhat ridiculous. Two guys in a car are driving around with their windows rolled up and are marking dangers on the map. Plus, they are trying to figure out where the wind is coming from, to relay it to the riders. This is crazy.

Let me tell you, if you’re a good enough rider to be racing the Tour de France, you should be able to figure out where the wind is from. There isn’t anything wrong with a team director telling their riders that there is a turn coming up, but riders need to be aware of where the wind is at all time.

Earlier, they did an interview with Tejay Van Garderen, and most of the questioning was about how he was handling the stress of the race and if he was feeling a little more settled in now. Let me tell you, having a radio in your ear with a team director telling you every crack in the road, every round about and where to be when adds a ton of stress.

I remember riding the Redlands Classic a long time ago and John Lieswyn was talking into his mic. He was saying something like, “Guys, be careful on this corner up ahead. There was sand in it last year.” I rode up to one of his team mates and asked him how he could stand the constant dribble during the race. He just pulled his ear piece out and said something like, this is how he normally has it.

Obviously, the Tour de France has gotten more and more dangerous recently. There are lots of reasons that this has happened. But, the riders and the teams themselves have to take a ton of the blame. The current riding style of the teams has made the race amazingly stressful, thus way more dangerous. Team directors mandating that at least half of their team ride at the front of the field, “protecting” their GC leader has caused most of the problems that are happening.

There is only enough room on the road for an X amount of riders. Not X + 1. And the current riding tactic nearly all of the teams is there wouldn’t be enough room if they were riding each stage on an interstate highway.

On these flat days, there have been tons and tons of crashing. Some of it is because the roads have been wet. But mostly it is because of way too many riders trying to hold the same position. Riders fighting for position when, historically, it hasn’t been important. The team directors have come up with this insane idea that having a all your riders at the front, it is safer. Obviously, that isn’t true, since team GC guys like Tejay have already fallen more than once already. The stressful race from the second you clip in at the start of the stage, day after day, for 3 weeks, has gotten us to this point, of where day after day, nearly everyone is at risk of crashing. It is just stupid.

The GC rider’s team fighting the sprinter’s teams for position. Right now, Sky is fighting Cannondale for the front. Sky, fighting for Ritchie Porte, now that Froome is gone. Wow, why? Cannondale is willing to pull to the finish, but they have to “fight” for the front with teams that have no intention of racing for the stage win.

This isn’t even addressing riders fighting for their team mates wheels. These guys riding in formation in the middle of the field is just absolutely stupid. It just doesn’t work at all. Jonathan Vaughters was being interviewed yesterday and he was saying something like his guys were doing a great job of riding together in the peleton, so it should be expected that they fall together. And the upside to that is what?

When I flew out to Colorado last year to observe the Garmin’s testing of Danielson and Vande Velde, all those guys could talk about was how afraid they were of crashing in two weeks at the Tour. Anywhere, at any time. Obviously, their concerns were real, since last year wasn’t much safer than this year.

I’m not sure how this all occurred. But, it isn’t working. Having CG riders, like Froome, crash out of the race on flat stages before the mountains, is not good for the sport. Too many guys not racing because they’re hurt. It just shows that this tactic isn’t working. 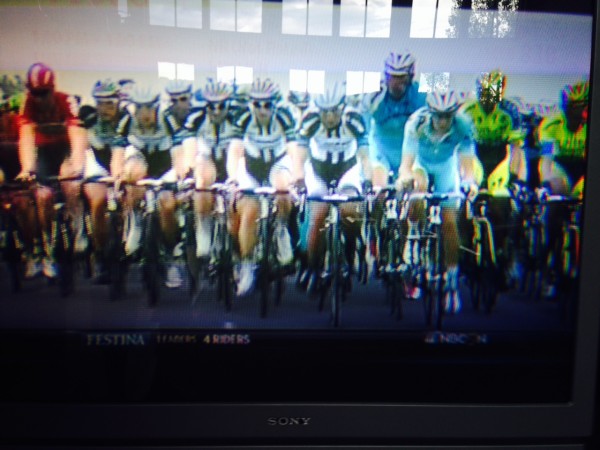 This is a photo from yesterday’s stage, when they got into the side wind. How many individual riders need to be pulling at the front of a bike race? Obviously more than you’d think.