I got up early yesterday morning and flew back to Kansas from San Diego. Trudi got back late the night before from the Road National Championships in Madison and had a flight yesterday afternoon back to Northern California to get ready for Bend.

So, we had about an hour overlap at the airport to say hi.

One upside to being on crutches when flying is that I got to pre-board with the other slow, gimpy passengers. On Southwest that means a choice of the best seating since there aren’t any assigned seats. So, I got the best seat on the plane, in my opinion, just behind the exit row, with no seat in front.

I also got pre TSA approval on both the flight out and the return. I’m wondering how they pick that. It saves the shoe removal, leaving your laptop in your bag, etc. It seems much less intrusive, plus much faster.

I finally got into the ocean on Sunday. I went pool swimming the two days before that. My right shoulder is super sore from using crutches. I had rotator cuff surgery on it last year and it never really got back to what it was. But, walking around on crutches, or using a walking stick or cane, is not good.

Swimming went pretty well. It seemed like both shoulders got about the same amount of work and felt evenly tired. The first day I only swam a kilometer. The 2nd, closer to a mile. I can only swim about 400 meters before my arms, mainly my shoulders, are so weak I need to rest. I haven’t swam forever.

I started swimming underwater towards the end. I was doing 25 yards underwater, on the minute. I can’t really kick with the broken hip, so it is sort of slow going. It takes around 35 seconds to get across, so I had 25 seconds to rest. I probably did it 15 times or so. I finally did a couple lengths of the pool, which was 50 yards. It took a few one lap efforts, to get used to holding my breath for that long. I used to be able to do 100 yards, 4 lengths of a 25 yard pool, but that seems really long now.

Swimming in the ocean was a little scary. The waves were breaking pretty big and I was worried about getting through the beach break, both going out and coming back in. It worked out fine. I forgot how salty the water is. Plus, how buoyant a person is in salt water. It was really warm, somewhere in the 70’s I think. I wish I could have bodysurfed. Next time.

I’m only in Topeka for a night I think. I’m heading out to Colorado through the weekend. My friend Stacie rented a house in Vail for 10 days. Plus, my team mates, Bill Stolte and Brian Jensen are riding the Leadville 100 qualifier in Leadville on Saturday. Bill is already in Vail. I’m not sure where Brian is. He’s already in Leadville and is staying in Colorado most of July to acclimate. He finished 12th last year and it was his 2nd mountain bike race ever, I think. He should improve this year. I’d like to think that I might be able to ride with him sometime the next month or so, but it has been pretty slow going this last week, so I don’t have any preconceived thoughts on my recovery rate just now.

I didn’t see the Tour today yesterday. After Cavendish crashed and is out, all that the commentators where talking about, before the stage, was whether cycling is a contact sport. Christian Vande Velde said it is for sure. He said there was contact going on during the neutral zone, riders trying to move up because of the roads being so narrow and twisty.

I’ve raced the British Milk Race twice, on those very roads, and never thought much about it being that dangerous. But, the fields I was in were closer to 100 riders than 200, so that makes a difference. But, I don’t really see how leaning and contact would make it any safer.

I guess I have to believe what Christian is saying. And if, or since, it is true, then someone needs to address the issue. As I’ve written before, it offers nothing to our sport and is only going to ultimately lead to less participation. And cycling is a participatory sport here in the United States.

I did ride my bike yesterday. About 9:30 last night, I took Bromont around the block and then rode over to a friend, Ian’s house, to give him some tire glue. He’s heading out to Colorado Springs to help his wife, Caitlin, do some track racing Friday and Saturday. My leg felt pretty good really. It was a joy getting out on my bike. I stayed a little late and got stuck riding back in a thunderstorm. The wind supposedly blew 60 mph, but it didn’t seem that hard, maybe 40. I was creeping through wet corners, worried about falling on my hip. I got thoroughly soaked.

Okay, I need to get back to watching the Tour. It’s a love/hate relationship. 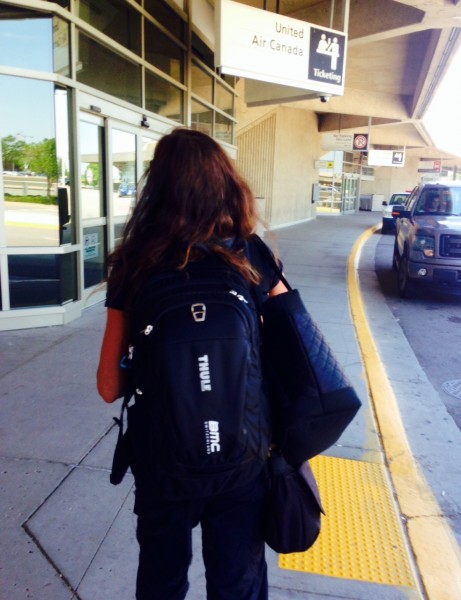 Trudi heading into the airport as I was heading out. 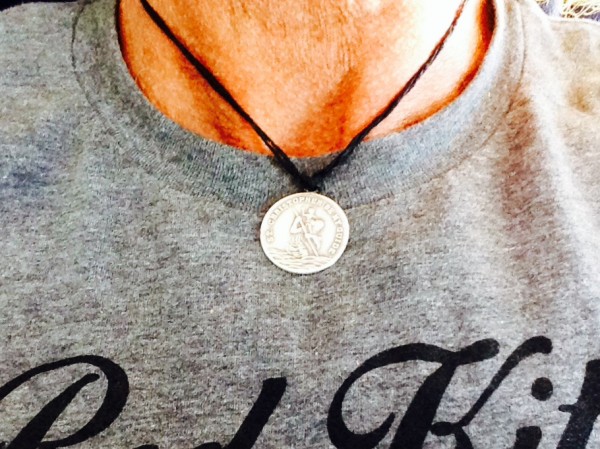 When I had surgery, they had to cut off my St. Christopher medal. There were a lot jewelers at the La Jolla Farmer’s Market on Sunday, and it’s back to where it belongs. 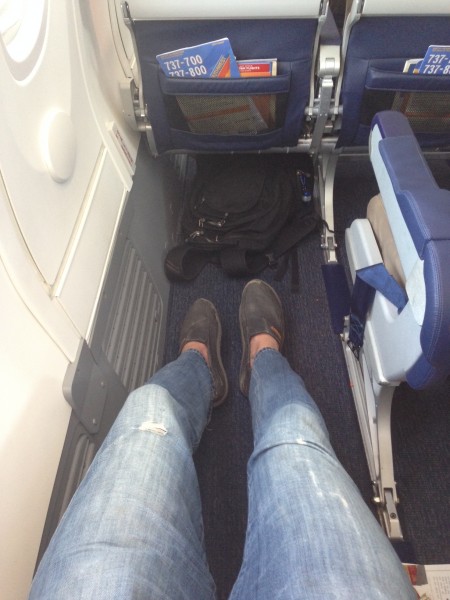 Plenty of legroom on the flight. 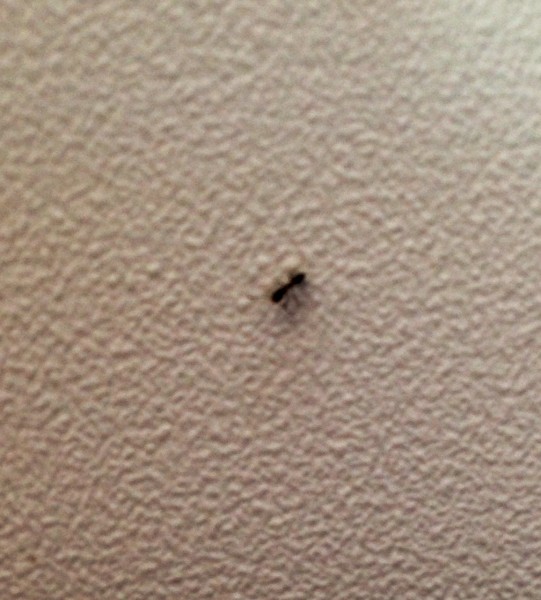 This ant was crawling around the plane. I wonder where it started and if it will ever see its home again. Maybe the plane is its home.

8 thoughts on “On The Move”