Okay, this is getting old, but it’s what I have on my mind today, so it’s what is going to be posted here. This intentional contact bike racing is complete and utter bullshit. It happens constantly and is getting more aggressive by the race.

It’s not like it is only happening in the Tour and the Giro. There is a trickle down effect. When riders like Chad Hartley and Travis McCabe leave comments here that it is okay and part of the sport, then it is in my backyard. I’m doing this for self-preservation. I have enough trouble staying upright on my bicycle sometimes. Guys pushing and leaning into me doesn’t help the cause.

Let’s go to the Tour finish yesterday. Obviously, by watching the finish, and by the statements by Mark Cavendish, there is no dispute what happened. Cavendish attempted to create a hole where there wasn’t one. This “tactic” works, a certain percentage of the time. But it doesn’t work, a lot of the time. And if it doesn’t work for the pros, then you can imagine how it doesn’t work for amateurs. But when the pros do it, then it is emulated by everyone else. (It’s sort of like riding with your forearms on the bars in the time trial position. It’s really a stupid way to race a bike, but since Fabian does it, then everyone needs to have it in their quiver.)

Let’s go to Mark’s own description of what happened yesterday. On the Omega Team website, Mark states-

“Simon and I came up, and I think two of us wanted Peter Sagan’s wheel. The others moved to the left. I wanted to go but Gerrans was there. I used my head to try to take us across the road. Gerrans wasn’t budging, I wasn’t budging, we crossed bars and we both went down. At the end of the race, in different circumstances, I would have hit the brakes and not tried to go for the win. The stage had been lost. I wanted it that bad and I tried to find a gap that wasn’t there. I spoke to Simon after the stage, I asked if he was OK, and I also spoke to him on the phone later and apologized to him. I really hope he’s OK and today’s a good stage for him. I wish him a good rest of the tour.” (Whole statement here.)

So, he used his head to try to take them across the road. I guess since he didn’t take his hands off the bars, that is supposed to be kosher??? The officials and the UCI doesn’t seem to be interested in controlling this. The only reason I can come up with for that is there is a certain entertainment value of crashes at the end of races. Or crashing in general. And for sure, our sport, especially the Tour, Giro and Classics, the televised events, are being molded by the entertainment value. And a big part of that is the crashes. As a rider, I find this disgusting.

Where is the relegation? Where are the fines? Mark apologizes to Simon and it is all good. It was super lucky that only one other rider fell in the incident. Anyone mention his name? Anyone know his name? Maybe he was set up perfectly and it was going to be the defining moment of his bicycle racing career. No one seems to care about the other riders affected. There could have been 50 guys laying on the ground, with hundreds of thousands of equipment destroyed, and only the two names, Cavendish and Gerrans would be mentioned.

These riders are making enough money that there needs to be huge financial penalties imposed when this stuff happens. But, no, an apology will suffice.

In the national, regional and local events all over the world, it is the same. But there aren’t names. Just destroyed equipment and injured athletes. I really don’t think that the trade-off of good television for the pros is worth the carnage on a worldwide basis.

We, as riders, have allowed this to happen. Realistically, our sport is self policing. There isn’t an official riding around in the peleton. So, the sport, the participates, police it. And that is the problem right now. When the tactics and riding styles benefit the best teams, the best riders, even if it is bad for the whole peleton, or bad for the sport in general, it seems to be accepted. And lots and lots of what is going on in the sport right now, at the basic level of the sport, on the road, is completely asinine.

The sport is dangerous enough without allowing this stuff to happen. And, in reality, “this made for TV cycling”, Rollerball or Gladiator cycling is ultimately going to be worse because the riders are going to be hurt and not competing.

This Tour would have been more exciting having Mark Cavendish in the race, but he’s not. It’s a lose/lose situation. 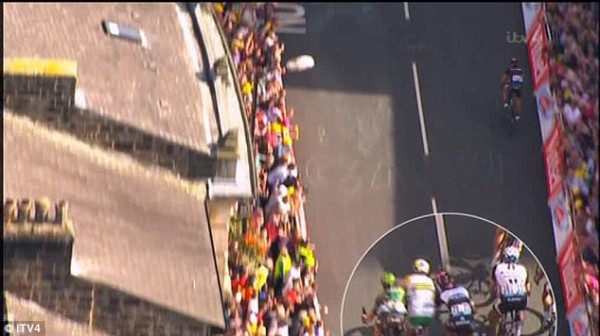 And the end result.

60 thoughts on “Beating a Dead Horse”