Yesterday, we drove up to Chicago, via Iowa City. I stopped in at the University of Iowa hospital to see my surgeon, Dr. Karam and couldn’t believe how crowded that place was. They have 4 parking structures at the hospital and if every other one was a crammed full of cars on #4, then there are thousands of people inside the structure. It was a fair amount of “walking” to get to the ortho clinic area.

But after I got there, man was it fast. I was at the reception desk for maybe 30 seconds. The woman handed me a ribbon of stickers with my name on it to take to the x-ray dept. I went down the hall to x-ray and there were a group of people there just standing and telling funny stories. I might have been at x-ray for 4 minutes total. Right into the room, on the table, x-ray, x-ray and out. From there I walked down to clinic B. They knew I was coming, actually a nurse had my paper work in her hand and she led me to an examination room. Dr. Karam doesn’t work there on Thursday, so they were going to page him and I was to wait. I waited about 3 minutes.

So, Dr. Karam showed me my x-ray and said that everything was good. That the bone was healing properly, etc. I really didn’t have much to ask him. I told him I’d ridden outside twice, 15 miles the day before, and he seems surprised. He said that it was fine, but I shouldn’t fall. I told him I was having a fair amount of pain in other parts of my leg. The IT band, above my knee, lower calf. He said it was from attrification and lack of use, which makes total sense.

What I didn’t like to hear was that it was going to be 2-4 months before it is “fixed”. I thought I was on a 6 week accelerated program. But, realistically, 6 weeks is in just two weeks, and I can barely walk right now, so unless something changes dramatically in the near future, I’m gonna be hobbling around for longer than I anticipated.

Dr. Karam did a triathlon the weekend after he operated on me. He sent me a picture of his bike and I told him that he needed some clipless pedals, he had toe clips. I was surprised to hear that he went to a local shop and bought some. I asked him how he sent up his cleats and he said that the guy at the shop did it for him. Man, am I so far removed from that. I couldn’t imagine someone else positioning my cleats. I gave him a short tutorial about how to properly set cleat position. I hope he does it. Just having cleats mounted by a bike shop guy, without doing a fit, could be disastrous. As an orthopedic surgeon, I assume he realizes that.

So, we were in Iowa City for hardly an hour. We started driving east and I was wiped out and fell asleep. Next thing I know, Trudi is exiting to get gas. She says we should stop at the American Pickers shop in LeClaire, Iowa, on the Mississippi. It was just a couple miles up the road.

I watch the show sometimes. Mike, one of the picker guys, used to own a bike shop in Davenport, Iowa, right where I fell and broke my hip a few weeks ago. I don’t know him, but Jeff Bradley, friend, old 7-11 rider, knows him pretty well. Plus, he drives an old VW pickup truck, which was my first car (I still own), so we have that in common.

It had rained some, but was not raining when we pulled up in front of the shop. It was nearly 6 and they closed at 6. I got out, all stiff, and did a lap of the area. There are two building, with lots of interesting stuff in it. Since Mike is a bike guy, there are lots of old bicycles, frames, etc. around. Plus a ton of old motorcycle stuff. The bike stuff wasn’t as interesting as the motorcycle stuff.

Right when we were going to leave, it started raining like crazy. And it didn’t stop for the next 30 minutes. It was nearly impossible to see out the windshield with the at full speed. I fell back asleep, and no, I’m don’t have narcolepsy​. I’ve been sleepy poorly for a while and not feeling all around so well, so I think it was just catching up with me.

Finally it dried up when we were on I-88, a toll road that heads NE to Chicago. The speed limit is now 70 in Illinois. It’s about time. We stopped at Trudi’s sister’s house, in a Southwestern suburb and ate dinner with her. Parker, Trudi’s nephew, goes to college, but works at a Performance Bike Shop in the summer. It’s his 2nd season for that. Brett, Trudi’s brother-in-law, just got a new Niner, gravel road bike for his birthday, so I had to check that out.

We left and still have 30 minutes further to Mt. Prospect, where Trudi’s mom lives. I was pretty much done and went to bed nearly immediately. I slept 9 hours, pretty much straight through, which is a post-op record for me. I feel much better today, but not stellar. I brought along my MTB bike and am planning on trying to ride an hour or so later.

Riding isn’t the challenge, it is the predicting the stops. I can’t really swing my leg over my bike and unclipping is really hard, so I need to try to predict when I’m going to have to come to a complete stop and then find a curb or something higher to lean over onto. There are lots of stops riding around the Chicago suburbs, so I’m not so sure it is going to work out all that well.

Tomorrow afternoon is Trudi’s mom’s party. I don’t think I can get down to the ITU race in Chicago. It’s not that I don’t have time, it is that I can’t really move around much. Walking is only a real option using crutches, and even with those, more than a block or so, is really a long ways. I’ll think about it some. It’s not like Pat and Gwen aren’t going to be swamped by the event and others. I got an email from Adam Bergman saying he is going to fly in to visit. It is the only ITU race in North American this year, so it is not like they are going to be around much before the season is over. Gwen is leading the series at the half way point, so that is great.

Okay, enough of this. I gathered some tools to maybe put a new roof on Trudi’s mom’s shed. I haven’t looked at it, but I think it needs to be re-sheathed too. I’m not sure how that would work exactly. It is super small, but that doesn’t really matter. I’ll see how it goes.

I’ll post a couple more photos of the x-ray, etc., when I get back to Trudi’s mom’s house. 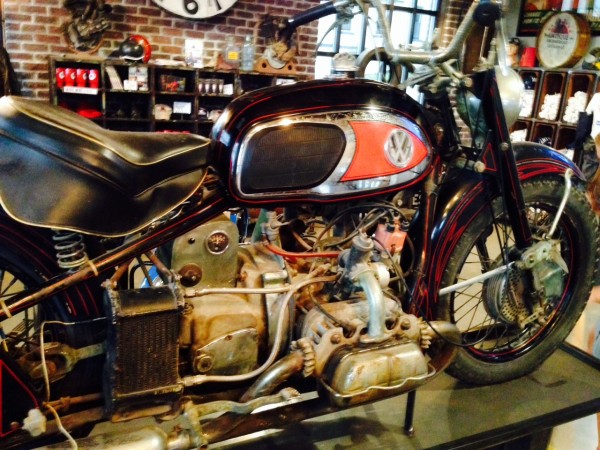 At the American Picker place, this was pretty cool, at flat VW engine mounted in a motorcycle. 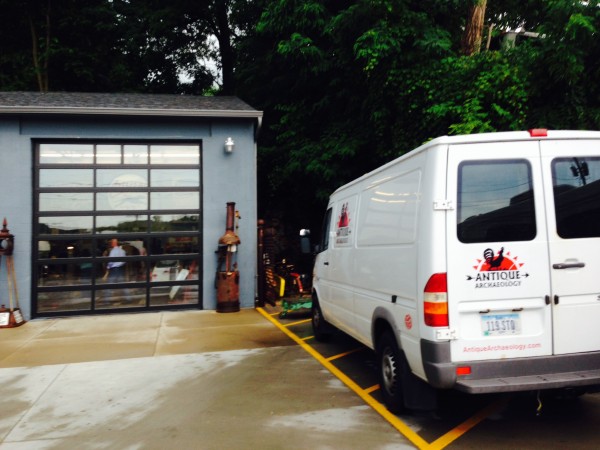 The outside and Sprinter van. 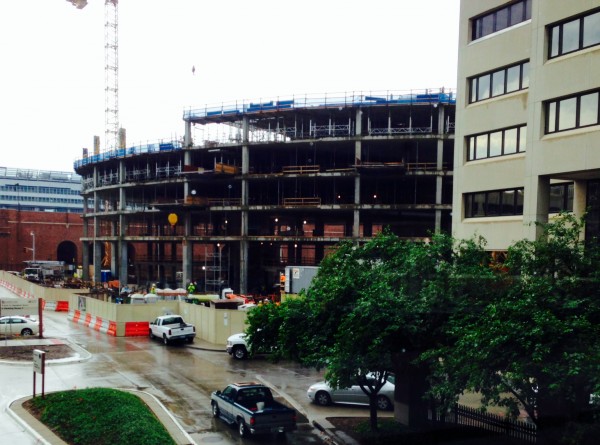 The U of Iowa hospital is huge and they are still adding on. It seems like even hospital in the country is constantly under construction. 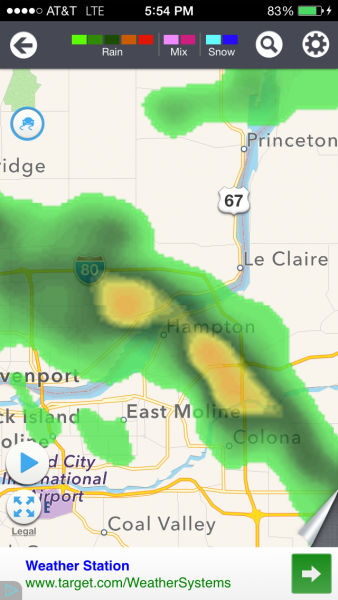 This storm system moved along with us for a while. I have had the worse luck driving this year weatherwise. 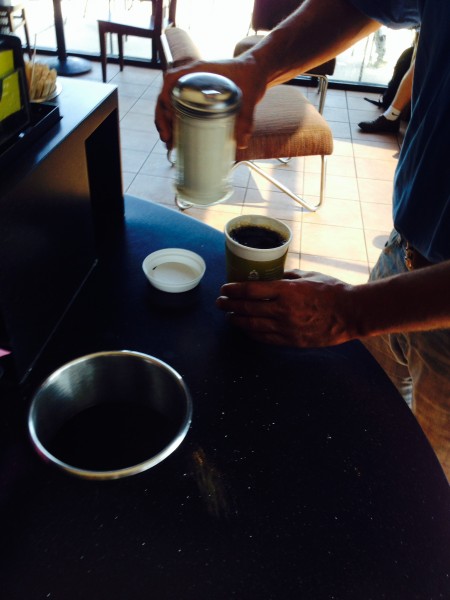 I’m doing this post at a Starbucks across the street from Trudi’s mom’s house. This guy must be from Brazil or somewhere. He asked for more sugar, after he had already put an enormous amount of sugar in his coffee. I took this photo after they had refilled the sugar container and he had let it flow into his coffee for at least 15 more seconds. Right after this, he tasted the coffee, unscrewed the top of the sugar container and dumped at least an 1/8 or a cup more into his cup. Unbelievable. 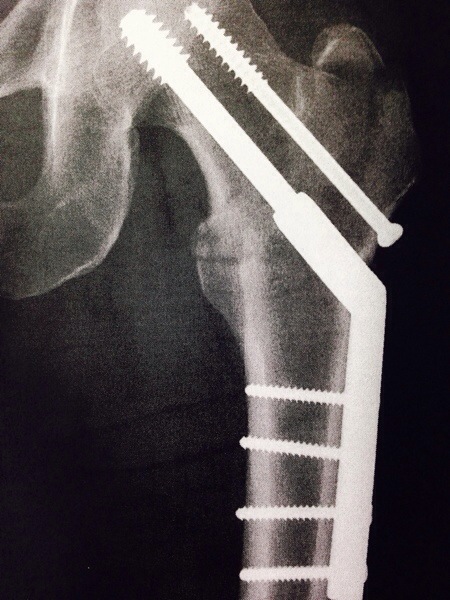 It doesn’t look so healed when I see it here.