I’ve been head butted 3 times in my life, if my memory serves me correctly. Once by Greg Henderson, who now rides for Lotto-Belisol, when doing a race on the south island of New Zealand. It was on a climb and I guess he thought I was on “his” wheel. Then next time was by Dan Schmatz during the labor day races in St. Louis. He was on John Puffer’s wheel, with 1/2 a lap to go and when the line swung and I happened to be on John’s wheel, Dan didn’t like it. Then, a month or so ago at Joe Martin, I was head butted by Travis McCabe, Smartstop, at the end of the Hogeye road race about 800 meters from the finish.

So, only 3 times, but I’ve witnessed it a ton. During nearly every NRC criterium I am in. I watched Hilton Clarke and Brad Huff lock into a head butting war at the top of the hill during the Saturday night race at Tulsa Tough a couple years ago. Actually, I’d have to say, if I think about it, Hilton Clarke seems to do more head butting than anyone I’ve personally witnessed.

Head butting is just an elevation of contact, which would usually start as elbowing. I’ve been elbowed tons of times. Then there is just pushing the hip. It is constant now and happens routinely. And nearly every time it has been in the last 10 years.

It all bugs the shit out of me. I was taught, when I started racing, that contact is something to be avoided at all times. It is pretty much the worst infraction that could occur during a race. No one would touch another rider on purpose.

I watched the video below and have a very hard time understanding how our sport has “evolved” to the point where we allow riders to take their hands off the bars and push other riders out of the way. I don’t give a shit if John Degenkolb, the Giant/Shimano star of the video, is trying to stay on his leadout train. Sorry John, but your guys weren’t taking you into account, or weren’t willing to just go out into the wind and ride, so they kept leaving you behind. You kept losing your team mate’s wheel, so you push guys out of the way to move back up? He wasn’t really hand slinging anyone, but he is definitely pushing them to get out of his way. I’m pretty sure that isn’t how it is “supposed” to work.

One of the coolest things about the sport is the movement within the pack. It is a beautiful thing. And one of the things to be admired is to watch a rider move up through the field and stay in great position for the finish. Doing it by pushing guys around takes no skill, no talent at all. Plus it is super dangerous. I have no tolerance for it.

Something has to be done about this whole “physical” sprinting. Too many guys are hitting the pavement on a daily basis. You notice that John is already all wrapped up with gauze in the video.

I don’t think that these guys understand the cause and effect of moving riders by pushing. They aren’t only pushing one guy, they really are pushing everyone on the other side of that rider. When riders stop the schooling movement of the field, then bike racing doesn’t work, thus guys fall.

This happens all the time in the finish of many races I’m in. It seems to be accepted. It shouldn’t be. I’m not exactly sure what specific rule it is breaking, but it is against the rules. But a rule isn’t a rule unless it is enforced. And no one enforces this. Renshaw was kicked out of the Tour one year for head butting, but he was so blatant about it that the officials didn’t have any other choice.

With more and more cameras in the races, I’d hope to see these actions stop. But, I don’t think so. Below the video below, inCycleTV puts the caption, “Here onbaord cameras give us a whole new dimension to the final exhilarating moments of stage 5 of the Tour de Suisse.”

I don’t think it is exhilarating. And it’s not a new dimension. It is the same new bullshit. Officials obviously aren’t addressing the problem. If riders allow this to continue, then it will continue. We need to change it. 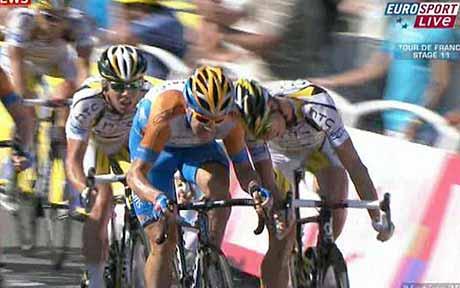 Mark Renshaw in the Tour.

59 thoughts on “Pushing & Headbutting in Races”