I’m not actually sure if I don’t bounce so well or I have less patience to deal with the hit, but whatever the reason, I seem to be struggling mentally a little more with this injury than I have historically. It is so stupid to have a preconceived idea of a time frame I should be on when it is sort of completely made up by me. But, that is the way I’ve done it over the years, so it’s hard to change it now. I’ve written a post before about this subject, racing hurt, or maybe more appropriately called getting hurt racing or recovering from injury.

When I was an intermediate, junior 13-14, I went up to Milwaukee to race Superweek. It was my first race trip out of Kansas. I did pretty well the first couple races, but fell during my 3rd race and broke my collarbone. We loaded up and went back home. I saw an orthopedic surgeon back in Kansas and he said everything looked good. I asked him if I could still race if I could stand the pain and he said he didn’t see any reason I shouldn’t. So, we loaded back up and drove back up to Milwaukee and I raced the National Championships just a few days later, with a clavical strap cinched down super tight. During the race, I was off the front with Jeff Bradley and my arms fell asleep. I crashed and Jeff went on to win the race. It was a different era of medical advise back in those days it seems.

We’ve been downloading a bunch of old cycling pictures and media to digital form the last few days. It is sort of strange seeing the photos and not thinking it was that long ago. It really wasn’t compared to a universal time frame, but compared to a human’s lifetime, it is a big percentage. I found a photo from the British Milk Race, after I’d hit a stationary car at 100 km/hr. I was pretty broken up. I remember being super disappointed not being able to finish the race, but don’t remember having this withdrawal mindset two weeks later.

That time, after returning back to the US, I went to altitude to acclimate, so when I could ride, I could train effectively at altitude because the Coor’s Classic was less than 2 months away. I had a broken collarbone, leg and hand, plus a wicked concussion. Right now, looking back it seems virtually impossible that I could get back to a resemblance of race form in that short of time, considering I needed nearly the whole time to heal up. But, I did ride the Coor’s race, pitifully at first, but came around the 2nd week and finished up alright.

I know I’m older and heal slower now and I know that I don’t really have any real need to rush anything. The season now is nearly 365 days a year now, so I can just start whenever I fell up to it. It would be nice to have a goal, a race, to have a realistic time frame for reentry.

I’ve been getting a few emails and comments here about whether it is time that I just hang it up, the sport. It didn’t even cross my mind. Cyclingnews did an article with Taylor Phinney, who broke his leg the same day as I broke my hip. I’m not injured nearly as bad as Taylor and of course, am not in the same situation in cycling as he is either, but we do have the same mindset somewhat. He says, “I’m in physiotherapy and I’m way ahead of schedule, in fact they’re forcing me to chill out,” Phinney said. “There isn’t much for me to do except for rehabilitation.”

So, I’m antsy to get moving more. I’ve been riding this handcycle the last couple days. It is way slow and much harder than riding a bicycle, but it is super nice getting out under my own power. I’m sort of surprised I’m not walking yet without crutches. It seems nearly impossible, but I am getting better. It is way easier putting my pants on and getting up and down out of a chair.

Benjamin Franklin said, “Happiness depends more on the inward disposition of mind than on outward circumstances.” It is so true, I really don’t have much to complain about. 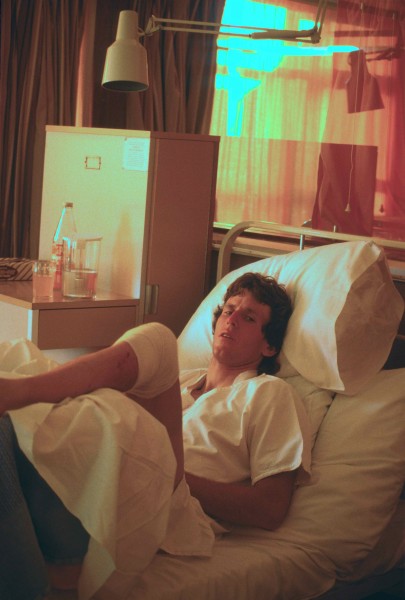 Laid up in a hospital in Whitby England after hitting the car below. 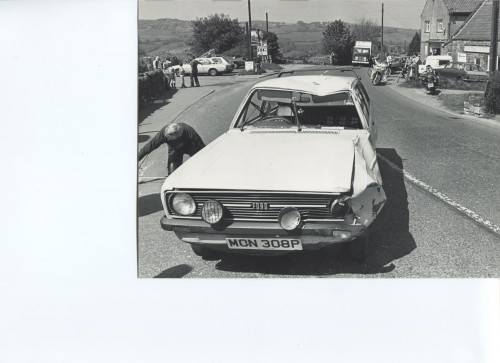 This photo was taken the morning before the two pictures above. Both Andy Paulin and I, behind me in the National Team jersey, hit the car at warp speed. 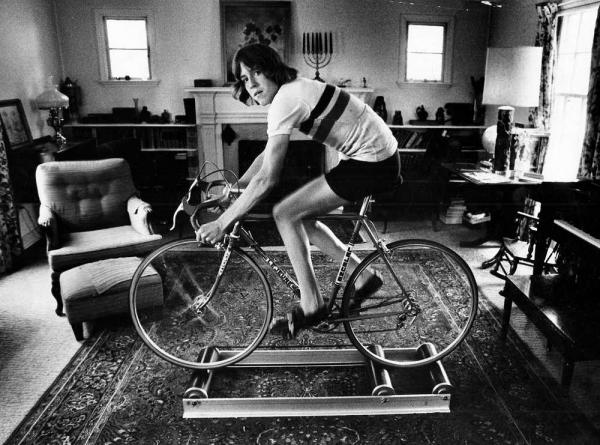 Photo from a newspaper article of me riding rollers with a broken collarbone before Nationals.