Like I wrote yesterday, I’ve sort of been just moping around, feeling pretty under the weather. It’s given me a lot of time to think, and just reaffirm, how fortunate I am that I was born into the chosen few. By that I mean, I am one of the minority of the people on this planet that has access to the luxuries, that most of the other people on the planet just dream of, or don’t even know exist.

I’d say being sick and broken has put me into a sort of funky mental frame. Either/or is okay, but both broken and sick is just down right crummy. Saying that, I would still take my situation of the last week, here, to nearly any other place on the planet for it to occur.

If I were one of the other 5 billion people that don’t have the ability to have their hips screwed back together after an accident doing an athletic event, then I would just be SOL. I’m mending up slowly. Actually, that isn’t true, I’m mending up pretty quickly, even on my scale. But, I would not be close to good if I were one of the 85% of the people on the planet that don’t have the access or the financial means to be involved with “modern” medicine.

If I were Joe Blow in many places in Africa, South American, or lots of other places on this planet, I’d just be broken and I would be left to whatever my body could do to heal itself up.

Instead, I had access to a surgeon that had done 100’s of these operations before. To modern day anesthesia, antibiotics, pain killers, etc. Now I’m sitting in an air conditioned house, laying around on my nice bed, or comfy couch and am in a gloomy state of mind because, poor me, I’m sick. I don’t mind so much being hurt, that is part of the bike racing deal, but the sickness thing is bumming me out. Man, what a wuss.

I know I’m going to feel better soon and that I’m going to improve, healthwise, quickly. It would be so easy to be in a situation where that isn’t a given.

I’ve written this before and I’ll state it again, anyone that is reading this has already won the worldwide lottery. You don’t have to wish yourself anymore luck, because you are one of the few that were born lucky. We all are so fortunate to have a phone, to call someone when we are in a bad situation. Or someone else will just dial three numbers, 911, and someone will come and help. We shouldn’t take this for granted. It is part of the deal of being blessed by the lottery of life.

So, I’m gonna try to get through these next few days without being so gloomy. I don’t have any reason to complain. If anything the opposite. 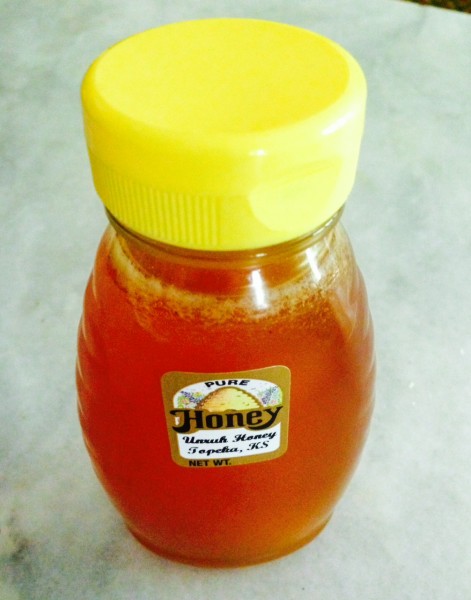 My friend, Jeff Unruh brought me over some of his home grown honey today. Couldn’t have asked for anything else.

I did manage to ride the erogometer for 20 minutes. Only have a cycling shoe on my right foot. I can’t twist my left leg at all. Plus, it is just going around, no pressure much on the upstroke or downstroke.

7 thoughts on “So Fortunate”