My physical and mental feelings were all over the map yesterday. I didn’t realize how much both were tied to painkillers until looking back upon it, retrospectively, and then seeing the correlation. It was only three days after hip surgery, so I’m not sure why I’m not just vegging for the next few days, but that doesn’t seem to be where my mind is taking me. I actually came up with this great idea of trying to “spin” the excess water out of my swollen left leg yesterday. Again, I didn’t realize until after, that it was a premature idea. At the time, it seemed sensible, but again, that is on painkillers. Trudi secretly video’d the attempt and sent it off to Stacie, who forwarded it to Dr. Karam. Busted. Well, I’m not sure, because he did imply that I could do anything that didn’t involve an enormous amount of pain.

I didn’t realize that I didn’t write a post yesterday until way late in the day. By then, I couldn’t focus enough even to just watch TV. It is truly amazing how much mobility I actually have in such a short time, but it is so easy to forget how little I have too. I’m using a walker instead of crutches now. The walker just seems much more sturdy. I’m okay on the crutches, but sometimes I get a little off balance and have to reconnoiter before moving on.

I have permission by my doctor to put as much pressure on my leg as I can stand. I thought, great, I’ll be walking really quickly. That ain’t happening. At least if the healing curve stays the same as it has. I’m assuming it will be better quickly. There is so much swelling, like 2 gallons of liquid, 16 lbs, swelling, that it is very hard using the leg at all. The joints are all puffy and it is just difficult to bend anything. I know that I retained a ton of water thru IV’s in the hospital, but I thought that would leave way quicker than it has.

Sleeping is hit or miss. Mainly miss right now. I’ve been sleeping pretty good from maybe 10 pm to 3 or 4 am. Then I’m done with that. Seems like 5 or 6 hours is enough, especially compared to sleeping an hour at a time in the hospital. I do nod off multiple times during the day, like dozens, so I am probably sleeping more than I’m awake really.

Okay, I’m just rambling here. There really isn’t much to report other than it is already old. And I’m impatient. It is very hard for me to believe it is Saturday already. I crashed on Monday, so it has been the better part of a week already. That is nuts.

Today is the Dirty Kanza, a 200 mile gravel race. I think there are 1300 riders. The race actually starts in less than an hour. I sealed up some extra wheels yesterday for Brian. It was supposed to rain last night and there are some primitive roads, like no gravel primitive, so clogging can be an issue. I put some 34mm Hutchinson Bulldog cross tires on my tubeless wheels, just in case. Brian is going to do great today, if he has good mechanical luck. I’m hoping to feel good enough this afternoon to do the hour drive over to Emporia and see the festivities and finish.

Last year, I was still banged up from shoulder surgery, so I was slow moving then too. Bill is there for support today, so I’ll be getting updates from him, as long as he’s in cell service. I had been kicking around doing the event, last minute. I had enough miles, but now it is just a distant thought. Live streaming of the Dirty Kanza, click here.

And on the upside, I’ve had no issues with saddle sores this whole week. Not even during my little stint below.

This probably would have went better not using Ugg boots. I needed cleats to get over the top and bottom of the pedal strokes. 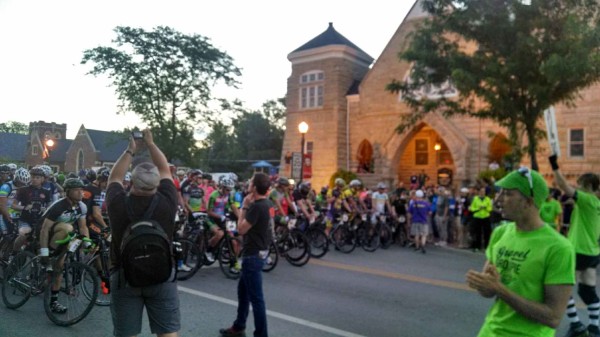 Dirty Kanza start this morning at 6am.