I saw this article at Cyclingnews that said that Xenon gas has been added to the WADA list of banned substances. But, the problem with this is this line in the press release – “The ban on xenon, which is not trace-able, is effective immediately.” Banning substances that aren’t trace-able doesn’t make much sense at this time.

Xeonon gas makes a person produce more EPO. A research paper, in 2009, by a team of British and Chinese researchers, showed that mice who were given a mixture of gases containing 70% xenon for two hours had double the amount of HIF1A and EPO in their system 24 hours later. That is pretty much more, huh?

But the rule banning Xenon is sort of like the no needles policy that the Pro Tour Teams are supposed to be adhering to. If you’re not familiar with the no needles policy, it is now UCI Regulations prohibit injections that have the aim of artificially improving performance or helping recovery. It means riders can no longer inject vitamins, sugars, enzymes, amino acids or antioxidants to aid recovery. It is hoped the ban will contribute to the eradication of doping by greatly reducing the use of injections in cycling.

Is a policy a rule? And if there is no way to know if someone broke the rule, then why have the rule to start with. I 100% guarantee that there are a ton of guys that don’t adhere to the no needles policy in professional cycling. No vitamins injections or IV bags after races? Impossible.

Don’t get me wrong here, I’m all for making sure that the playing field is as even as can be and making rules to stop the progression of doping in the sport makes sense. But, making rules that are not enforceable seem useless.

Can anyone out there name one rider, doctor, or team that has been sactioned for breaking the no needle policy? I think not. And I doubt there ever will be. It will be the same with Xenon.

Maybe these guys should focus on issues that they can do something about and not just make rules they know they can’t enforce. 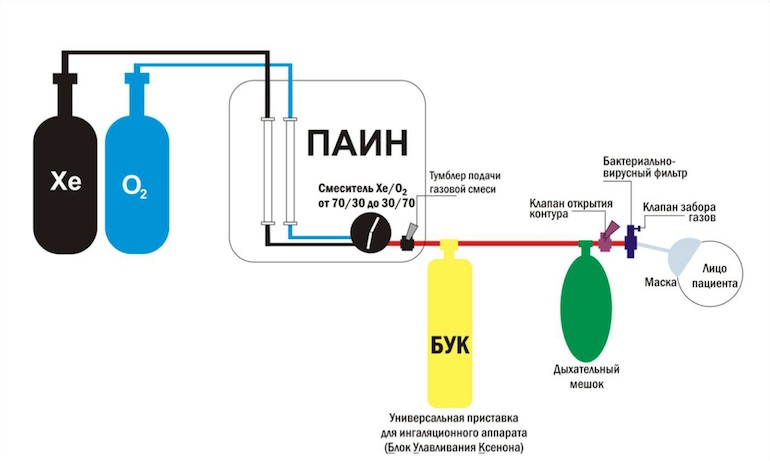 A Russian diagram how to administer Xenon gas.