I rode from Topeka to Lawrence yesterday on gravel, trying to avoid the wind a little bit and just enjoying the views. So, I had plenty of time to just think about stuff and yesterday it was about bike position.

I’ve been sort of squirming around on my seat a bit recently. There are multiple reasons for this. First and foremost, I have a saddle sore issue. I think this is a chamois problem, but probably my seat too. Plus, I’ve increased my cadence more and more, as I loose leg power through aging, so there is just that much more pressure on my saddle than before. I thought I’d taken care of this, last week was pretty good, but today it is back with a vengeance.

Riding a bicycle, you have 5 contact spots between you and the bike. I usually consider it 3 contact spots, counting the feet as one and hands as one. There have been lots of studies and spreading information about weight distribution between your saddle and bars. Hand position and reach changes this distribution percentage, as does cadence.

I tend to ride lower cadence as the road get bumpier. The lower the cadence, the more ability I have to absorb the shock of the road through my legs. This riding a bit off the seat, allows the bike to vibrate underneath me, thus transferring much less road shock. I do the same with my hands, holding the bars much lighter, just hard enough to control, but light enough to allow the bike to move on its own.

Gravel is a perfect place to mess around with different cadence and hand positions. Here in Kanas, the gravel isn’t consistent at all. The road maintenance is pretty spotty and they dump a ton of different size rock at different places. Sometimes it is smoother than the best paved road and then all of a sudden, a few inches of loose, deep rocks.

I was playing around with hand position too yesterday. Climbing steep hills on a gravel road is much like trying to climb on a MTB bike. Especially when climbing out of my saddle. I have to ride back over my saddle more, to keep traction on my rear wheel. It is the same as climbing steep climbs on the road when it is wet. It is a fine line between being far enough back to allow power to the rear wheel and as far forward to get the power you have transferred to your bike.

But, something I was messing with was hand position on my hoods, while climbing bumpy stuff. I found that I seemed to be getting more power, with less energy, by not holding my levers tight at all. Actually, sort of elongating my leverage by not having my fingers wrapped around the brake hoods as much as usual. And moving my bike more back and forth while doing this seemed to be easier. You’d think that I’d have this down by now. But, I think bodies change, wattage changes, and you need to do everything you can to try to get the most out of your body and bike.

I’ve been riding more on the drops this year than ever before. And the reason for this is the sprinter shifters I have on my bars with the Di2. Wayne Stetina gave them to me and told me I should try them. I was thinking, I’ll never use these. Now I’m using them all the time. Especially in criteriums. It is great coming out of a tight corner and being able to go through the gears so easily. I’m actually sprinting on my drops, which I hardly ever do.

It’s a little hard getting used to riding on the drops when I’ve been riding on the levers for so long. I heard someone on one of the broadcasts, maybe Phil Ligget on the Tour of California, saying that through wind tunnel testing, it isn’t so important how high you are on a bike, it is how narrow you are. If it was Phil, I should just throw that information into the trash, but it does make sense, somewhat.

My friend, Jim Thiele, who mainly races on the track right now, was talking about making a portable wind tunnel, to travel around the country, to allow everyday riders a chance to refine their positions. I’d be interested now in helping in that project. Watching Tayler Phinney ride in alone yesterday at the Tour of California, I was amazed about how much he changed his position on the bike at different times. It is really hard seeing the gradient of the road on the Internet, so it was very hard to correlate his hand and body positions to the slant of the road. I know he’s been in a wind tunnel a ton, and knows how to reduce his frontal area, the most, at all times.

Anyway, if you are out riding, you should personally try to change up your position a little. If you’ve been riding long enough, you don’t have to try to emulate the Pros anymore. Try your own positions, holding the levers in different positions with different pressures. You’ll be amazed how much it changes the power and energy expenditures. 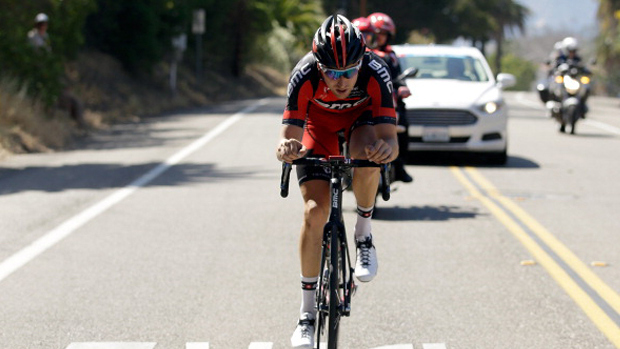 Taylor, way over the front of his bike. He’s not as narrow here as he was much of the time yesterday. 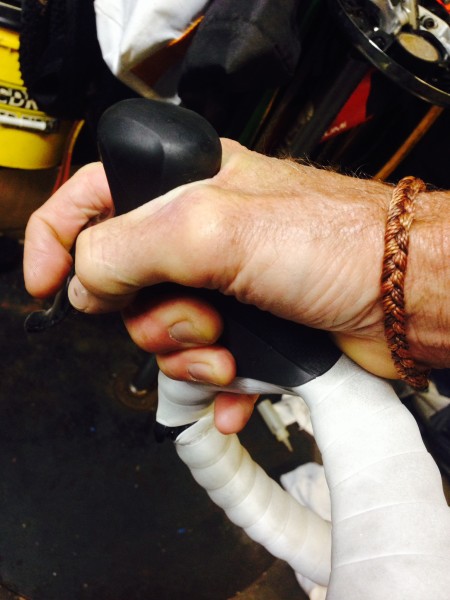 This is how I normally hold my brake levers. 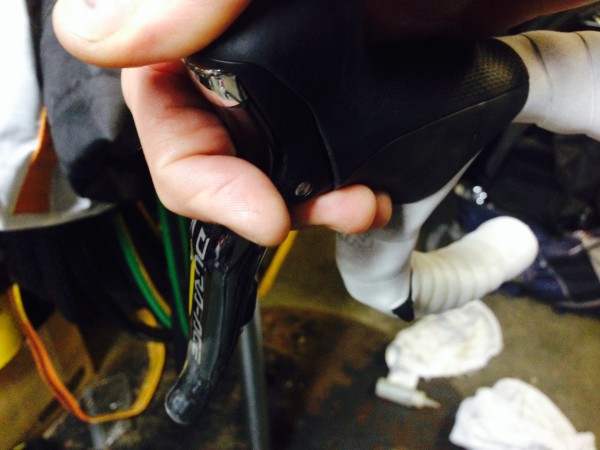 I was climbing with my fingers at the bottom of the levers, thus elongating my arms, giving me more leverage.