I was a little apprehensive about driving over 500 miles round-trip to race for an hour in Houston yesterday. But, like always, it turned out to be a good decision. I very rarely regret a race day.

The race course was pretty much up and down a parkway on the edge of downtown Houston. The course was just challenging enough, but there was a fair amount of wind that added to the action. I thought the race was pretty fast the first half. I don’t really have the rhythm of the racing down here in Texas yet. There are a bunch of strong guys, but it’s a little hard to read the race. These guys really know how to promote a nice race. At registration, they gave you coupons for free mexican food, cupcakes and smoothies. Everyone got a t-shirt and there was ice cold beer at the finish. Plus, a good prize list.

I pulled up to the race and I saw Bret Crosby and he said something about the “big money” brought me down. I actually had no idea of the prize list, I just saw that 80 guys were registered and only 20 something the day, before for a 90 mile road race. It turns out there was 3K for the race, plus a $1000 prime. I’m not too big on giant primes in races. I’d rather see 5 – $200 primes than one 1K prime. There is too much riding on the one lap and it encourages combines and mischief.

It was pretty hot, but not as hot as it could have been. I’m not used to the heat. That is my #1 priority right now, trying to get comfortable riding in extreme heat. I’m going to do it until it becomes a non-issue.

Anyway, the race was good. Pretty safe. I only got really winded once and it took a couple laps to get recovered. Eventually Bret Crosby and Heath Blackgrove rolled away. There were a couple more guys with them initially, but they got shelled pretty early on. I was right behind Bret when he was going and I made an intellectual decision that I didn’t want any part of that. I never felt good enough to think that I was going to be able to ride off the front, especially with Heath and Bret. They were going for the thousand dollars and were rewarded with it. I don’t know who won the prime, but I’m pretty sure they just split it. That is normally what would have happened.

I guess Heath was ripping Bret’s legs off and even though they were way off the front with just a lap to go, they started dicking around and next thing I know, they are just a couple hundred meters ahead, looking like they were going to get caught. Neither one of them wanted to commit, so they just started playing cat and mouse and it didn’t work out well for Bret. That is because Heath had at least one teammate, Michael Sheehan, who is super fast, so he didn’t have as much to lose as Bret.

The last lap was screwy. Everyone fighting for the front and once they got there, they didn’t want to necessarily be there. Lots of bumping and elbowing, even though the road was huge. There was too much wind and the circuit was too long to be at the front so early. The sprint was a long one, tailwind, not my favorite.

I blew it at the end. I had to hit my brakes a few times and lose a bunch of speed. Plus, we were sprinting into Heath and Bret and a lot of other guys that couldn’t get all the way to the finish line because they started it way too early. So, I was buried, which is how it should have been, riding it the way I did. I finished 16th, and they paid 20, so I made a little gas money back. Michael Sheehan won the race. He is riding super well this year and is still U-23. He just got back from Gila, after doing Joe Martin, so he has a lot of quality miles on his legs for early May. If he plays it right, he should be really good the next couple months.

I’m not judging myself too much. I can’t say I’m very pleased with how I felt, but it wasn’t horrible. These guys didn’t seem to be affected much by the heat. It definitely affected me, but it wasn’t the deciding factor to having a mediocre result, which is nice, not the result, but the heat tolerance.

I’m not sure what is going on next weekend race-wise. It is supposed to be really cool everywhere that I might be this whole next week. Even in Texas tomorrow, the highs are just supposed to be in the lower 60’s. In Topeka, the same, with low’s in the 40’s. Nice riding temperatures, but not good for the heat acclimation. 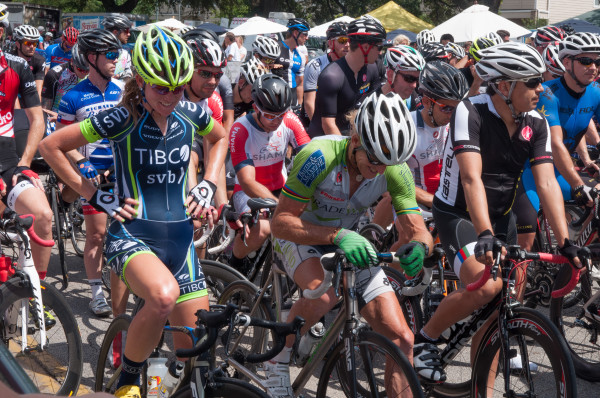 Here at the start with Lauren Stephens. She just won the women’s race and then came directly to the start for the Pro1 race. I was asking her about losing the $1000 woman’s prime she lost by an inch. She is riding crazy good this year. I got into a little tussle with her husband, Mat Stephens, on the last lap. I probably overreacted a little, but am pretty tired of all this silliness at the end of races. That is Carlos Vargas to my left. I haven’t seen Carlos for a long time. It was his first race of the season. 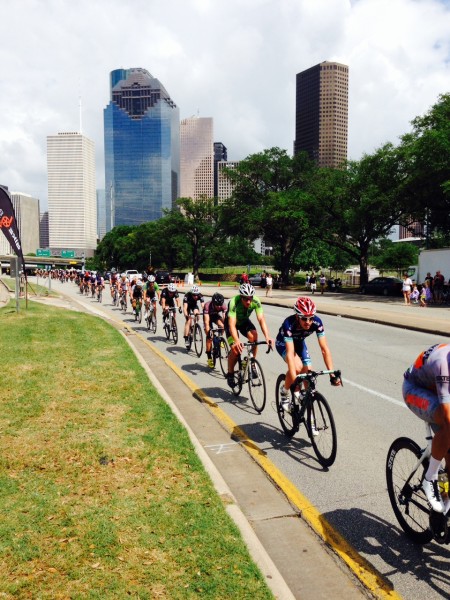 The race was strung out in the gutter a lot of the time because of the wind. 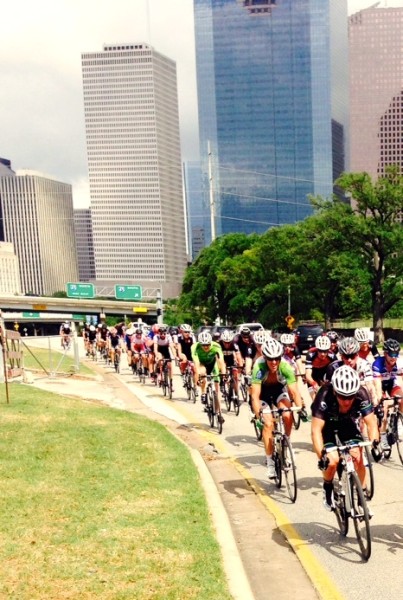 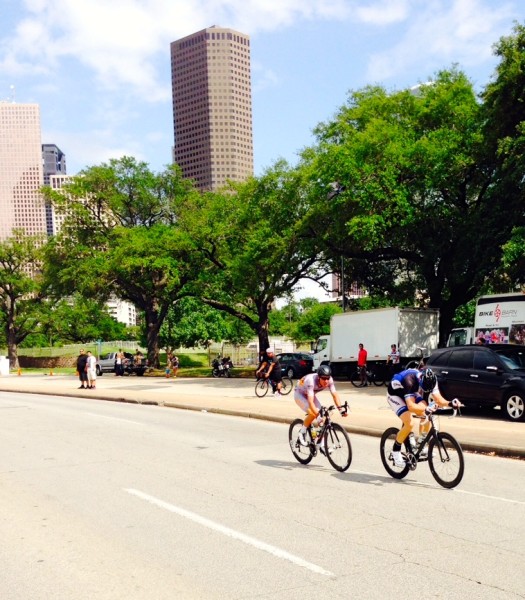 These guys, Heath Blackgrove and Bret Crosby, would have smeared us if they wouldn’t have been messing around. 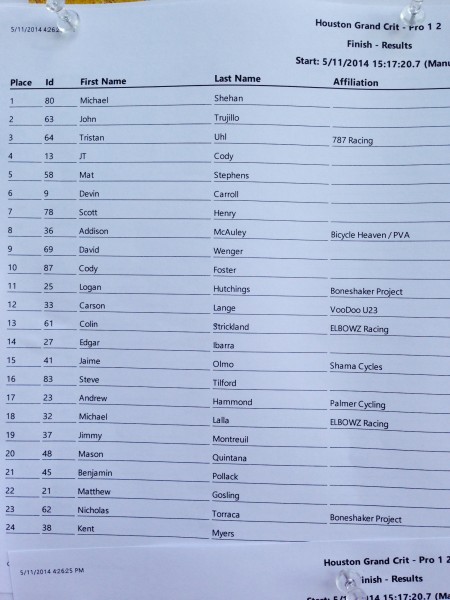 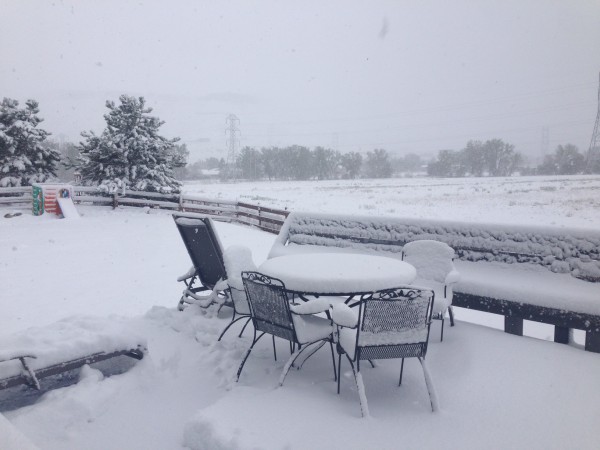 Vincent sent me this photo from Arvada Colorado this morning. Looks like it is a little colder there too.