I’d have to say that I really never paid that much attention to this doping thing in the sport while it was going on. Of course, I knew that it was happening, but I felt I neither had the energy or the ability to do anything about it. Maybe that was the same way a lot of people thought. I guess we are all guilty in that regard. And, don’t get me wrong, I knew it was really bad, like terrible. The drugs made it virtually impossible to compete on a National/International level.

These past few months, I find it amazing how many guys I used to race with, just casually admit that they used drugs. I had no idea. Most of these guys raced pre-EPO, but it really doesn’t matter. Well, it does matter, because the oxygen carrying drugs really changed the game. It was hard to tell if someone was just taking amphetamines, but it is/was very easy to tell if they are manipulating their blood. When I read Joe Parkin’s book, Dog in a Hat, I was surprised that amphetamine use was so prevalent. I’d raced a ton in Belgium and didn’t have a hard time staying competitive. I had no idea everyone I was racing against at the time was doping.

It seems like a lot of people I used to race with are having heart issues. A couple guys have admitted to me that they think their problems are created by taking stimulants while racing, mixing amphetamines with caffeine. I have no idea if that caused the problems or not. I wrote a post about how it is thought that maybe we shouldn’t be doing so much exercise as we age, related to our hearts. The jury is still out on that, but maybe all the pacemakers cyclists are receiving are just a bi-product of sport and the duration we compete, I don’t know.

Anyway, what got me thinking about this was I was looking for the results of Deer Valley, when Lance raced and happened upon the results of the short track from 2000. Man, are those some fucked up results. I have no idea why I would have even gone to that race. I must of been out of my mind. I feel bad for the guys on that list that are really just that great of athletes and not dopers. And, I don’t have too feel bad for that many, if you catch my drift.

And I did this for years, weekend after weekend. I sure must of not been bothered getting my assed kicked by dopers, back then, as much as it bothers me now. Maybe it was just getting paid to do something I love and I didn’t care that much about the personal results. I might do the same thing now. I guess I still do.

Looking back, I am embarrassed I didn’t take a more public stand against the whole stupidity. Privately, and sometimes when I was interviewed, I’d let my views be known, but it really didn’t seem to matter. I did an whole interview with Road Bike Action that pretty much said that everyone in the top 10, at every race, in Europe, was doping, and that was in the late 90’s. But, no one seemed to care. Maybe even me. Embarrassing.

Ned Overend once told me, a long time ago, “Steve, we were so lucky to be able to race internationally before the sport became polluted.” Ain’t that the truth. 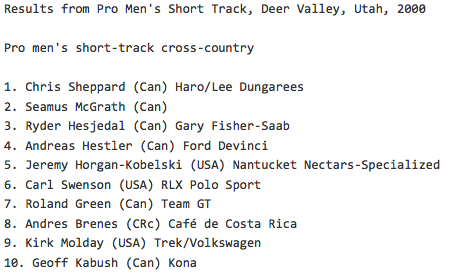 I feel badly for the few guys on this list that did it right and honestly.

Or, how many of these guys need their names removed from the results?