I rode a local stage race last weekend. Many times, local races are much harder than NRC races. More time in the wind, lots more jumping and such, is usually what occurs in a local race. This was the case last weekend.

The race went fine. Brian Jensen won the hillclimb, I was 3rd in the criterium, Brian was 2nd again yesterday and ended up 2nd overall in GC. It isn’t what we, the TradeWind Team, is usually happy with at a local event, but the field was much better than just a normal, local, 30 rider PRO 1/2 field.

My race was interesting, at least personally. I totally blew the hillclimb, which I might not ever understand. The criterium went just okay. We all rode alright, but knew it was going to come down to the 90 miles road race, which was yesterday.

The race was interesting because I felt so bad yesterday morning. Like I posted yesterday, I rode back from the criterium and fell apart on the way home. I got super overheated and had to stop for 30 minutes at a convenience store, and just drink and rest. I never felt the same that night. My legs muscles were continually firing and I felt sick at the stomach.

I woke up yesterday morning sort of nauseated. I instantly had to go to the bathroom. I didn’t really digest much dinner it seemed. And I kept doing that for the next 2 1/2 hours, over and over again. I got to the race feeling bad. Really weak and a little dizzy. I thought it was most likely caused by overheating. I was pretty worried that it was going to heat up quicker in the morning than it was forecast, which was a high in the mid 80’s.

The race started from the gun. Bob Cummings attacked as soon as we clipped in. I was at 1000 watts 10 seconds into the race. The next 2 hours, it was bad. I tried to fake it pretty well, but was really at my limit. Sometimes, I was barely hanging on. It was only on climbs that I seemed to be recovering some.

I thought I was maybe weak because I didn’t have any nutrition from the day before. I tried to eat and drink as much as I could stomach the during this time. Right about 60 miles in, I started coming around. It was probably a combination of the rest of the guys getting worse while I feeling just a little better. But, I was coming around.

I really did get back completely. Eventually, on the last 30 mile lap, the field split and I missed it. Brian made the split and I could have made it just then, but Jacob White, who was leading the race by 7 seconds was back with me and I didn’t want to drag him up. A few miles later, I jumped on a hill and bridged 80% of the way up to the 11 guys up the road, with Jordan Ross, Team Kaos, but we didn’t quite make it. Anyway, I got feeling better and better, maybe because we were out of contention and riding easier, but whatever the reason, I was going pretty good at the end of the race.

I really love the aspect of the sport that you can ride into a mass start bike race. Drafting allows you to stay in contention while your body is trying to get itself in order. Knowing that your body has an adaptive process and having the patience to wait for it to kick in is something I rely on constantly. I knew, from past experience, that there was a fair chance I’d feel better a few hours later. We’ve all experienced it, but it always surprises me.

Brian, Bill and I rode the 25 miles back to Lawrence after the race. I talked them into riding on gravel, hoping it would be a wind block, but it was just hot. I kept feeling better and better and at the end of the 110 miles, felt just about normal again. Go figure.

Brian grilled us some chicken and had cold beer in the fridge, so all was good.

This morning, I had to get up before 4 am and drive Trudi to the airport. She was flying out to Santa Rosa, CA, for the Tour of California prep. Being under slept is not great for recovery. I drove her the 80 miles to the airport and was back in bed by 6:30 am. I am a little tweaked this morning, but hope that will pass.

It is going to be in the upper 80’s, lower 90’s the next few days. I am going to try to get acclimated to the heat some this week. I figure I’d had heat issues the last few years and it is only going to get hotter. The best way I’ve found to do this is just ride, slow, very slow, during the heat of the day, for hours. I don’t really need the hours, but I need to spend the time in the heat. Hopefully it will work out. 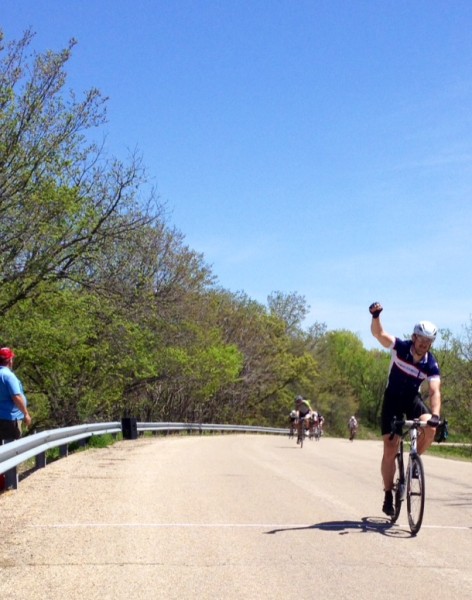 Lee Bumgarner won the race yesterday over Brian. 11 guys started together at the bottom of this hill and it shattered. 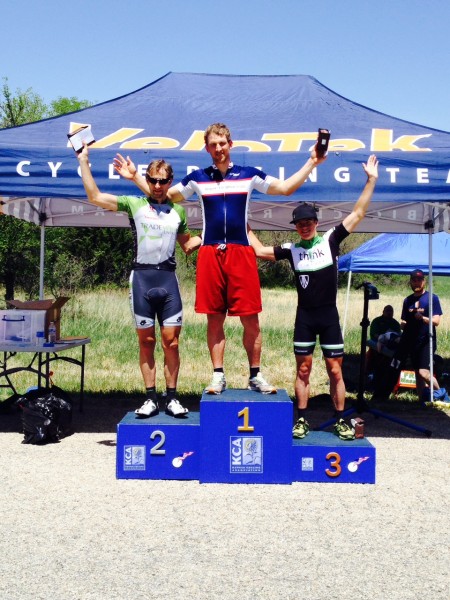 The podium, Lee in the middle, Brian on the left and Skyler Mackey, Think Finance p/b Trek Bike Stores, who moved up to 3rd overall on the final climb. 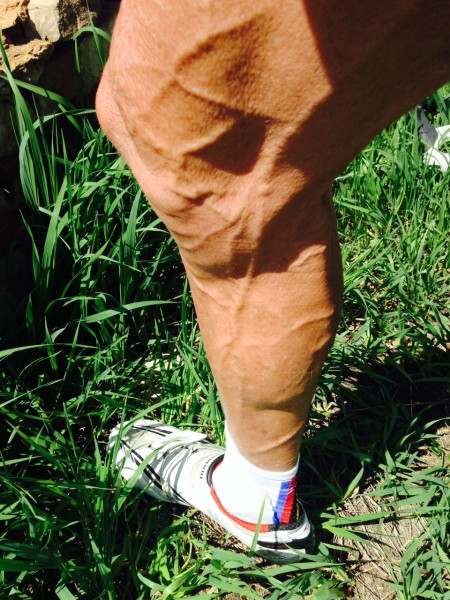 I’m pretty skinny right now. The veins seemed to be coming out with the heat. Kind of creepy looking. 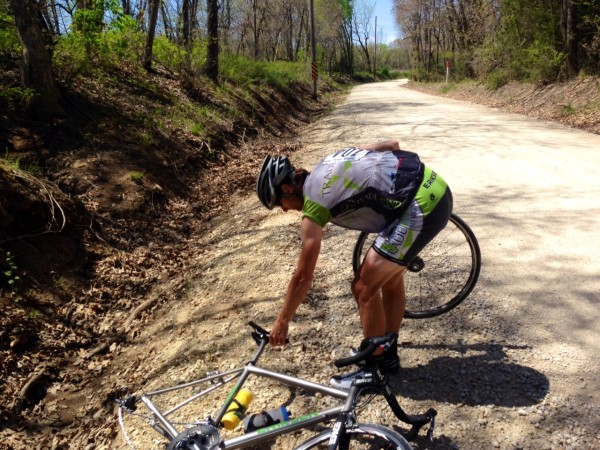 Brian wasn’t so happy I talked him into riding on gravel on the way to Lawrence, he flatted. 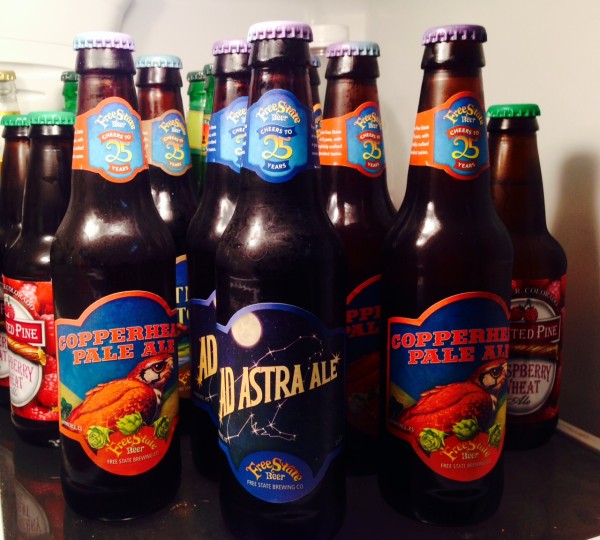 Brian had a full refrigerator of FreeState Beer.