I was sort of perusing the internet and came upon this headline story over at Velonews.com about “When you should replace skewers?” The headline grabbed my interest because I’d never heard of anyone replacing a quick release skewer for any reason other than scrapping it flat from falling on it.

So, I click on the link to the story and Lennard Zinn is answering a question from a reader about when to replace skewer. Lennard proceeds to answer the question with 6 different replies from skewer manufactures.

I personally know a few of the guys that answered and they all said that they had never heard of a situation where a quick release skewer failed and there really wasn’t/isn’t a test to check for fatigue.

I don’t get it, an article about a subject that does worry some people new to the sport, portraying that there might be an actual issue there, but there isn’t.

They might as well wrote an article about if Cancellara was using mice to power his bicycle or would it be good to use maple syrup to lubricate your chain.

I think Lennard should of just answered the question, since he already knew the answer, or maybe after he contacted the manufactures and got their responses, just said, “Hey, I contacted about everyone I know in the industry and you don’t have to worry about your quick releases failing, they don’t.”

I think there were plenty of cool technical innovation to bikes at the Paris-Roubaix last Sunday. Maybe Fabian’s bike could have been the headline story, not a failing quick release scare headline.

It sort of irked me that they used a attention grabbing headline, of a non-issue, to attract readership. It didn’t deserve to be the led story of the website Velonews.com. 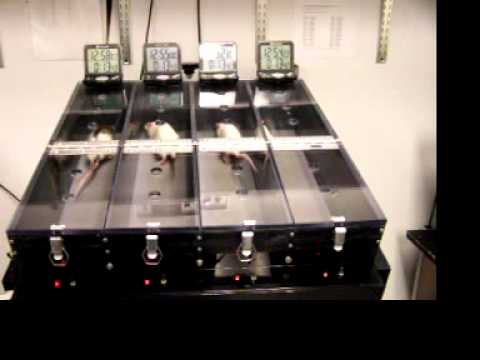 I took this photo up at Trek in Waterloo. They originally used mice, but now are testing out rats to power the new Madones.

Lance shows you how to use a quick release in this video.