Yesterday I got up at the crack and was on my bike before it even got light. I rode Sue to the Panikin and kept going up to Carlbad to meet the Wednesday ride that leaves from Starbucks. There were maybe 40-50 guys, more joining in route. The ride just goes up to San Clemente and back, through the marine base, Camp Pendelton.

I’ve been doing this ride since the mid-80’s back when it started in Del Mar and was really a who’s who’s of the best triathletes in the world. John Howard is probably the only guy that has been doing it consistently since then. And he was there yesterday.

The ride was good. I was sort of pooped from the day before, but was fine just sitting in. It got going pretty fast a couple times on the way up and back. What really surprised me is who fast the remaining guys kept going down the coast after we got back to Carlsbad. I had a pretty good group to ride with all the way back to UCSD in La Jolla. It is strange getting over 100 miles and being back before noon. It took nearly exactly 5 hours.

Anyway, it was an appropriate way to end a pretty extended San Diego training stint. I’m on my way to Texas now to ride the Houston MS150. I guess the real bike racing will have to wait for a couple more weekends. Joe Martin is at the end of the month. I haven’t went much further than that. Okay, better get back to driving. 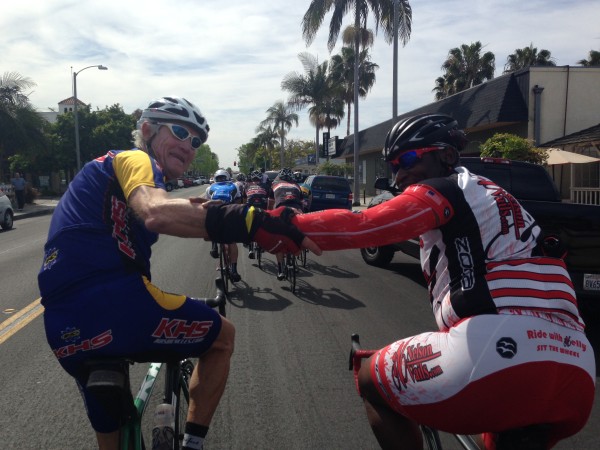 John Howard and Nelson Vails. I’ve known John since I was a teenager. He lived in Austin back then, but was originally from Missouri. This is Thurlow Rogers riding by the nuclear power plant , San Onofre.