I’ve always prided myself with being able to ride a bike with some sort of consistency. It’s a little bit of a lie to myself, because recently, I’ve been all over the map with consistency, but usually only myself and my teammates know. I’m pretty great at faking it sometimes. The sport of bike racing allows fakers to get results. I like that about it. I hate that about it too.

This year I’ve tried something new. More mileage, less rest. It has been going pretty well for the past 6 weeks. I’ve been feeling pretty good training, but better yet, racing. But, in reality, I usually feel pretty good early season before everything flowers and it heats up.

I decided to leave Kansas to escape the March through whenever now, burning. I’m not sure how many places in the US allow this to occur, the burning of vast areas of land, but it needs to be addressed. I know they do it in Oklahoma and Iowa also, but Kansas seems to have much more cattle land that they burn on a annual basis. I don’t really mind the burning of the fields, but so many people are just burning ditches now. And the ditches have the plastic bottles and trash that burn too, which obviously isn’t good for our lungs. And now, they’ve spread the duration over months, instead of weeks, to keep the air quality in Kansas City good. So, instead of having just a couple weeks of horrible air, in Topeka we have a couple months of pretty bad air. It plays havoc on my lungs and performance.

But, escaping the Kansas smoke might not be enough. Yesterday I rode 70 miles and never felt very good. Like I said above, I’ve been riding pretty great for a month and a half, so this might just be the end of a good cycle, but for whatever the reason, I was off.

When I’m off, my legs don’t go around freely. It is like my tendons in my legs are tight and I’m fighting against myself to pedal. It really gets bad in my satorius muscles. They get so tight, usually when it is hot, that it makes pedalling really a chore. It’s pretty frustrating when it occurs. I’ve blamed allergies, smoke, lots of things for the change, but I’ve never really figured it out. I thought that by using a foam roller and stretching more that I was on to something and I could maybe avoid the whole issue this year, but maybe not.

I’m not completely panicking yet, my legs might just be a little rebellious because they had to sit in a car, stationary, for 3 days. I hope that is the case. 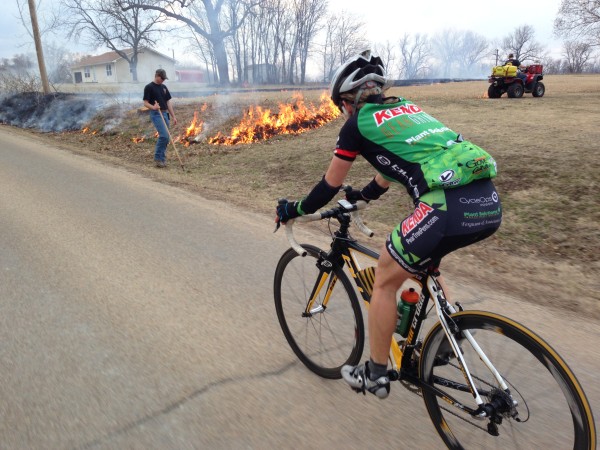 Catherine riding back from the race last weekend and the guy just burning because he can, not for the real reason for burning. 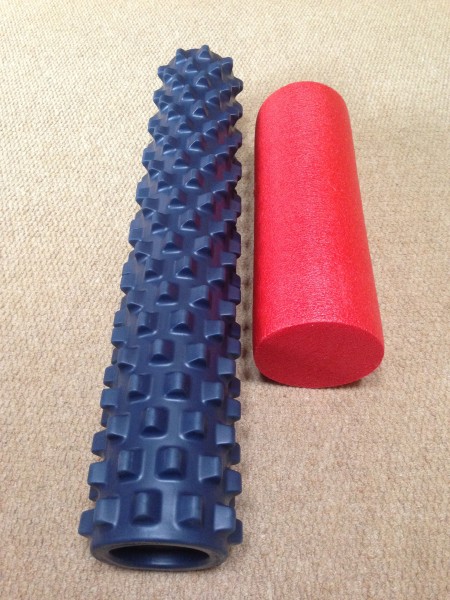 I had this little read foam roller, but Vincent gave me this gnarly one that really digs in a ton more.

7 thoughts on “Trying to Ride a Bike Consistently”