I’ve really enjoyed the last few weekends of racing here locally in Kansas. There has a been a mixture on new guys coming in from all over, Nebraska, Oklahoma, even 17 guys from South Dakota drove down for the nice Kansas weather. It makes for more interesting racing when you don’t know the capabilities of each rider and have to pick it up on the road.

Both races went well for me. I rode to and from both days, so got in nearly 90 miles each day, including the races. Saturday, since I really had no plan, I just decided to do the points sprints. That worked out well because the Kaos Team from Nebraska, had decided to pretty much do exactly the same thing, so they got their guys lined up and practiced doing leadouts. I won the first two sprints, but just barely, and not without a little jostling.

With about 10 laps to go, it got bad. I had just covered a move and 4 riders went up the road, not really an attack, but just went. I expected Bill, my only team mate in the race, to cover the move, so I didn’t go with it. And just a few seconds of hesitation was enough. Bill wasn’t in the race anymore, his handlebars broke. I jumped to go up to the move, but Lee, Kaos, was on me, which wasn’t the deciding factor, but they were ringing the bell for the last points sprint, which meant I wouldn’t be getting any points anyway. I realized it was a lost cause.

So, that was it. They rolled and we sprinted for 5th. Jordon, Kaos, was doing a lead out and I tried to pass him late, into the last corner, but he went wide, so I went wide and then I didn’t have any momentum. I led most of the way to the line, but was passed by 3 guys in the last few meters. I ended up 3rd overall, so I can’t be too pissed about it. I wasn’t sprinting that well anyway.

Sunday, it got cold and super windy. It was 70 on Saturday and I think it was in the lower 40’s all day Sunday. It took the Lemming principal to get everyone to ride to the race. The wind was blowing directly from where the race was at 30 mph, so headwind the whole way there. Kris flatted a sewup early on, so we were a little rushed for time. It was a slog to get there, used a ton of energy.

I rode in shorts during the race, even though it was kind of cold. I felt good immediately. I think it was the cold, but maybe I just felt good. A lot of attacking before Brian, who surprised Bill and I by showing, went away with Lee, Kaos. Lee was working for his team mate, Michael Smith, who finished 2nd to me last week. As far as I can tell, Lee sat on Brian the whole day. Brian told me that he was just trying to keep the wattage steady at 350 watts, while Lee sat. They rode away, which was great for me because they took the 1st and 2nd place points.

The remainder of the field, which was about 10 guys, just attacked each other and rode around. A little boring for me. I thought I might be able to shed myself of the rest of them, but it wasn’t to be. I put in a pretty good effort up the finish hill with a lap to go, but Michael and Shadd Smith didn’t seem to be much bothered and were there at the top. I kept going, knowing that if there were only 3 of us, it didn’t matter where I finished, I would win the overall. Pretty soon all 3 of us were pulling.

We went hard to the last time up the climb. The climb is hard, maybe 600 meters, with a steep pitch at the bottom, it flattens out for a little bit and then up steep again. Pretty straight headwind up the hill. We slowed down at the bottom sort of started playing cat and mouse. Just then, the remainder of the field came around the bottom corner. Shadd didn’t like that and just started leading it out. I was last on, knowing Shadd had committed and it was too long. Michael jumped Shadd and I sat on Michael. Maybe 50 meters from the finish, I came around Michael easily. Well, not so. I thought I wasn’t in hard enough gear, so shifted down in the back, only to realize, too late, that the wind was crazy hard and that I was way over geared. I turtled by Michael and said to him as I went by, “Think we’re a little over geared or what?” I was doing maybe 60 rpms and he was probably doing 40. Not a stellar way to finish a race I felt good riding. I should have know what gear I was going to sprint it a lot earlier than 50 meters from the line. Brian ended up flatting with a lap to go, got a wheel and still got 2nd, which was good. I was 3rd and won overall. Brian moved up to 3rd overall, so pretty good day for the TradeWind Energy Team.

Anyway, good miles, good racing, about all you can ask for early season locally. I’m going to head out to California and try to do some bigger bike racing. Not sure exactly what, MTB or road or both. 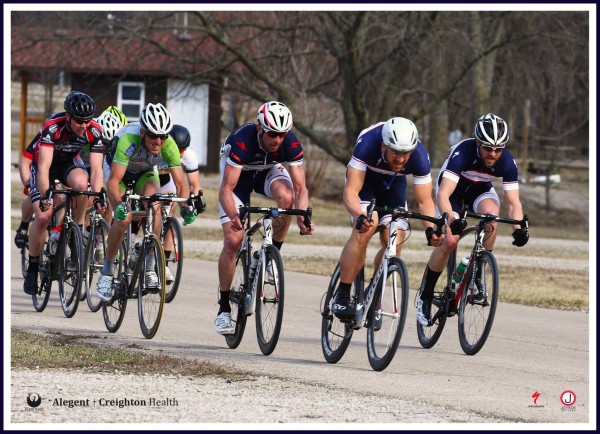 One of the early team Kaos leadouts

Video of Saturday’s Springfling Criterium. At the end you can see how I mess up the final sprint, but really just ran out of juice. I’m not good with a tailwind downhill. Much better uphill.