Yesterday was a strange day riding. I wanted to get in at least 4 hours, but hadn’t really taken a rest day for a while. But, the weather was supposed to get bad last night and today was supposed to be colder and super windy, so I talked Bill into going out with me.

It was pretty hot. At least hot for around here in March. It wasn’t supposed to be so hot, but somehow they missed it and the temperature was in the mid 80’s. I thought I felt pretty okay when I left my house, the pedals seemed to be turning over pretty good. But, after a couple hours, I didn’t feel that great. I still was set on the whole ride, so we turned to the east and headed over to Lawrence, which would put us at a 50 mile point for a stop.

We got to the coffeshop and both Bill and I had rear flats. We were planning on riding back to Topeka on the River Road, which is gravel, but we used two of our tubes before we even got there. I had a piece of wire in my tire and I think Bill’s flatted on his rim strip. Anyway, at Starbucks, they had the air conditioning on. And it felt great. I used the restroom and it was super cold, like a meat locker. I didn’t realize how hot I was unti then.

The water coming out of the faucet was super cold. Way colder than Topeka’s. I love that about the winter, nearly ice cold water out of a faucet. I like that about up in Dennis’ in Cable and most mountain places in Colorado. The water is cold in the summer. I washed off, a little, to get all the road grime on my hands from changing my tub. The cold water was rejuvenating.

I told Bill that I though I was burning twice the calories that I would be at 55 degrees. He agreed. Anyway, we started back towards Topeka, it’s 30 miles, and just a bit down the road the wind switch from the Southwest to the North. Like instantly. And it got really windy, over 30 mph. We had a few miles to ride north, so we weren’t that pleased about it. We were riding on a flat road and I noticed Bill was standing. We were going 11 mph. It was windy. And getting colder by the minute.

We decided to take the gravel back even though we only had one tube. It was probably not the best decision, but it didn’t bite us this time. A few miles after we turned onto gravel, we came upon a section where they had poured new gravel. It wasn’t just gravel, but dirt and gravel. It didn’t seem like they had just re-graded the road, it seemed like they had poured new small gravel and dirt. Weird. Anyway, riding west, with the wind gusting from the north was challenging. It was like our wheels were being blown out from under us. It was pretty sketchy for a couple miles.

Finally, the section cleared. I hadn’t realized it, but I had been feeling better and better ever since the wind changed and the temperature dropped. The temperature went from the 80’s to the 60’s, to the 50’s and just kept dropping. Finally by the time we hit pavement, it was in the upper 40’s. My arm and hands were cold, but my legs felt great. Super great.

I can’t remember a time where I’ve experienced this before without water/rain being involved. I think Bill felt the same way. We both were definitely cold, but were riding pretty well. I’m sure some of it could have be psychosomatic, but whatever the reason was, it applied to both of us.

Controlling body temperature is a super important part of the sport. It always amazes me how much clothing some new riders wear to race. It takes so much more energy to cold yourself than to keep yourself warm. Plus, you can always put on a wind vest or a wind jacket to bring up the heat just a tad.

I’m still not exactly sure what a human’s body does to get used to heat and cold. I do know that I’m not used to riding in hot conditions as of now. I wasn’t good a couple weeks ago in Texas, when it was in the 80’s and I wasn’t good yesterday, until the temperature dropped into the 50’s. Strava temperature number, etc. here. 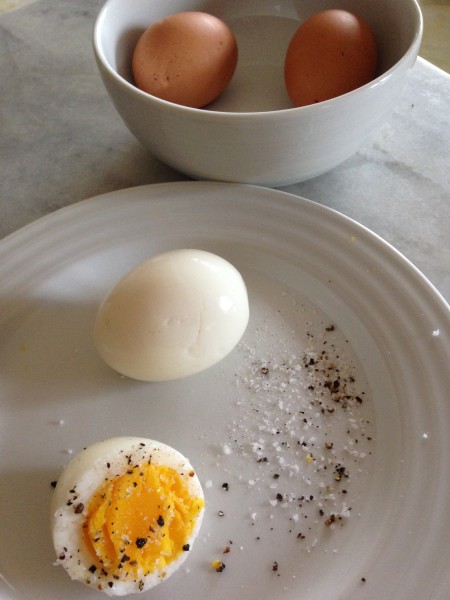 I’ve been eating way more protein the last few weeks when I’m riding bigger miles. I’ve been hard boiling eggs and just eating them with salt and pepper as a snack.