Daylight saving time is really the start of the cycling season for many here in the United States. It is the first chance that nearly everyone that works, a normal job, has to get out to ride during the work week, when it is actually light outside.

Here in Topeka, daylight saving time is the start of the “club rides” or evening rides. They initially start at 5:30 pm, but eventually rotate closer to 6 pm during the summer. It gives everyone a chance to get from their job to the ride. 3X a week, the ride starts at our house. I guess that it is because it is centrally located and they are tools, etc., here. It is kind of strange how many times a year someone shows up for a ride with a pretty major mechanical. That is the one downside to meeting at a coffeeshop or any other non-bikeshop business.

When I’m really racing hard, I tend to try to ride earlier in the day. I don’t like eating dinner so late, so close to bed, which is always the case when you’re riding until 8. But, that isn’t the case now.

I’m not sure how many people showed up yesterday, somewhere between 12-20. It was super nice out, mid 70’s, and what was really nice, hardly any wind. Like less than 10 mph. This time of the season is a little hard for many. The fitness level is all over the map. Some guys have only been riding outside on the weekends, riding the trainer during the week and some people have a ton of miles.

Contrary to what you might think, Eastern Kansas is pretty hilly. Not big hilly, just rolly hilly. Other than riding over by the Kansas River, pretty much every other direction is hills. The glaciers that made the Great Lakes moved down this way and stopped here. So, there are a lot of weird rocks laying around and shortish hills. That makes it a little difficult to keep a group of riders of different fitness levels together. But, the hills aren’t the biggest issue usually, it is the wind. It is windy here. I think Kansas is the 3rd windiest state, behind North Dakota and Texas. Must be Western Texas. Anyway, spring and fall especially, the wind blows. It is hardly ever less than 15 mph.

I personally like the wind. I look forward to using the wind in planning my ride. Sometimes when I feel unmotivated when I leave, I ride out with a tailwind. That way I get pretty far out, fool myself into thinking I’m feeling all good, when in fact, it is all wind aided. When the wind is really strong, I try to take the group mainly on a sidewind ride. It just depends how many people show up. If you get many more than 15, then the echelon is too big for the one side of the road. But, riding into a strong headwind, with a diversified ability group, makes for lots of moaning.

Anyway, yesterday was nearly perfect. Nice temperature and no wind. Everyone seems so excited to be riding. I loved it. I ride everyday and sometimes kick myself when I start to take it for granted. But, it is impossible to take riding for granted when I am riding with other people that are so enthused to be out riding.

There was a little of the first real training ride of the year thing going on yesterday. We started out of town pretty brisk and it really didn’t slow down too much. We have this guy here, Jack, that slacked off the whole winter. Actually, he started slacking last fall and continued through the winter. So, he has more than he share of winter weight on. He is saying he is all worried about staying on, then takes off at 500 meters for the “first” sprint of the season. Little Jack went after him and they did a super long, really close sprint. It looked like it must have felt pretty bad when it was over.

Anyway, Jack stayed on the whole ride, even though it got ramped up the last 5 miles. We had a 21.5 mph average at the city limit, which wasn’t screaming fast, since it was nearly calm, but was pretty fast considering.

I’d ridden a ton of miles the past three days and was planning on trying to rest yesterday. But, everyone was so amped up, I just went with it. I could feel the hills in my thighs, a little pissed at myself from deviating from my “training plan”, but it’s really all about enjoying the moments, not about being regimented.

We were cruising back towards Topeka from the west at a good clip, 25 + mph. What little wind there was, was at our backs. I was looking around at the long shadows, leafless trees, frozen ponds and thought I was so lucky that I found this sport. Every dip we went through, the temperature dropped 10 degrees. More when there was a creek. It felt fresh, like spring.

We rolled back into town right about dusk. A couple guys had driven over for the ride, so we stood around a while and talked some. The day was just about perfect. It could pretty much define why I still ride bikes. 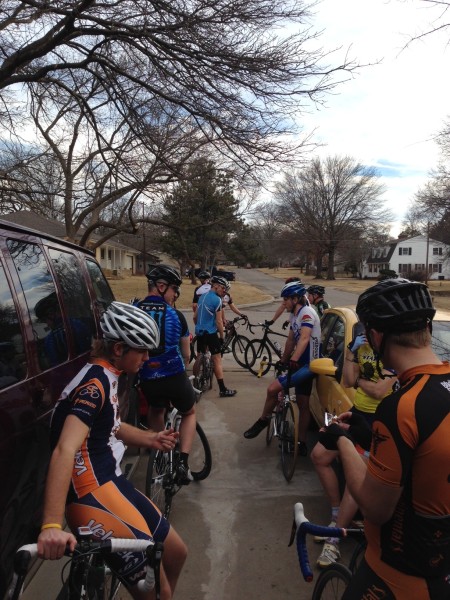 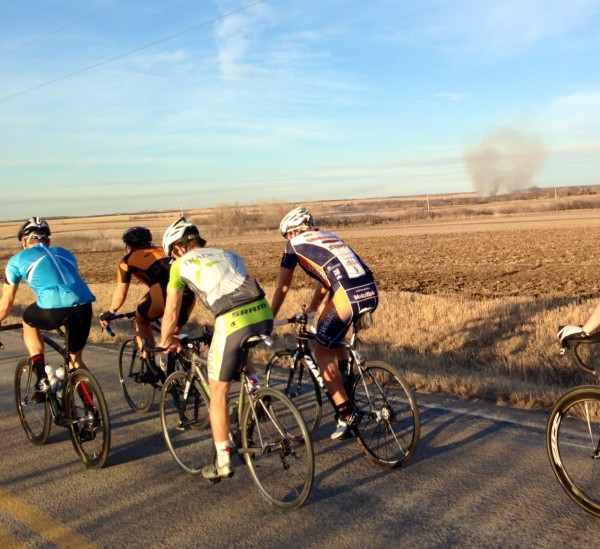 I like the long shadows, but hate the burning of fields, that has just started. 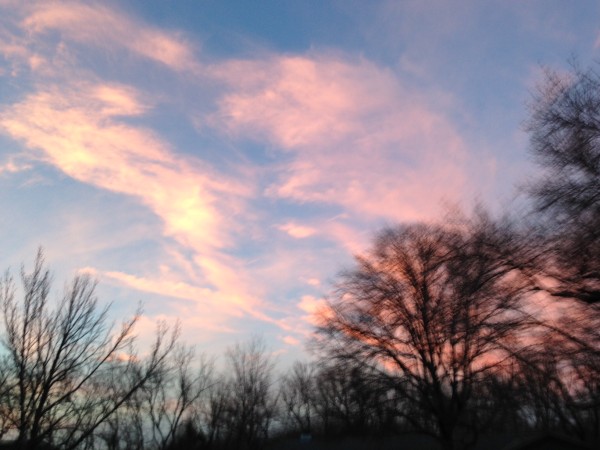 The burning does make for beautiful sky. This is just riding down my street towards my house.