Man, this past weekend went quickly. I rode somewhere about 250 miles, Friday through Sunday, with around 60 of it being pretty hard racing. I didn’t rest up much for the races, riding 80 miles on Friday, but wanted to train through the weekend. I felt pretty great yesterday in the road race. At least great for me. I had a 363 watt weighted average (327 watt power) for an hour and a half yesterday. I don’t watch that so much, but it seemed pretty high.

Yesterday I spent mostly riding. We rode the 25 miles over to the race, raced 35 miles, then I rode 20 miles over to Lawrence with a bunch of guys and finally the 30 miles back to Topeka. A little over 100 miles total. And it was super windy. The last 30 miles was pretty much into a 25 mph headwind.

The race was good. There were less than 20 guys in the 1/2 race, but, the quality was good, which just made the whole thing harder. It was nice seeing Shadd Smith make an appearance at a race. He rode great and finished 3rd, being out numbered pretty heavily.

I ended up getting in a move eventually with Shadd, my brother Kris, my teammate, Brian Jensen and two Team Kaos guys, Jordan Ross and Michael Smith. Michael and I have been in the same group the last 3 races. We ended up dropping Kris on the hill with two laps to go, and the next lap I jumped away, taking Michael with me. Brian and Jordan were obligated to sit and that only left Shadd, who was smarter than trying to chase. Michael and I were both intent on riding pretty hard, so were rotated until the last kilometer climb. I was pretty sure I was climbing better than him, even though he put in a pretty good dig at the bottom of the final pitch, I didn’t have any trouble coming by him. So, I won, Michael was 2nd, Shadd jumped away from Brian, who was charging up to the line. It was nice feeling pretty good both days and getting in a ton of jumps and hard riding. Couldn’t have asked for better training than that, even though it was racing.

It was in the lower 60’s, so I made the most use of the nice weather, riding as much as I could. I didn’t have a chance to call Ned and get the play-by-play of the Fat Bike Nationals he won on Saturday in Cable, Wis. I’m sure I’ll hear about it eventually. That guy has ridden less than 1000 miles for the year. He is a physical freak, always has been. Anyway, it was an awesome ride.

How about not an awesome race to go to, the Tour of Murrieta in Southern California, last weekend. I’m not really sure what the deal was, but the Jelly Belly UCI PRO Team had somewhere between 10 and 13 guys in the race. That was with less than 60 total starters. That is a joke. If there isn’t a USAC rule against that, there should be. If I entered that race and they showed up like that, I’d ask for my entry back. Here is a link to the overall results. Seems like with that many guys, they could have put more than 4 guys in the top 10. Maybe they felt a little guilty and spread the wealth some. Guess their training camp wasn’t hard enough or something, I don’t know.

Trudi made it to Brussels alright and is flying to Pisa, Italy this morning. I’m not sure what she is doing there, thought she was doing a camp in Sicily, but what do I know.

Okay, I’m still trying to exactly figure out what I’m doing the next couple weeks. They started burning around here, so I’m looking to leave the area while it turns into Armageddon. I seem to be on the right track so far this season and don’t really feel like doing the same old thing again, breathing a bunch of smoke for the next month and a half, but haven’t really seen anything that has caught me eye. 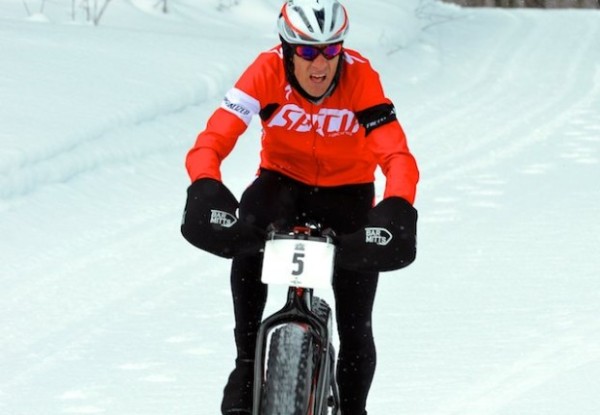 Ned on his way to winning the Fat Bike Nationals Championships Saturday. Check out Fat-Bike.com for the up coming story. 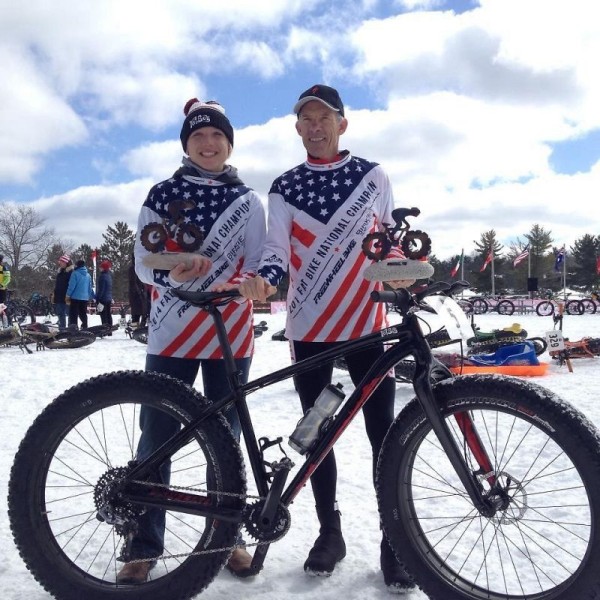 Ned and Jenna Rinehart, the woman’s winner. Jenna is from Mankato, Minn., has won Chequamegon also. 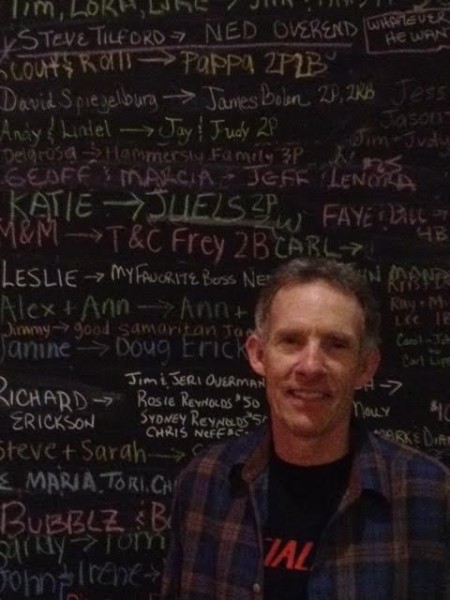 Ned, at the Rivers Eatery, Saturday Night, after winning the Fat Bike Nationals. I called Mick and told him that I was buyin’, whatever he wanted food/drink. Guess he didn’t collect, or maybe he did, I don’t know. The pay-it-forward is still on the board, at least when the picture was taken.

8 thoughts on “Weekend Wrap Up”