Yesterday I jumped into the Insight, with Trudi and Bromont, and headed the 200+ miles over to Columbia Missouri to race a road race, Froze Toes. And it lived up to its name. It wasn’t raining or anything, but when I was driving over there, it was sort of snowing. And it was pretty cold, not freezing, but pretty, 30’s.

I woke up a little tweaked from the day before. I’m not sure why, but after riding in the rain Wednesday for an hour and a half, my hands have been freezing. Riding back from the criterium on Saturday, I got pretty cold. I’m not sure why I’ve been missing the right clothing selection, but it does drain you a lot more than you’d think.

Anyway, I don’t really mind racing when it is cold. I just don’t like getting ready for races when it is cold out. Especially when I don’t have my van, or a car to stay warm in before the race.

I wasn’t too bad at the start, even though I didn’t ride a pedal stroke for warm-up before the start. There were somewhere around 40 riders there. The course is a 30 mile loop, mainly heading North and South. The wind was pretty strong from the North, so it was going to mainly be a headwind, tailwind deal. There was just enough sidewind, in retrospect.

I won’t go over all the minute details of the race, but here is pretty much how it went from my perspective. It turned into a stupid attack/coast thing right from the gun. I kept trying to roll through and get the group moving along at a good pace, but they weren’t having any of that. A couple groups of two rode away and the remainder of the field was just doing all these silly jumps, when wasn’t all that comfortable.

This is the 2nd day in a row where the race started out chaotic. I don’t understand why a bunch of Cat 1/2 riders would attack like crazy at the start of a race, when, obviously by the results, they didn’t have the fitness yet to do it. When my form is questionable, I always try to error on the side of caution, draft as much as possible, do small system checks to see where I’m at.

By now we were riding with a strong tailwind, so we were hauling ass. One of our group, I think Robert Smallman, flatted on the potholed laced road. So then, there were 4 of us. Along with Grant and I, it was Isaiah Newkirk and Dustin Morici. Isaiah, Grant and I were all pulling pretty good. Dustin was hurting, but kept trying to do his share. That is how it went for the next 40ish miles. Just a few miles from the finish, Dustin finally came off on the final tailwind stretch. I told him after that he should have just told us he was going to sit on. We would have slowed a little to let him get closer to the finish.

So there were 3. Seemed like both Grant and Isaiah were getting a little tired. I was trying to put in a hard effort, but didn’t want to kill myself to the extend I wasn’t going to be able to contest the race. A couple miles out from the finish, there is really the only hill on the course. I figured I’d see how wasted my guys were and put in a jab over the top of the hill I got maybe a hundred meters ahead, but sort of stalled there. I really wasn’t putting a 100% effort in, but was hoping that it was going to work. It didn’t. I could see the finish, I was maybe a mile out. There was a descent and then 1K uphill to the finish. I coasted the descent, worried that only Grant was chasing me and then Isaiah was going to jump. I try to make it a point at all times during a bike race that I have at least one good jump in me, at all times. I wouldn’t have if I kept going full throttle.

So, they roll up and we slow to nearly a track stand. We were all kind of hurt. We started sprinting maybe 300 meters out. Isaiah instantly got popped. I jumped Grant, hoping to get him to sprint early. He did, but it wasn’t too early for him. I didn’t have the timing down and when the road flattened out, he pulled a bike length out of me close to the line. I realized I was going to run out of real estate, I lost.

I wasn’t too depressed about finishing 2nd. Overall, the day was nearly perfect. I wanted to go and ride really hard, which at the start of the race, seemed like it was going to be frustrating impossible. It was great getting into a small group that wanted to work together. It was super fun riding with those guys. Plus, it was the first time I’ve ever won a frozen pizza in a race. I won a frozen turkey in Tijuana Mexico once, but never a pizza.

I ended the week with nearly 500 miles, which was a ton considering how windy it has been and how much of that I rode alone. Plus I got in two local races, which like I posted a couple days ago, can end up being much harder than bigger events. I “lucked” into breaks both days, so got exceptional training in both weekend days. I feel pretty good this morning, so I think I’m on the right track so far this season, but, you never know. 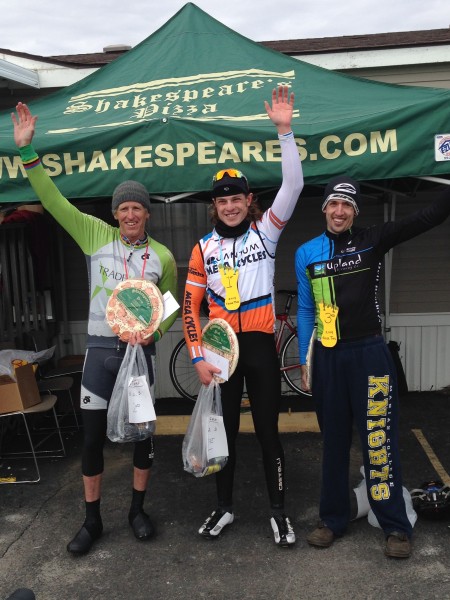 The “podium”-me, Grant and Isaish. I think I’m older than if you add the ages of both of the other guys together. Shit. 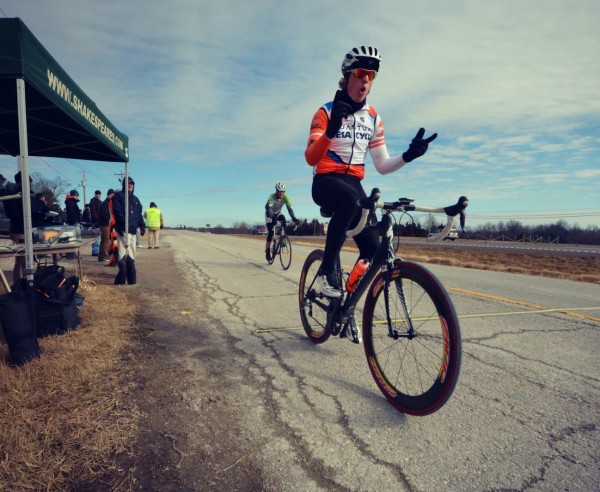 Grant was pretty stoked on the line. 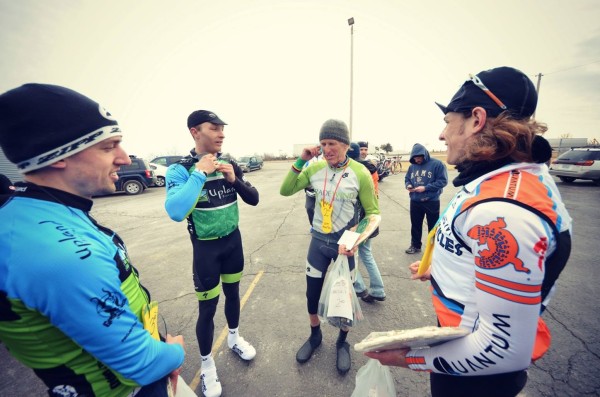 Four of the original 5, talking over the race after. I love hearing the other guy’s views of the race. 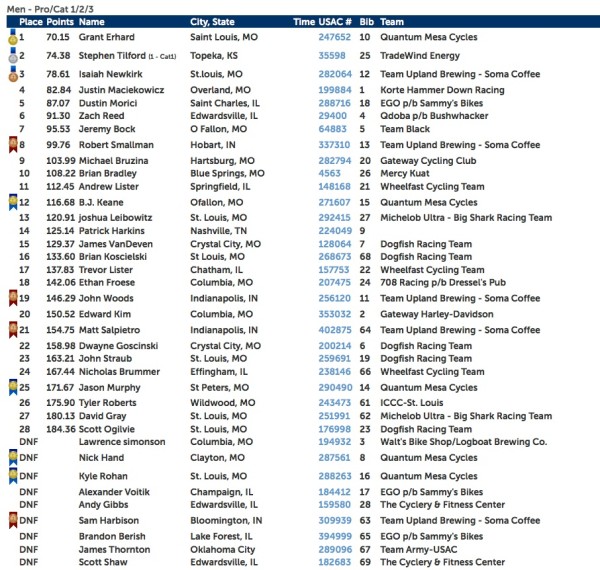 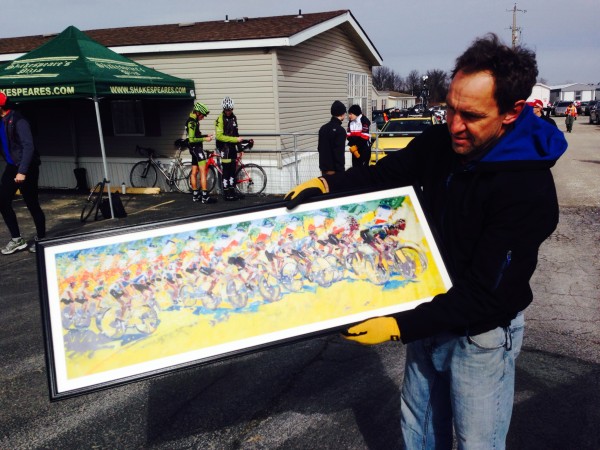 The is Ethan Froese. I’ve know him and his brother, Aaro, promoter of Froze Toes, forever. He gave me this print by his father before the race. It was very thoughful. After the race, I got a chance to catch up a little with Ethan, getting a bite to eat with him and his son Noland.