Yesterday I was mildly surprised. Not only about that I won the race, but a multitude of other things. I was surprised how much it hurt to take it up 10 notches from training to racing. It surprised me how strong other guys already are mid February. It surprised me that I forgot how fun it is to corner at 30 mph on sewups.

The race was a one hour criterium, but better, or worse than that, it was a points race. So there were 3 points sprints, so one about every 15 minutes, plus the end. There were about 40 + guys at the line, which seemed pretty great considering. Seems like criteriums have been getting a bad rap recently. Maybe it is a Pro deal, Pros not liking criteriums much, I’m not sure, but for some reason, the criterium is looked down upon by the average Joe bike racer.

I think criteriums are great. I think that it is the best public viewing of bike racing and probably the only segment of the sport that might eventually become a successful American spectator sport. Plus, it is a great way to get in a ton of speed work and intensity without going out and banging your head against the wall alone.

The race started out crazy fast. The course was pretty much a rectangle, with one corner a sweeper. Right from the gun, it was on. I was way over my limit, or what I considered my limit, from the get-go. Somewhere during the 2nd or 3rd lap I was thinking that maybe I wasn’t going to be able to finish. I didn’t want to miss the front group, so was covering just about anything that moved. I’m not close to fit enough for that. So I followed wheels for a couple laps and then, probably about 5 laps in, I felt the field was pretty done, so I put in a half-assed attack. Nearly immediately, Joe Fox, Cycle City, blew by me and proceeded to take a full lap at, what I considered, warp speed. When I looked back after 3/4 a lap, there were just two other guys, Garrick Valverde, Velotek, and Michael Smith, Kaos.

That was pretty much the right combination of riders for a successful break. We soon got into a fairly even rotation. If anything, I was pulling the shortest, but I had so many question marks floating around, I wasn’t willing to make the stupid error of getting gassed and spit out early.

Pretty soon they rang the bell for the first sprint. It was going to be straight into a pretty strong head/crosswind. We all kept in rotation and Michael led it out. I didn’t have any problem coming around him, which mildly surprised me. It gave me some confidence, but was still early.

So, we kept the rotation going pretty much until the end of the race. I won all three sprints, one by just a bike throw over Garrick. Eventually, towards the end of the race we had lapped nearly everyone. On the last lap, there was only one group left to lap, a big group with my TradeWind Energy team mates, Brian Jensen and Bill Stolte, and most the other historically better riders. We rode into them with just 2 corners to go.

This is when I got a little mixed up. I was trying to follow Michael Smith, who had a pretty strong team mate leading him out, but somehow we got juggled pretty far back when Joe Fox attacked with 1/2 a lap to go. Then Garrick somehow came by us and had a huge gap with 200 meters. I was just following Michael, drafting him on the left. Somehow, maybe a wind gust, I ended up on the far left of the road, which was a pretty beat up, cracked surface. I hit a parallel crack to my tires and had to do a big stutter coast to keep my balance. That was all she wrote. By the time I got going, I couldn’t get by Michael. Garrick was a few lengths ahead. But, since I’d won all the intermediary sprints, I still had enough points to win.

I wasn’t too bad at the end. My left leg was not up to speed, which is becoming normal. But I seemed to have okay form compared to everyone else, which was nice.

We’d ridden over the 30 miles from Topeka and got some extra clothing on and headed back pretty much right after the race. We weren’t going to have much extra daylight. But the problem was the temperature dropped super fast. Like 20 degrees in an hour. I was once again frozen. Mainly my fingers and feet. I think they got way too cold on Wednesday and it is going to take awhile before they quit punishing me.

Right now I’m driving to Columbia Missouri for a 60 mile road race. I couldn’t talk anyone else into going, so it’s just Trudi, Bromont and me. I didn’t get enough sleep, which is usual on race weekends, but unsual now, since I haven’t been racing for so long. I think the last criterium I did was the first week of July, the Nationals Criterium Champhionships. That is weird.

Okay, that is all for now. My worry today is mainly about dressing correctly. It is only supposed to be in the mid 30’s, so I don’t want to miss it. 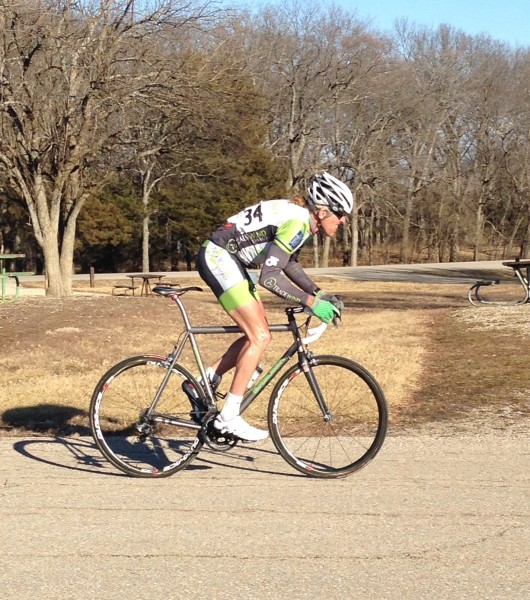 I probably jumped 20 times during the hour. 19 more times than I had previously this year training. 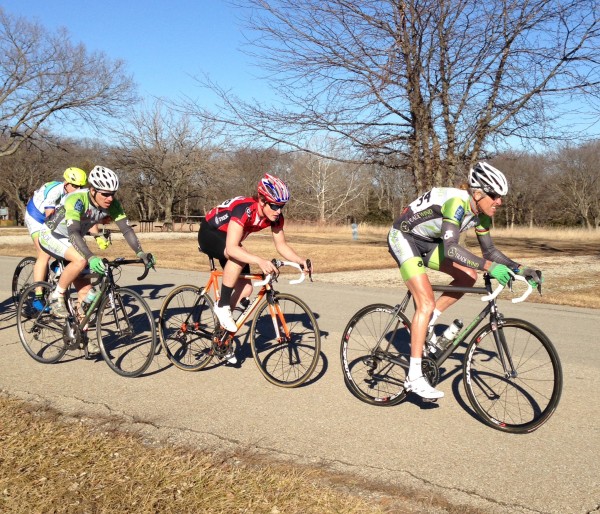 Early in the race with Peter Boyd and Bill Stolte. 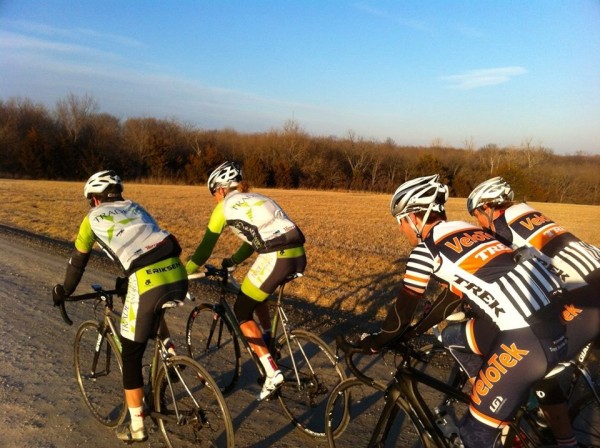 Riding back to Topeka after the race with Bill, Ian and Jack. Photo by Kris, who was there too. 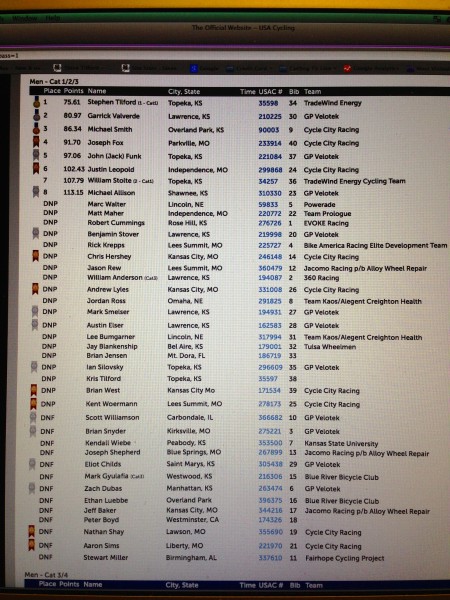 9 thoughts on “First Race, First Win of the Season”