Yesterday I went out for a longer rider again. Bill, Ian and I started out, but they turned around after a couple hours. I was hoping to get in a triple digit effort again. I rode over to Lawrence and got a cup of coffee. The temperature was around 50. Not really warm enough for bare legs, but my left knee had been hurting a tad and sometimes when I have something covering it, the problem get exacerbated, so I just put on a bunch of oil to ride.

Anyway, when I walk out of the coffee shop, there are a abunch of raindrop spots on the sidewalk. And the temperature was noticeably colder. I thought, man, this is not going to be good. I had around 50 miles and it was 30 miles back to my house. I had a wind vest in my pocket, but wasn’t prepared for rain. The wind was from the southeast, which meant a tailwind home, but not super hard. Pretty much immediately the road was wet, my tires throwing spray up.

I felt in a rush, stressed. I could see that over the city of Topeka, it was raining hard. Plus, lightning. I was riding straight into it. I got about a third the way back and decided to head North to maybe skirt the storm. I could see clearer skies North. Right when I got to Perry, which is where I needed to turn West again, it started raining. Not super hard, but raining. And the temperature had dropped again.

It was now in the 30’s and I was getting completely soaked. It is so strange how you can be okay riding in the rain until your feet and butt gets soaked. After that it was miserable. The spray off the road was super cold. Plus it was full of sand and a salt taste, which tells me I had it in my mouth.

The weird thing is, and this nearly always happens, my legs felt great. Well, that might not be accurate, because my legs were partially numb. But, whatever the accurate description, I could turn about any gear.

The luck of it is that my power meter quit reading when I got back on my bike at the coffee shop. I stopped once to try to get it to sync, but it was raining and I didn’t spend much time with it.

I wish I would have that data. I rode back to Topeka, consistently over 25 mph, sometimes over 30. There was a tailwind, not crazy, but present. Definitely not enough to explain the speed vs. effort ease.

I would really like to know what cold water on my legs does to make me able to do something as remarkable as this. I had just around an 18 mph average at 50 miles and was at 20 mph when I got home, frozen, at 85 miles.

And frozen I was. I lost use of my hand right about when I got to the city limits. I couldn’t shift, even with Di2, so I was pretty much stuck in a 53 X 14 all the way through town. It didn’t matter much, my legs could turn it. I rode through town, in the rain, at rush hour, well faster than the cars.

So, I ask the question again, what physiological change does my body go through when my legs are super cooled when exercising. I’ve always been good when it rains. But, usually it is during the summer and I attribute the results to bike handling. But the few times I’ve had situations like yesterday, I’ve always had the same experience. Super legs, can push any gear, without respiratory penalty.

I didn’t ever go as hard as I could. I wasn’t looking for that kind of effort and my right knee, which I previously had no issues with, had hurt when I started out. Some Patella tendonitis like pain. I’m using blue cleats on my new shoes and haven’t really gotten used to the 1 degree of movement. I might put back on red cleats. I have experienced knee pain getting much worse when I ride big gears in the cold, so I was pretty backed off the whole way back, if you call 27 mph backed off.

Anyway, if anyone out there has an answer to this question, let me know. My legs are kind of tweaked this morning. Like I pushed big gears, for an hour, with 30 degree water spraying all over them. Go figure. 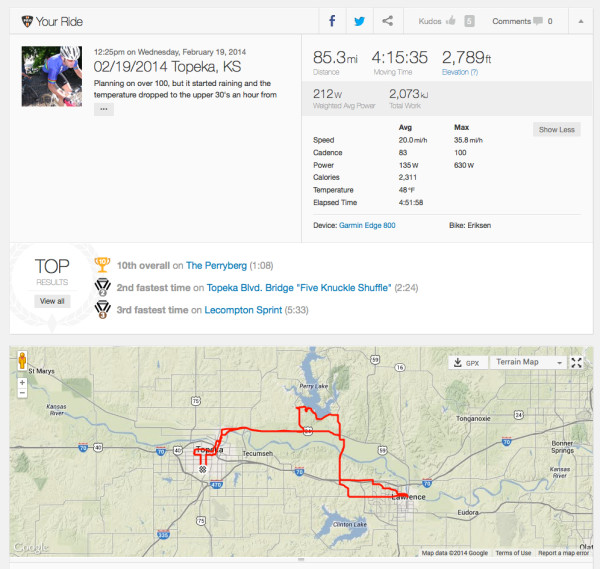 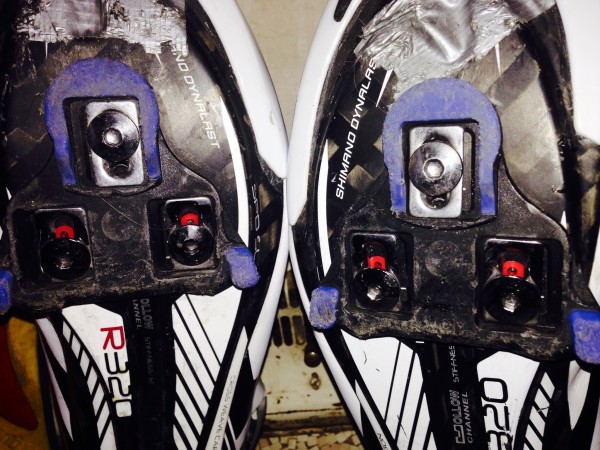 I’m not totally sold on the blue cleats yet. I tape the holes in the bottom of my shoes in the winter. 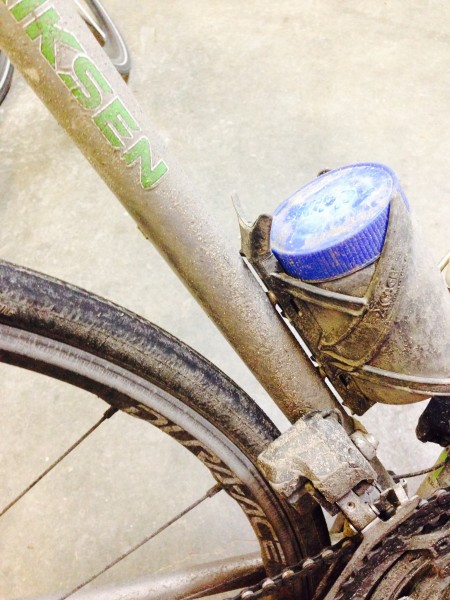 My bike is a mess. I was too frozen to deal with it after the ride, so it has had a night to solidify.