I was talking to Catherine Walberg before she left Topeka and headed back to Seattle. She got in 3 pretty good rides with us here in Topeka, but is worried that she is behind, even though it is just mid-February. I think it is strange how we now judge our form and dedication to the sport because of what we now know others are doing at the same time. I blame, or credit, media for this phenomenon. I think it is more of a hindrance than a tool, this comparing what we are doing to what others are.

Don’t get me wrong here, I think there are valid reasons to research how others train, trying to allow ourselves to progress forward in the sport. But the day to day competition that athletes are doing in training, really isn’t a great way for anyone to control his form, thus get to an ultimate goal.

This time of the year, the weather controls most of what a lot of us can do training. That, and of course, the amount of daylight. I’m a big fan of the moving up of daylight saving time in the spring and back in the fall. The more useable hours of the day of daylight is a good thing for people who like to spend their extra time outside.

The more I use a power meter, the important I believe its information is to me. I don’t sit there and stare at my Garmin all day, but I do look at the Power curve number on Strava and compare those numbers to previous rides I’ve done. I don’t do much structured training, so I am not comparing workout to workout, but I do think that general numbers do indicate a positive trend upward in fitness or a negative trend.

I’m still on the fence about racing up here, a local training criterium, the Spring Fling, on Saturday and then the season opener road race, Frozen Toes, in Columbia Missouri, or heading down to Austin and doing Walberg Road Race and Pace Bend. My recent historic races have been in Texas. There are more riders down there and the field is a higher quality. But, there is the 10 hour drive each way. If I went to Texas, I’d probably feel obligated staying there next week and then race the next weekend.

The next weekend would be a quandary. If my formed improved, I’d like to do the Mellow Johnny’s MTB race. I haven’t done a big MTB race in a long while and would like to get back into it a little again. I’m just not sure I’m anywhere near the form to do something as intense as that. These MTB races have gotten so short, under and hour and a half, that I have to imagine that the effort is closer to a hard cyclocross than a “normal” MTB race. Plus, I haven’t ridden a MTB bike in months, so I’d have to spend some time on it before. There are always the Lago Vista road races the same weekend, which are very hard, and fun, races.

I’ve been riding alright the last two weeks. Yesterday I got in 108 miles. It was really about a 95 mile ride, but Bill and I had to do some junk miles to get to 100. Then I just kept going until it was really dark, so got in another half hour. I felt pretty unbelievably good for riding in the wind for that long. We road back from Lawrence on gravel, which was harder, but kept us out of a stiff headwind.

I’ve been using a foam roller to try to help my left leg work better. The area where I had shingles a few months ago isn’t back up to speed yet and I think it is helping. At least I seem to have more power than before. I like to use new techniques, but am a little lazy when it comes to doing them on a daily basis.

Okay, I’d like to get some good miles in again today. It is only going to be in the 40’s, and windy of course, but it is supposed to be raining/snowing tomorrow, so I guess I’ll rest then.

Early season is just that, early season. Don’t stress about keeping up with others, do what your lifestyle allows. One of the coolest thing about our sport is that there is always another weekend, another month to race, so if you can’t participate now, there is always tomorrow. 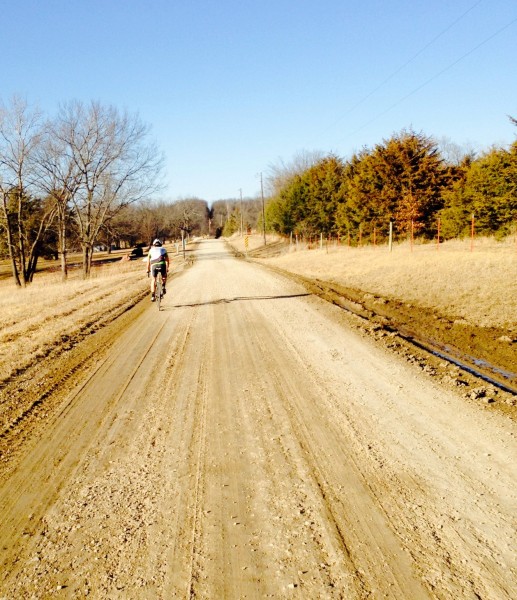 The gravel road back from Lawrence to Topeka was in pretty bad shape the first half. We were on our road bikes, sans extra tubes and air, so we were riding gingerly.