I’ve been racing cyclocross forever. The calender of the sport has really changed recently, and by recently I mean just the last few years. Way back when I started racing cross, there were maybe 5 races you could do before the Nationals. That is if you didn’t live in Santa Cruz, Seattle, or spots on the East coast. But Nationals were sometimes as early as Thanksgiving. Now, it really doesn’t matter where you live, as long as it is super rural, there are cyclocross races to do on a weekly basis.

I’ve only missed racing the National Championships twice since 1999. Once, I was putting a rubber roof on a building, by choice, and then this year, sick, hurt, whatever, not by choice. One thing that I have really noticed as a difference between the two times I didn’t race and the rest of the time is how I perceive the finish of the races.

Both just watching in Bend and now this time in Boulder, I felt a sense of finality when the riders cross the line at the end of the Elite race. It seems so abrupt. These guys have been traveling throughout the country, sometimes the world, putting nearly every waking moment of their days into the sport, then poof, done. I’m just standing there, watching the crowds disperse and I feel sad. It is so weird, because I don’t feel that way when I’m racing.

I thought about it a bunch yesterday and decided it was me. I think that when I’m not in the fray, it seems so distant. And I know the amount of energy and time it takes to compete a full cross season. And it is done in a moment. I feel bad for the riders, which surprised me a few years ago in Bend, but surprised me more Sunday in Boulder.

It must just be my mindset. I’ve been fortunate enough to be going pretty well at Nationals historically. I’ve come around at the right time. I’ve never been that good at “peaking” for an specific event, but it seems to be easier for me in the winter. Probably lack of allergies or something. But, not matter the reason, I’m riding well. And I have a good mental outlook, anticipating transferring my cross form over to the early season road races. But when I am at square one, being a spectator, I have a complete different mental outlook.

I don’t have the stellar form left over from cross and don’t have a set plan. It is just that much harder. Having a full cross season, makes the transition to the road season seamless.

Anyway, I think it is strange how much differently I perceive the end of the season from the point of view of a racer or spectator. I guess it makes life interesting, but I’d just as well just have one observation situation, that of a competitor. It is just a life that is much simpler. 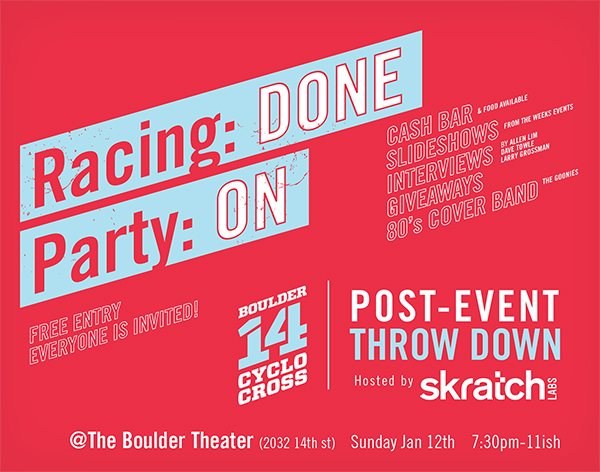