Watching the World Cup race today in Rome, I was amazed about how few people were there to watch. I could have put the race on in a local park in my neighborhood and had more spectators. I think that the World Cup should travel around between countries, but if that is all the people that can entice out to watch in Rome, then the UCI should consider a venue change.

I raced a World Cup MTB race in Rome back in the mid 90’s. There were thousands of people there watching. But, MTB was a much more popular sport back then than cyclocross is now.

I’ve probably been watching too much Belgian TV, where even a local cross race is watched by thousands, but the turnout today in Rome was pitiful by any standard. I have a hard time believing that there even a question about whether they should be a World Cup in the US. We might have not have the finances to put on the race, but I would pretty much guarantee that we would have a minimum of 50 times as many spectators as there were in Rome today.

I know that the UCI, and others, are looking to the US as the next big thing in cyclocross. I very much doubt that will happen. Cyclocross is a participatory sport, not a sport where it is going to have a professional circuit. There are just way too many issues that will keep it, at best, where it is currently at.

The sport has no history here. If MTB racing can’t stay healthy, and it was pretty much started here, then I don’t hold much hope for cross. The country is way too big. Where cyclocross has been popular historically, countries like Switzerland, Holland and Belgium, it is very easy to do a very short drive with all your equipment to compete. That will never be the case here. It makes the costs too much initially for the sport to get a footing.

It was nice seeing Katie Compton beat Marianne Vos again, when Vos has had a little more time to get back up to speed. It’s still close to a month until the Worlds, so I would count Vos out.

Congratulations to Don Myrah and Henry Krammer, who won their respective Master’s events in Switzerland, yesterday and today. It is going to be a long haul back to the US, then race at altitude just a few days later. But, winning in Switzerland is much better than winning in Boulder.

Okay, it is -21 out right now. It is supposed to be -38 tonight, with a high of -11 tomorrow. That is pretty cold. No skiing for sure. Dog walking in the woods might be the outdoor entertainment for the day. 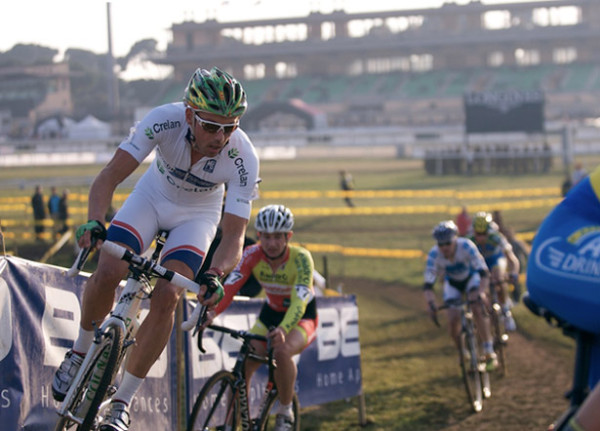 This isn’t this year’s race, but it is about the same amount of spectators there were again in 2014.