I’m considering bugging out of here early and heading South. The temperatures here are stupid cold and the outlook isn’t looking good. I’ve been waking up with a pretty sore shoulder, so I’ve been snowshoeing a couple times a days for a couple hours each time and not skiing. It’s only a workout when we’re in fresh snow, trailblazing.

Today I’m going to head to Hayward, back to civilization, to get some antifreeze at the Ford dealer. I was driving Stacie back to her condo late on New Year’s Eve/Day, and the heater quit blowing warm-ish air. It was close to -30, so I thought maybe something froze. I was a little stressed. Then it came back on for a couple minutes and was gone again. I thought maybe the waterpump was going. I checked underneath the van yesterday and didn’t see any fluid leaking. Well, that’s a lie. The power steering pump had some power steering fluid drips on it, but that isn’t a big worry. But, I think the antifreeze is really low. Like, low enough it isn’t circulating. It’s either that or the waterpump.

The van hasn’t been losing fluid until I got up here. What I’m thinking the cause is because I’ve had the van plugged in all night. I read somewhere on the internet that other people have had issues with their block heaters and fluid loss. It says that when it is super cold out, the antifreeze is heated up, but the waterpump’s pulley and shaft stays cold, thus the seal doesn’t do its job and fluid gets past it. That seems like a good reason, but I don’t see any antifreeze in the snow. And if I’m right, there is a fair amount of antifreeze missing. I’m hoping to limp back to somewhere warmer, like a heated garage in Topeka, to work on it. If I do that, I’ll probably just fix the power steering pump too. I have to remove the radiator to get to the water pump, so I’d have access to whole front of the engine. I haven’t changed the serpentine belt and done some of the other stuff I’d like to do for awhile.

I got on my bike and rode a mile yesterday. It was -10 or so. My Garmin showed it was above zero, but it just hadn’t cooled off yet. I thought it was important to ride on the first day of the year. It seems like I’m getting a little superstitious as I get older. I wonder why that is.

I need to make some phone calls and get some new components for my road and mountain bike. I know it is late already, or maybe early to some, but it is nice to start off the season all ready to roll. That is one hassle up here. My AT&T cell phone doesn’t work hardly anywhere. I like being out of cell range contact, somewhat, but there are also downsides to that.

Okay, I’m stressing about the van, so I need to get moving and try to figure it out. We’ve got a date to snowshoe out to a marsh this afternoon and see if there is a bear in a den there. I’ll post photos either way. We’ve been out there before. It’s 50/50 chance of habitation. It is equally as cool. You can climb into it and check it out if there is no bear. If there is a bear, well, there is a bear. The den is under a tree and covered with snow, except a very small hole. Inside, it is very clean, no poop, and the tree roots are rubbed smooth. It is awesome. Okay, that’s it for now. 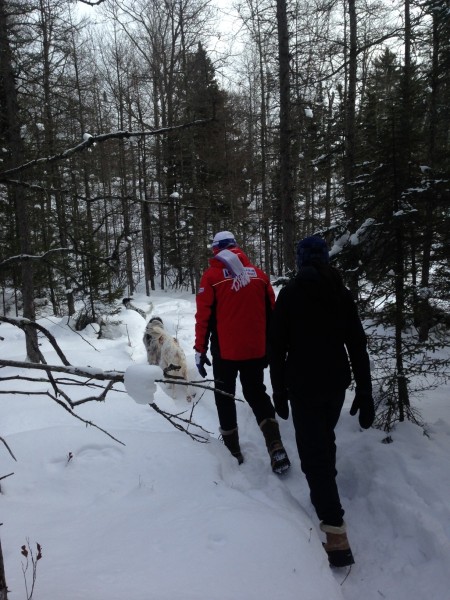 The trails are so frozen hard that you don’t even need to use snowshoes where we’ve been before. 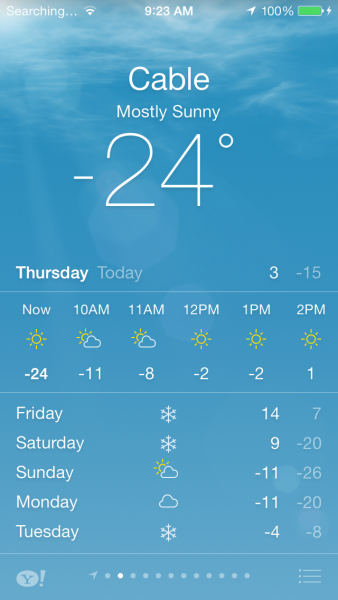 Check out the future forecast. Burrrrr.

14 thoughts on “Gotta Get to Some Warmth”