Yesterday was the famous Double Birkie Ski. Tom Schuler started doing this 27 years ago. I started doing it, maybe, the 3rd year, with Greg Lemond and a bunch of other elite cyclists. Lemond went and won the Tour de France that year. I had skied, maybe, 200 kms in my life, so I was pretty worried before hand. But, the last 15-20 kms, all my compatriots fell apart and I ended up dropping them. I was too uncoordinated skiing to be able to get tired. I went on to finish 198th in the Birkie that year, starting from the 3rd wave. I made it into the Elite wave by less than 10 seconds.

Anyway, yesterday went pretty okay for me. The worst I felt was the first 20 kms. And the group was skiing really slow. My shoulder held up pretty good. It is pretty stiff this morning, but no horrible.

There were close to 50 skiers at the start and lots more met us a various points along the trail. I’d bet over 100-150 people participated total.

I ski like a hack. One year, maybe 5 years ago, I skied a fair amount and got a lot better. But, that didn’t really show yesterday. I have no issue getting winded or tired. I have issues with synchronizing my arms and legs. Actually, it’s much more complicated than that.

Anyway, I met up with all my Kansas guys, Stacie and Karl from Louisville, plus Dennis near the turn around. So, I skied with them for a few k’s. Then we had lunch, which was great, a sandwich and hot soup from the Brick House Cafe.

Starting back, I just decided to ski and not stop. I left my guys early and skied straight to OO. I walked across the road and at the warming hut, Tommy Matush was there, ready to go. Tommy told me he was toast and I needed to take it easy. He wasn’t that toast, but he was teetering a few times. About 1/2 way back he said he had to stop for a Coke. He pulled a micro Coke out of his pocket and shared it with me. It was one gulp each. I hadn’t had a Coke for quite a while, it tasted pretty good. Another guy hooked up with us at OO, his name was Tristin. He was skiing pretty well. He said he was a cyclist from Chippewa Falls. It turns out he won the Fire House 50 this year. Tommy stopped a Mosquito Brook, so Tristin and I skied back to Fish Hatchery together. It was nice having someone to finish up with.

I can’t complain too much about yesterday. My back is a little sore, but that is from shoveling the roof. My biggest complaint is a blister on my right foot. Cyclists don’t get blisters. I haven’t had a blister in a decade at least. I was internally whining like a baby the last 10 kms. Plus, when I got back, one of my toe nails had turned blue/black. That isn’t a common occurrence either.

Today the temperature has dropped considerably. It is close to 0 right now. I’m going to go over to OO and do a ski clinic with Yuri Gusev from CXC. I’ve never really had a ski lesson, so I’m sure he’s going to rip my “form” apart. I’m a little worried about standing around too long in the cold. I hate standing around in the cold. That is one of the worst parts of this sport.

Tonight it is supposed to get close to -20. That is pretty cold. It is supposed to stay cold for the next few days. High below 0. Might have to snow shoe a little more and ski a little less. 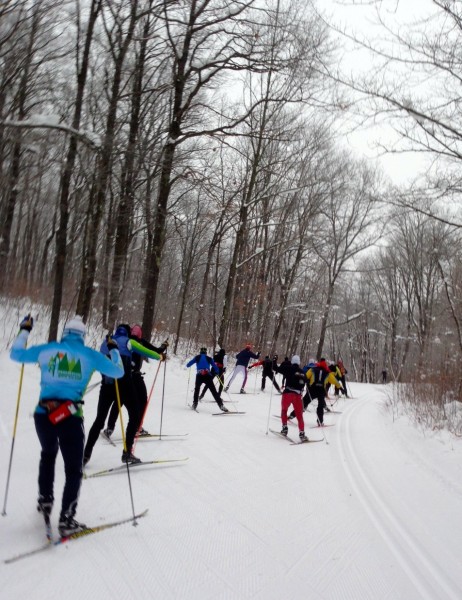 The group heading out from Fish Hatchery. 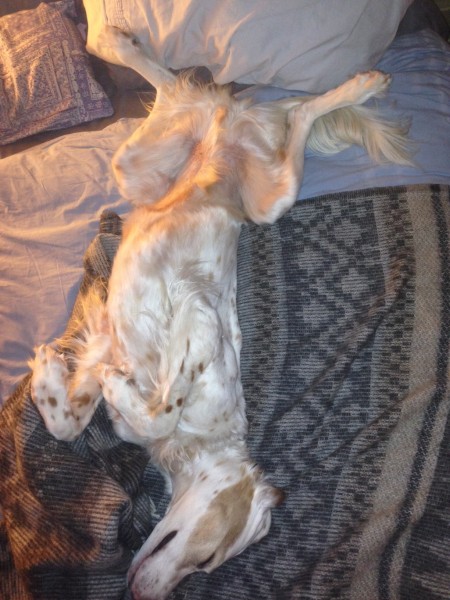 Bromont is pretty done every night from romping in the woods.

One thought on “Double Birkie Ski”