I saw an article at Cyclingnews that said that the Telenet-Fidea cross team offered Zdenek Stybar €500000 to ride for them, plus they estimated that he would earn at least €300000 in appearance fees and prize money, maybe more. And he turned them down.

Anyway, if he did take the offer and won the prize money that Hans van Kasteren, team manager for Telenet-Fidea, estimated, then he would be for sure making more money than all the salaries off all American cyclocross racers combined. By a large margin, probably by a factor of 2 or 3. Is that crazy to think? We have more participation in the sport of cyclocross than anywhere else in the world and one road rider in Europe can demand a salary more than all riders in the US combined.

As far as I can tell, only the cycling industry is cashing in on the cyclocross craze here. And I’m not so sure they are even doing that to a large degree. USAC is getting a lot more money from entries and sanctioning races. And the UCI is making a ton more money from sanctioning too, for sure. But, the riders aren’t making squat.

For cyclocross to become a viable sport in the United States, there needs to be sponsorship to pay enough for a sustainable National Circuit for professionals. That isn’t the case. It has never been the case. The travel costs for flying around the country, chasing UCI points, just for lining up at races, mainly Nationals, is astronomical. So astronomical that many riders have already started to just bail on the travel and focus on their local series. There isn’t anything wrong with that, but it isn’t going to advance the sport to the next level financially. Right now Elite level cross racing is a just hobby for nearly every racer involved.

There are only a handful of riders in Europe that make any money racing cross. Most are Belgian. There is only one other guy that gets paid what they offered Stybar and that is Sven Nys. All the other riders are on a lower level of salary, but they still make a good living racing cross.

I was mildly surprised to read that Trek is going to sponsor Sven in 2014. I don’t know if that means he rides Trek as of January 1st or after the season is over, but whatever the deal, I’m surprised. Nys has been riding Colnagos for as long as I can remember. And he probably gets paid a pretty penny for his bike sponsorship. Trek already puts some money in to their Trek Collective cross program, including Katie Compton, but for the money that they are paying Nys, I’d think they could have a pretty unbelievable Elite National program here in the US.

California Giant Strawberry/Specialized have a pretty good regional, more than regional, program going. I’d say they have the most consistence, best program for cyclocross the last decade. Anthony Gallino, czar of Cal Giant, is a huge supporter of the sport of cycling, plus a really nice guy. They have sponsored more up and coming cross riders, men and women, than any other program. Plus, they have awesome strawberries.

I’m not sure why Stybar gets to race cross and Mark Cavendish can’t race on the track, when they both race for Omega Pharma-Quick Step. That is probably because Patrick Lefevere, team manager for Omega is Belgian and probably likes cross better. Maybe he likes Stybar better too?

I hope Stybar decides to race the World Championships this year. He already has dabbled, winning his team mate Tom Boonen’s charity event again for the 2nd year in a row. In the 1st Cyclingnews article, he says that if the World’s course isn’t muddy, then he has a higher chance of doing it. That would make the race way more interesting. I’m sure we’ll see him racing over the Christmas holiday like he has the last couple years. He sort of changes up the rhythm of the “normal Belgian” tempo of a race, which makes it more exciting to watch for afar. 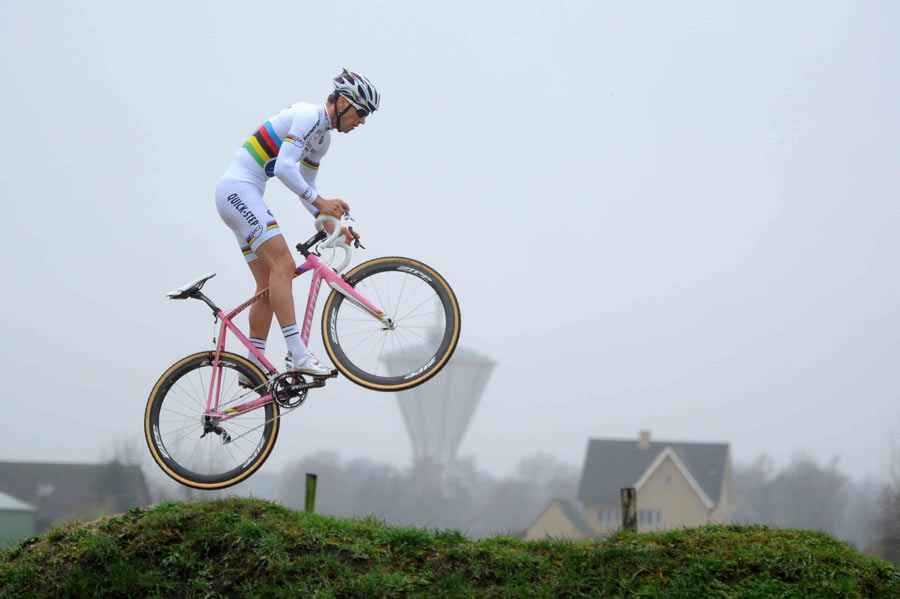 The guy has flare on a cross bike.