I’m not ready for winter. For some reason I’m colder this year than any other year I can remember. Maybe it is because I haven’t felt that great the last few weeks, but whatever the reason, it seems like winter came in too quickly.

Usually, here in Kansas, it doesn’t get really cold until January. Don’t get me wrong, December can be winter too, but it hasn’t been the last 15 years much. But, it seems like the last couple years, December is becoming December of when I was a kid. I’m not sure if it is global warming or just a weather cycle, but it is colder now than it has been.

I think part of the reason I’m not used to it being cold is because I haven’t really been doing any cyclocross. Cyclocross and cold seems to go hand in hand. When you’re doing cross races all weekend, you end up standing around in the cold for hours a day. That gets you acclimated to the cold much quicker. Plus, when you’re riding cross, you are not anywhere nearly as cold as you are when riding on the road.

Yesterday I rode Bill up north to his aunt’s house. The wind was blowing from the north at 15-20 mph. It was right around 30 degrees. I couldn’t believe how cold my face was. I usually put Vaseline on my face if I think it’s going to be bad windchill. But I didn’t yesterday. As soon as my nose started dripping and my face got a little wet, man, was my face cold. I kept trying to wipe the snot off my face, but eventually the back of my glove felt like I was rubbing sandpaper on my face. The cold felt better than trying to keep my face dry.

I was surprised that I didn’t feel that bad riding into the headwind. It was pretty hilly, a series of couple hundred meter climbs. I am so jacked up riding, I was trying a bunch of different cadences climbing off my seat, trying to figure out which muscles were working properly and which ones I needed to avoid. Man, is that pitiful. I found that if I was climbing using a low cadence, pulling up a fair amount with my hamstrings, I seemed to be the most efficient. Things aren’t going good in cycling when you have to switch up your cadence to get comfortable.

The only problem with that was I had to turn around and ride back home, mainly downhill, with a tailwind. You would think that would be cake. Not so. I turned around and was going pretty good for 10 minutes or so. Then I started falling apart. I’m not sure if I was just bonking or what, but eventually I was pedaling in squares. I pretty much fell apart less than 5 miles from my house. Destroyed at less than 40 miles. Go figure.

I drove to Kansas City to pick Catherine up at the airport at 2 pm. She was happy to get back to Kansas. The hour drive back to Topeka went pretty quickly, catching up. She is going to use one of my cars this weekend. I was grabbing all my stuff and realized that I didn’t have my phone. I was more than mildly perplexed. I thought maybe I left it at the Starbucks at the airport when I was paying. Catherine drove off to go to her mom’s. I got on the computer and used the Find my iPhone program on iCloud. When the map popped up, there was the green dot, identifying my phone in the middle of the exit leaving the airport. That didn’t really surprise me that much. I realized I left it on top of my car when I was searching my pockets for the parking ticket.

Thanksgiving dinner was in just an hour and a half and I had two hours + to the airport and back. It was torn. I was worried that my battery on the phone was going to die, thus disabling the loud ping sound that you can send to the phone to locate it. So I got decided to drive back the 80 miles to the airport to go get it. I checked every 20 minutes or so to make sure no one had run the phone over or picked it up.

It was just sunset when I got there. I pulled over on the shoulder of the exit ramp and looked down the road. I realized that if the phone was in the grass it was going to be really hard to locate. I had Trudi’s iPhone with me and was on the Find my iPhone app. I activated the sound, but the traffic noise was all I could here. When there was a gap in the traffic, I heard a faint ping. I only had to walk 20 feet or so and there it was, laying on the shoulder, right where the exit split. It was laying face down and I thought for sure that the glass would be shattered. I picked up the phone and it was perfect. The case was toast, but the phone itself was unscathed. I was super lucky.

Less than 10 seconds after I had the phone in my hand, it rang and there was Michael Fatka on the other end. I couldn’t really understand him, it sounded like I was under water, so I called him back on Trudi’s phone. Michael told me he only had a few minutes left on his phone, he must have a pay as you go deal, so we were in the middle of a conversation and poof, he was gone.

I know a lot of you don’t know Michael. I need to do a whole post on him. He was my first real sponsor in cycling. I rode the first 7 years of Elite racing on his team. He was the most important person in American cycling in the early 80’s. He took Greg LeMond over to Europe to introduce him to European teams. Our team won a ton of medals in the 1984 Olympic games. And on and on. Anyway, he isn’t really on the grid nowadays, so it is spotty making contact with him. This contact, on Thanksgiving day, was just business as usual. He sometimes comes down for Thanksgiving. I wish he would have come.

Today there is a road ride from our house at 1 pm. Since Catherine and Vincent are in town, it should be pretty fun. A bunch of guys are driving a couple hours west to go ride MTB bikes at Lake Wilson this morning. I’ve never ridden there, but am not riding off road for a little while, trying to not jar my body so much. It is supposed to be close 50 today, which is pretty much the normal high for this time of the year. I hope it stays closer to normal, because this 20 degrees below normal hasn’t been working out all that well so far.

I didn’t see any live turkeys yesterdays. For nearly the last 15 years, I’ve seen live turkeys out riding or in the fields on Thanksgiving. I guess there is always next year. 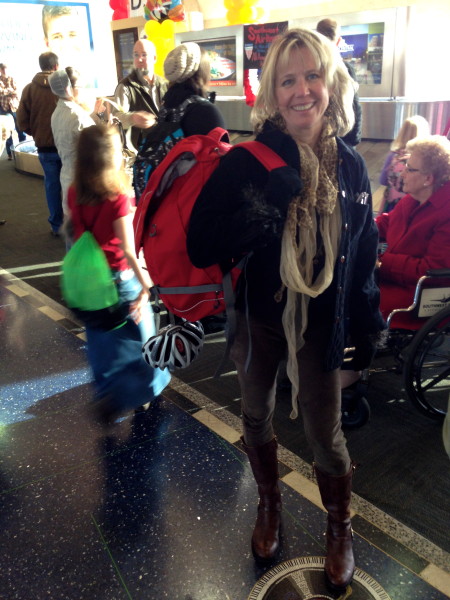 Catherine back at the Kansas City airport. 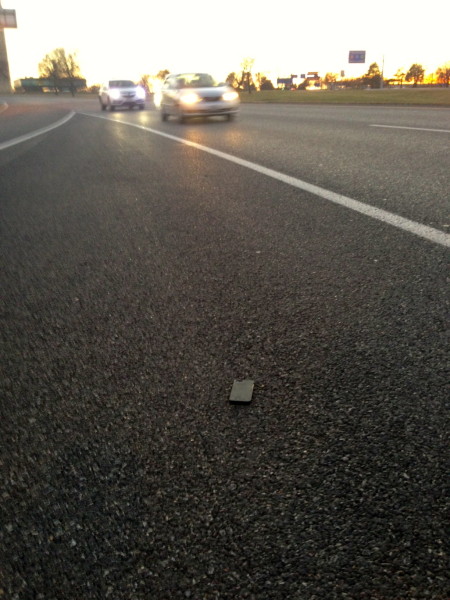 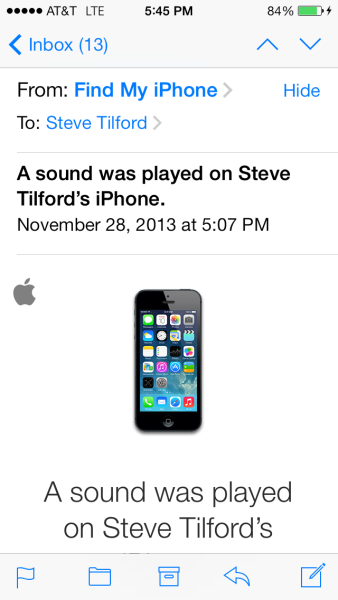 Screen when I picked up the phone. 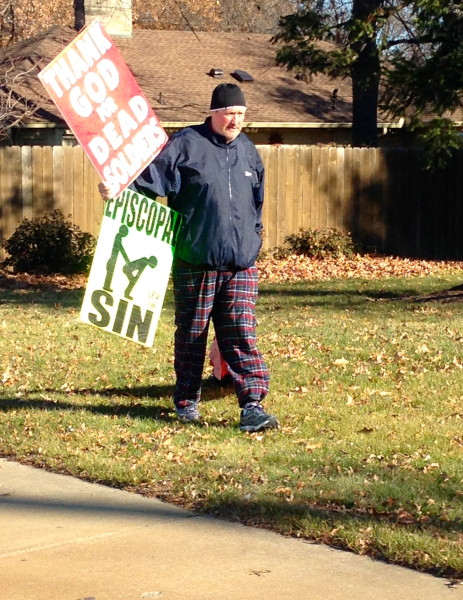 Riding out of town, I saw this Phelps idiot, doing his thing on Thanksgiving. 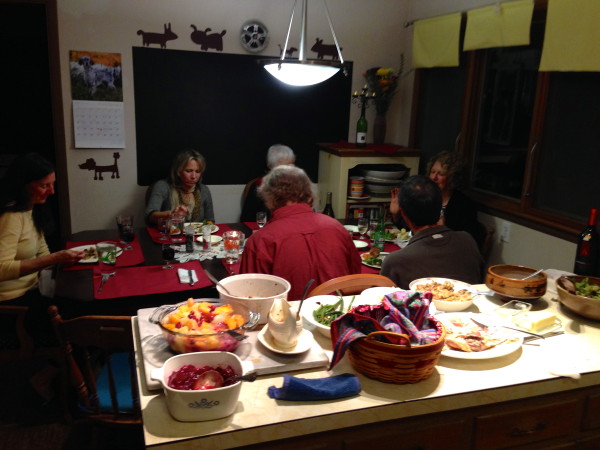 I was so late that everyone was already eating when I got back from getting my phone.

10 thoughts on “Not Ready for Winter”