I wrote most of this Friday night, then kind of finished it yesterday morning. I was surprised how many emails and comments from people I received yesterday before anything had really been released. After reading other people’s reaction to the suspension, mine now seems sort of tame. I’ve known Rich from way back. Back when he started travelling out of the state of Pennsylvania. He shared a dorm area at Doby in Austin during the Tour of Texas, one year, with Michael Dell, the Dell of Dell computers. He is a nice guy and I hate to throw him under the bus. I’ve heard the rumors for years. I talked to a friend from SoCal, that hasn’t raced since the early 90’s, and told him a “local” rider had been suspended and he instantly guessed Rich Meeker. And he is really removed from the sport. That is how prevelant the rumors were. Click on the link at the bottom and read the blog post there. He covers it from a different perspective, one of a guy that races with Rich all the time. I can’t find any fault in his thought process. I sorta hate writing about doping deals two days in row. It most likely will be three tomorrow after reading that Bruyneel is most likely not showing up for his arbitration hearing. Anyway, my post below.

I read just a bit ago at Cycling Illustrated, that Rich Meeker, a friend I’ve raced with for decades, was positive for 19-norandrosterone, which I have no idea what that is.

Rich says he did what Scott Monniger did and took all his supplements in for testing and found one to be the cause. If that is the case, then I’m wondering the reason for the 2 year ban? I thought in cases like these, a shorter ban would be given. I believe Scott’s suspension was 1 year, but that was a while ago. It did say that the ban is over as of September 2014. Maybe he hasn’t raced since September 2012? Okay, I just went and looked a his results from USAC and he hasn’t raced since September 2012. (Man, I don’t think I’ve seen a results page ever in my life with so many 1st places, ever. Wow.)

I don’t really know what to say. I haven’t raced against Rich for a really long time. He mainly does Master’s races. I’ve been told by a bunch of Southern Cal friends, that sometimes Rich is going way too good. That doesn’t make him guilty of anything, but I hate it when I’ve heard suspicions from many other riders and then a guy gets popped for doping. It seems way too coincidental.

If Rich really has a contaminated supplement case, then I hope he pursues it legally. He says he just does cycling for a hobby in the article, but it is much more than a hobby for him, after looking at his results.

I’m wondering why this is the first time I’ve heard about this doping infraction. I definitely would remember if I’d heard this before. Since it seems like he’s been suspended for a year now, where is the official release from USADA or USAC that says Rich was positive and what race it was at? I think it is really strange.

I really don’t know the deal with all the masters racers using drugs. Guys riding Grand Fondos too. I’m not sure of the exact details, but I heard from a very reliable source a while back, that a ton of masters guys were popped, I think with the Joe Papp deal, but USADA didn’t want to spend the money to bring cases against them. So somehow, maybe USAC ,USADA or someone, got the FDA involved. I think it was the FDA, anyway, the positive guys were given a choice to relinguish their racing licenses forever or they were going to face some criminal charges for buying drugs through the mail.

I thought it was bullshit. I want to know every name of every rider that gets caught. Because it is pretty hard getting caught if you’re exclusively racing master’s races. I’d say nearly impossible if you have any knowledge at all. I think every guy that has taken drugs, especially in the US at masters events, need to be shamed by their peers. None of this, you just disappear forever deal.

Like I said above, it is so weird when you hear rumors about riders, and then they get busted much later, maybe years later. It seems so crazy. If everyone knows a guy is taking drugs, I know nothing you, or anyone can do, through official channels, to report the issue. I’ve heard of local midwest riders trying to call USADA to report riders for drug infractions and the guys that I’ve talked to say it is pretty much a dead end road. I have no idea how to do it, but it seems like there should be way for suspisious activity to be reported.

Okay, I’m on a tangent here. It seems like all the excuses have been made. Nothing really surprises me in this realm much anymore. I’m not sure what Rich is going to do to show he “races clean” when he comes back in September 2014. I’m periodically accused of doping. The few others that have accused me either don’t know me or were in a state of adrenaline insanity. I have no idea how anyone could show anyone else they race clean. If someone figures that out, we should patent it.

Here’s a link I just saw to a pretty great post. The best quote of the post is – If you race masters in SoCal and you don’t understand that drugs are rampant here, you are an imbecile. 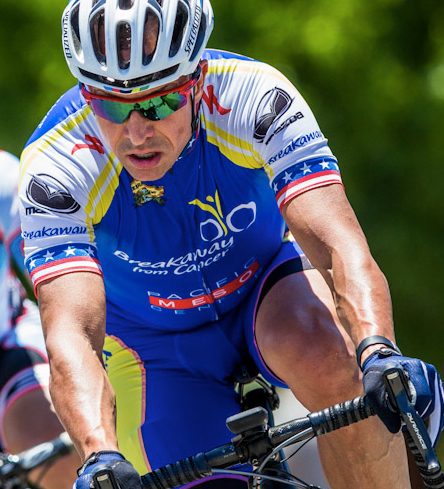 He’s looking pretty ripped here, which isn’t good for the home team in his case.