Michael Rasmussen ratted out Ryder Hesjedal. Then today Ryder says that he “voluntarily” went to USADA and kneeled in front of them, made his confession and was sent off to do 100 Hail Marys. He paid the price of self hatred and regret, because the statute of limitations seems to have expired and now he is in the clear.

It isn’t close to a surprise to me. Before Ryder raced on the road, he was super, I mean really super charged, racing off-road. His attitude at the time wasn’t of any sort of remorse or regret. He was very cocky and showed no signs of being humble. There were a bunch more Canadian MTB riders, other than Ryder, Sheppard and Seamaus, that were juiced. Velonews did an article back then about why the Canadians were doing so much better than the Americans on an international level. All the guys from BC were interviewed and their consensus was because that they were all good friends, had a Russian coach and drank the same water or something. It was so insulting at the time that I nearly wrote a letter to the editor of Velonews and just told them what was really going on.

I still need to write a post on my visit to Denver before the Tour to “witness” how thorough the Garmin Team is making sure that their riders are clean. The invite was because I’d aggravated Jonathan Vaughters so much that he wanted to present his side in person, I guess.

When Jonathan was throwing stones back at me through forums, etc. he challenged me after I implied that Ryder was “dirty” just because he rode for the Postal Service for a season. He and I both knew that Ryder took drugs to race bikes. It was so obvious.

Now I’m sort of pissed off about the whole thing. According to the article linked above, Jonathan knew all about Ryder’s drug usage and confession when he was giving me shit publicly for calling Ryder out. Pretty prick-like thing to do.

This isn’t even taking into account of all the sponsorship money these great Canadian riders took from the pitiful Americans. The American Professional MTB sponsorship completely vaporized just about the same time as the Canadian, and Europeans too, were killing everyone. There were dozens of Americans racing the international World Cup Cross Country circuit, the within a year, there were virtually none. Looking back, it seems so unfair.

I wonder if Ryder is giving back his World Jerseys and medals from racing MTB bikes juiced? I am also wondering why Ryder decided to race clean. Maybe he can write a book about it and we can all rush out and get it. No matter the reason, I’m so glad that he came to his senses, all on his own, quit using PED’s and then went on to win the Giro clean. It must be so rewarding personally for him. 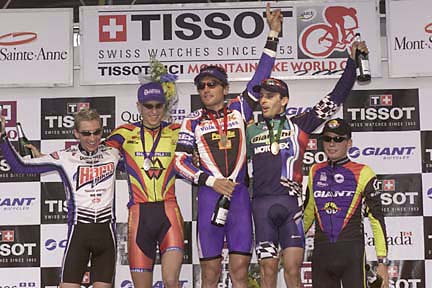 How about this podium from back in the day? What a joke. I’d pretty much quit doing World Cups by this time.