I saw this article at Cyclingnews.com about Shimano’s new road specific disc brakes. I kind of hate the whole idea of it, switching all my wheels to disc. I didn’t do it for my cross bikes yet and guess I’ll wait to see if it is going to catch on before I think about committing.

I haven’t ridden them yet personally. The review was good. I don’t think that the braking on road discs can be as good as rim braking on aluminum rims. It has to be better than braking on carbon rims.

Shimano usually does it right the first time when they delve into a new product. Way righter that nearly all other companies. I’m sure it will be the same with these brakes.

I can’t applaud them for their choice for celebrity guess speaker. None other than the one of the worst descenders/bike handlers in he upper echelon of the pro field, Andy Schleck. Here’s what Andy had to say about the new brakes

Road racer Andy Schleck, guest of honour at Shimano’s press camp, had some positive things to say regarding the disc vs rim debate.

Plenty of people have claimed that pros don’t need or want them. But Andy had a different take: “If you’re descending in the wet, especially on lightweight carbon rims then there is often water on the rim braking surface. That means you need to brake early, to give time to clear that water. In turn, that often means you are dragging the brake into corners with no guarantee of when braking is going to happen.

“On a long descent in hot conditions, they way a brake feels at the top is different to how it feels at the bottom once the rim has become hot. Mostly this results in a ‘grabby’, sudden brake feel.”

Wow Andy, the rim gets wet when you’re descending in the rain. And in hot conditions, I very much doubt the rim is any hotter at the bottom of the descent than the top other than the energy you’ve put into it by trying to slow down.

Maybe Shimano brought him in because they think that he has the most to gain from the products? But, I wouldn’t be using him as an authority on how to use your brakes properly descending. Or maybe Shimano was brillant, because Andy uses his brakes more than just about anyone else out there. 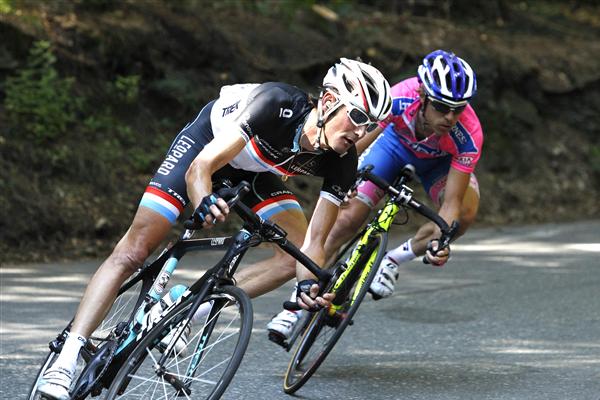 Here’s Andy in perfect Andy form. Check out his head position. And how it is different than Cunego’s. Plus, he has a ton of front brake on when his wheel is already committed to the corner. Man, no wonder he can’t descend worth a shit.