Okay, I could go into a long post about how many “issues” I had Saturday at the Berry Trail Epic. Things like flat tires, cramping, losing vision, getting lost, etc. But, the real reason I didn’t win the race was because I wasn’t in good enough shape to compete at the level needed to overcome all the things that can, and do, happen when you’re racing, out in the woods, for over 4 hours.

I had a positive attitude going into the race, but I knew that I wasn’t really in race shape. I didn’t really recognize that until maybe an hour to go, so after racing for 3 1/2 hours. I kept having problems, but kept a pretty good mentality, hoping that I was going to come around eventually.

Actually, I didn’t really need to come around at the start. I was good for maybe the first 30 minutes or so. Well, not good, but not bad. The start of the race is up a pretty steep gravel climb. I felt well within myself, but after riding singletrack for 15 minutes or so, my lungs started burning, like I’d started way too hard in a ‘cross race, without warming up properly.

My teammate, Brian Jensen, was doing his 2nd MTB race this year, maybe of his life. (He was 12th in Leadville.) He did a little micro attack a couple hundred meters up the climb and just rode away. Garet Steinmetz, who finished 2nd last year, was in form and jumped to chase Brian. I just sat on Garet and Garet knew it. He made a couple big surges, but realized it was a lost cause, so he ended up riding pretty steady up to the turn into the singletrack 3 miles in. Brian won the $100 prime, entering the singletrack in the lead.

I jumped Garet for the trail and we caught Brian just a few hundred meters in. That was pretty much it. I led for a few minutes, but Garet came by me on the first steep, loose climb a couple miles in. I rode behind Garet for the next little bit, but lost traction on the 3rd or 4th climb and he lost me.

I was still optimistic at this point. I was going better than last year, so I figured it would be fine. Then, things started happening. I’m not going to go into all of it, but I ended up stopping a lot. But, like I said above, if I would have been in just okay form, I could have overcome these obstacles.

I was going steadily downhill and didn’t quite realize it until nearly the end. I rode the last 4 hours of the race alone, somewhere between 3 and 5 minutes behind Garet, depending where on the course you timed it.

I have to admit that I do enjoy the amount of concentration it takes to race MTB bikes fast on a technical course. The Berryman Trail is so technical that if you let your guard down, even for an instant, you’ll end up seeing sharp, unfriendly rocks, up close and personal. This trail is almost 100% rock, some loose, some not. That is the reason for so many flats. And it’s 56 miles long.

Like I said above, Garet Steinmetz was going good. He rode probably 15 minutes faster than he did last year. I rode 3 minutes faster and last year the trail was covered with 4-6 inches of leaves. I was 15 minutes slower than two years ago. Maybe that isn’t so bad considering how pitiful my season has been? Garet deserved to win. He trained pretty hard for the event and it paid off for him.

I wasn’t too bad technically. I made an effort to ride cleanly and tried to rest on all the tricky sections where speed can get you into trouble. I was having a vision issue in one eye the last couple hours. It is really weird, because last year, my right eye got all cloudy about 20 minutes into the race and it stayed that way for hours after. I went to an eye doctor on the Monday after and he said what I thought happened, that I’d gotten some leg dope in my eye and it irritated it. I’ve had no issues since, until Saturday again. It wasn’t nearly as bad as last year, but it was enough to make focusing hard. Bad vision and MTB racing on rocky singletrack aren’t complimentary. I made due pretty well.

Brian rode great. He burped or cut his tire right after Garet and I passed him, stopped to put some air into it and was passed by 40 guys. He then had to make his way back through the hordes. He ended up finishing 3rd less than 10 minutes behind me. Pretty amazing considering that he’s never raced in terrain like this. Drew Edsall was ahead of him until close to the end, but flatted towards the end and Brian passed him. But, that is just part of the deal.

I got lost towards the end of the race. I stopped, went back and still didn’t know where I was. I ended up riding a singletrack that was parallel to the road I was supposed to be on, the singletrack we went out on. I knew I was off-course, I rode pretty slow back to the finish, not exactly knowing if guys had passed me or not. I told the guys at the finish that someone had removed the signs and that I rode off-course. It turns out that the majority of guys behind me in the top 10, rode the singletrack back. Scott, the race director, hurried back up the course and remarked it. No one seemed too concerned about it, which was nice. A few guys 6-10th, got their places mixed up, but everyone was good with it I guess.

Riding slow back in is an exaggeration. When I got back down to the Bass Resort, the start area, probably only 3/4 miles from the finish, I fell apart. I felt a little dizzy descending the fast road descent to the finish. Then I was done. I rode in my middle ring, up in the granny gear in the back, the last flat 1/2 mile to the finish tent. I just had enough juice to go just that far, could have hardly pedaled stroke further.

Yesterday I was pretty tweeked, not horrible, but definitely tweeked. My lungs are still a little jacked, but that is to be expected. I haven’t done any intensity for a long time.

Anyway, I can’t say enough about the event. It is great. Free stuff, loads of free food, beer, entertainment after. It’s what MTB bike racing is all about. In MTB racing, you’re racing mainly against the course, and yourself, not the other riders. It seems like there is more camaraderie.

The race was way oversold this year. Hopefully next year, the Forest Service will give these guys permission to let more riders in. This course can not be hurt by any number of MTB riders. It is rock. Even if it rained 3 inches during the race, the course would hold up fine. The Forest Service probably doesn’t have hands on experience here. If they did, they would be encouraging Scott, Jacob and the rest of their crew to be doing just what they do. They spent nearly two week riding/walking the whole trail, chainsaws in packs, removing downed trees, making the course usable for all, not just for the race. Guys like this are the people behind the scenes that make it possible for us to ride in the woods all year long. 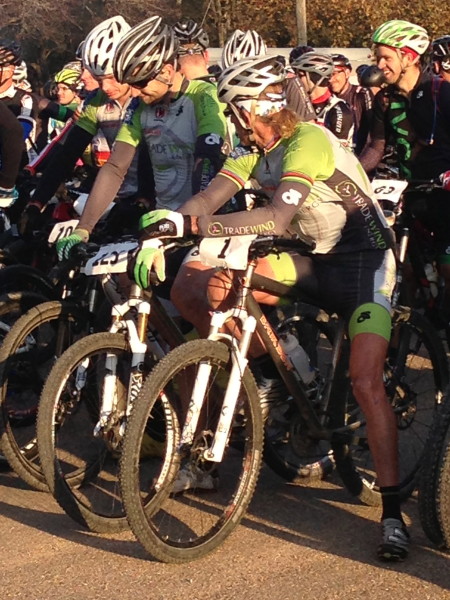 It was a little cold at the start, but not as coldas it has been historically. 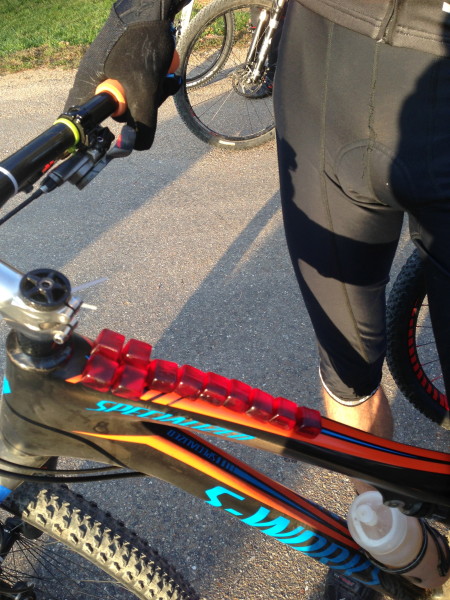 Garet blew a little at the end even though he had half the Cliff factory on his top tube. 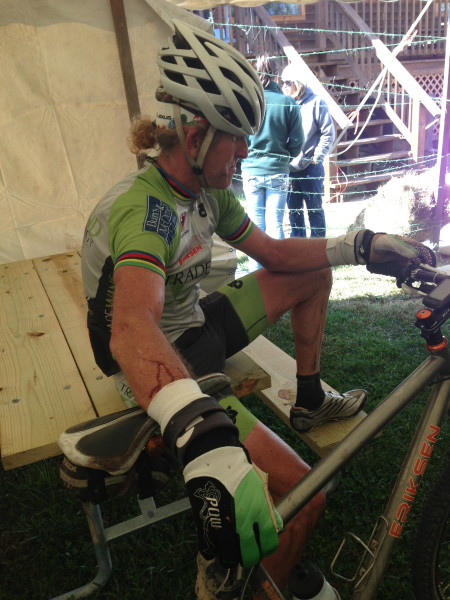 I was pretty done at the finish. 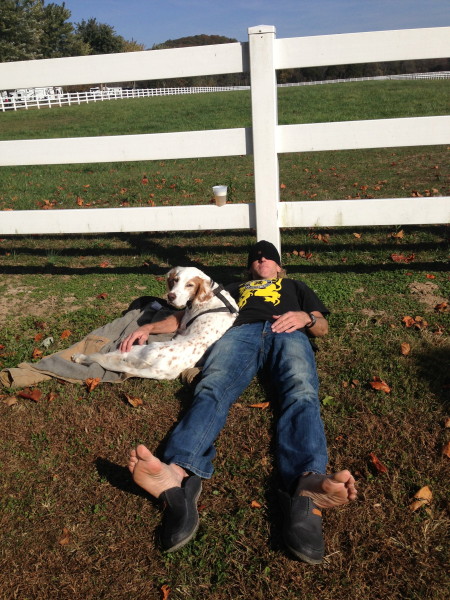 This is how I was after a couple beers. Luckily it was a few hours until awards, then the 5 hour drive home. 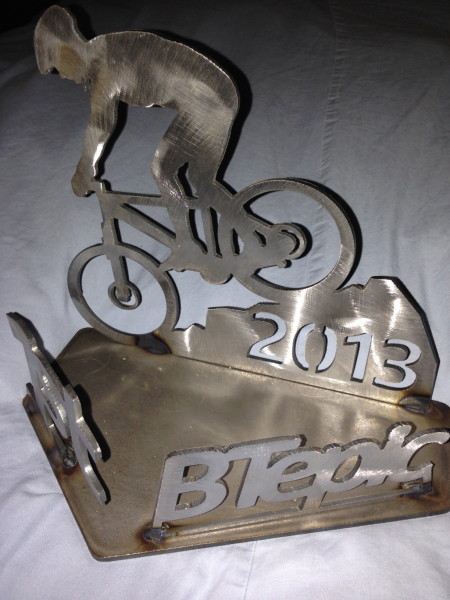 The Trophies are great. 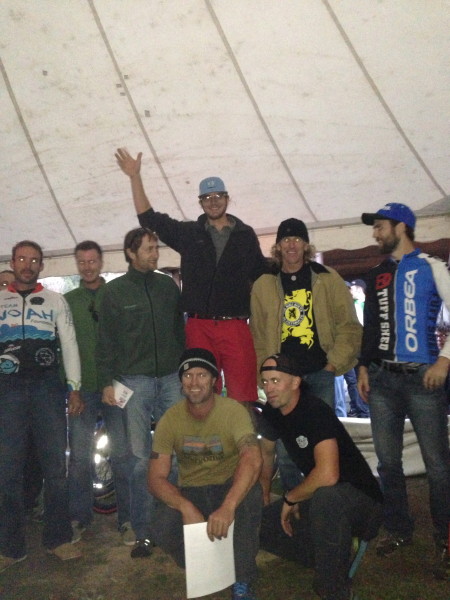 The top ten, with the promoters, Scott and Jacob kneeling. Garet had drank the better part of a keg already personally.