I’m packing to head to Dallas and realize that I need another car. Not a different car, but another one. And I’m saying this as I have a choice of at least 3 or maybe more different cars to drive. Man, we American’s are never satisfied.

Right now, what Trudi and I drive are my diesel Ford van and a Honda Insight. Pretty opposite ends of the spectrum. I bought the van close to 4 years ago specially for cyclocross. If I just took two other riders with me, that is 6 bikes. All six fit inside no problem and it gets pretty descent mileage, close to 20 mpg, driving on the highway. I have nearly 340,000 miles on it now.

The Insight is super, super small. It is mainly for driving around town. It gets somewhere in the 50+ mpg range in town. But, trying to travel in it, with just one bike is a hassle. Especially a bike my size. There is no room for luggage, Bromont, anything.

I also own two old VW pickup trucks. Both 1964, one a single cab and one a double cab. Plus a couple Saab Sonnets. The Sonnets and double cab haven’t ran for a while and are in garages. The single cab was the first car I ever bought, back in 1977. I plan on restoring them all eventually, but eventually always seems to be further away than it was the day before.

I only buy used cars. Usually, pretty cheap used cars. I paid $4000 for the diesel van and have driven it nearly 200,000 miles now. I like that about diesels. It is extremely difficult to work on, but that was known when I bought it.

I need a medium size car that I can take two people, plus Bromont, two bikes, plus luggage. I rented a small minivan in England a few years back. It was a Kia something and driving at super fast highway speeds, 90+, it got nearly 40 mpg. I don’t understand why there isn’t something available like that here in the US. It is nearly impossible getting another that carry anything that gets in the high 30’s for mileage.

When Dodge came out with the Caravan, back in the 80’s, they had a 4 cyclinder, manual transmission model that got over 35 mpg and that was over 30 years ago. Since then, our worrying about fuel economy has went out the window. Sometimes I wish that gasoline prices would just go up to $5 a gallon and stay there. That way, automobile manufactures would be “forced” to make something that the public would demand, a bigger vehicle with great mileage. But, the way I buy cars, it would still be a few years down the road before I ended up with one. 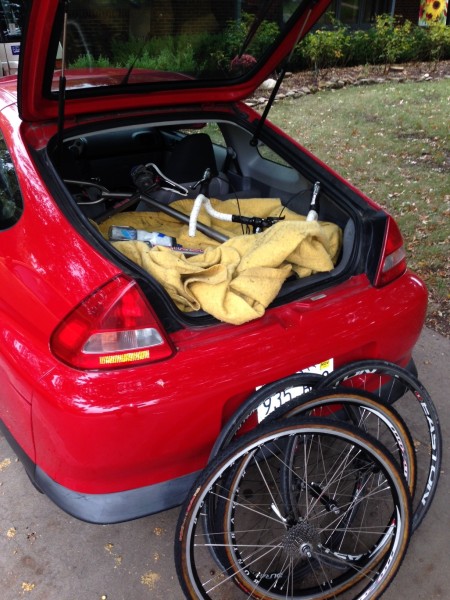 By the time I pack a couple sets of wheels in, there isn’t much room left for anything else.